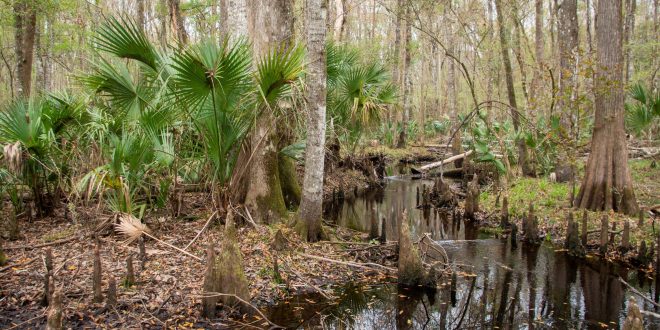 HAWTHORNE — The sale of a 605-acre natural area has secured protection for both the local ecology and the legacy of a family matriarch.

Alachua County Forever, the county’s environmental land acquisition program, purchased the land for $1.5 million on Aug. 26 from five siblings whose late mother had entrusted them with the land. The property is adjacent to the Phifer Flatwoods Preserve, which also is managed by ACF, north of Lochloosa Lake.

“We absolutely loved it. It was a magical place to grow up,” Ron Delk, one of the siblings who sold the land and the one who was in charge of the trust, said. “We also knew that it was an environmentally important piece of property.”

The siblings involved in the sale — Delk, Alice Braddock, Wilda Carter, James Delk and Sandra Worsham — are the children of Carrie C. Brown, a Hawthorne woman who died in 2020 at the age of 104.

Ron Delk, a real estate agent in The Villages, said that his mother had told him and his siblings that if they take care of the land, the land will take care of them. It was her emphasis on preserving the nature of this property, which had been in their family since the 19th century, that led Delk to contact both the county and the state about purchasing the site for the sake of conservation.

Tom Hutcheson, who has been Delk’s partner for 42 years, discussed his admiration for the resolve with which Brown supported her family and property.

“It’s important to know that Ms. Brown was really a pioneering woman for her time,” he said, noting that she owned a business in addition to managing the property and raising her children. “She was pretty much an entrepreneurial sort of woman but with an interest in maintaining her family and keeping that land.”

Delk emphasized the purity and beauty of the area as a motive for preservation.

“We didn’t really want the land to be developed because it’s beautiful,” he said. “It has the creek running through it, so we wanted it to be conserved.”

He went on to express hope for the establishment of public recreational opportunities so that people will be able to appreciate what he described as the magnificence of the land.

“This is something that we have enjoyed as a family for years, and it’ll be nice to have future generations enjoy it,” he said.

The county will now look to capitalize on the opportunity to protect what was previously a missing link in the surrounding network of protected land. Specifically, the plan will focus on enhancing and maintaining the area’s rich ecosystem, which includes wetlands, pine flatwoods, floodplain swamps and mesic hammocks.

This property is particularly significant because it falls within the Florida Wildlife Corridor, a statewide collection of lands identified as ecologically crucial, and also contains over two miles of Lochloosa Creek, a vital linkage to Lochloosa Lake. The latter is designated as an Outstanding Florida Water, meaning the state legislature recognizes its exceptional ecological significance and deems it worthy of special protection.

The conservation efforts will begin with field surveying, during which ACF will identify areas and resources most in need of restoration. The field survey will be followed by the drafting of a management plan that will detail specific procedures to improve and maintain habitat quality over a 10-year period.

ACF bought the property with funds provided by the Wild Spaces and Public Places half-cent sales tax, which Alachua County voters re-approved in the 2016 election. This fund, which is used for areas identified as the most sensitive and critical to protect, has facilitated the acquisitions of almost 33,000 acres by the county since the program’s inception in 2000.

“Protection of all of those different corridors and ecosystems would not be possible in Alachua County without the support of the voters and funding for the Wild Spaces and Public Places initiative through the surtax,” said Andi Christman, manager of the Alachua County Office of Land Management and Conservation. “…it’s a unique story of a commitment of a community to look towards the future, and it’s been incredibly successful.”

Christman noted that the recently acquired property also has strong potential for public recreation opportunities, partly due to its accessibility via County Road 2082. She highlighted the importance of low-impact public use, which eschews any type of clearing or development and instead favors minimalistic amenities such as unpaved trails for hiking or biking.

“This site is gonna be a very good site for public access once we’re able to go through the management plan process,” she said. “To help them visit the site in a respectful and safe manner, but that also allows them to better understand the natural ecosystems in this wonderful part of Florida.”

Although they had to smooth over some disagreements about certain details of the deal, the five siblings agreed that selling the land, with a stipulation guaranteeing ecological protection, was the best way to honor their mother’s wishes.

Benjamin is a reporter for WUFT News who can be reached by calling 352-392-6397 or emailing news@wuft.org.
Previous ‘Recovery is possible’: UF Health Florida Recovery Center and other recovery organizations try to increase awareness of substance use disorders
Next Original Gainesville activists reconvene, continue marijuana decriminalization battle