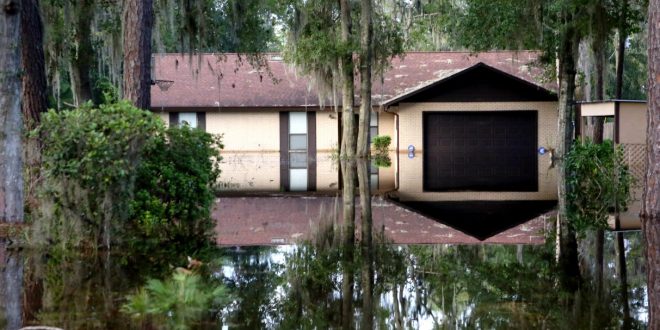 This week marks five years since Hurricane Irma hit Florida. Nearly the entire peninsula was under a hurricane watch or warning by the time the storm reached Florida’s southwestern shore. An incredibly strong storm, the damage brought by Irma contributed to the most expensive year of weather events ever, totaling over $300 billion across 16 events.

As of July 2022, federal assistance to households and communities who sustained damage after Irma have totaled $5.58 billion. According to the CDC, Irma caused the death of 123 people in Florida. Notably, Irma also caused a massive evacuation of an estimated 6.8 million Floridians, displacing roughly a third of residents and visitors.

Half a decade later, we look back at Irma’s impact and the changes in hurricane preparedness and response that it brought to Florida.

Irma started as a tropical wave off the west coast of Africa on Aug. 27, 2017. Just three days later, satellite imagery indicated that the surface circulation had become well-defined and deep convection was sufficiently organized. Later that same day, the ninth system of the season was named: Tropical Storm Irma.

By Aug. 31, Irma developed a ragged eye. Within 30 hours of being designated a tropical depression, Irma became a hurricane. Only two days after developing, rapid intensification allowed Hurricane Irma to reach major hurricane status. Between Sept. 2 and 4, Hurricane Irma moved over warmer sea surface temperatures. This allowed Irma to grow and strengthen even more, reaching Category 5 status on Sept. 5.

The hurricane then passed over Cuba and weakened slightly to a Category 4 before making landfall in Florida on September 10 near Cudjoe Key with maximum winds of more than 130 miles per hour. Later that day, Irma would go on to make its final landfall near Marco Island, Florida, as a Category 3 hurricane with winds of 115 miles per hour. Once inland, Irma quickly weakened due to interaction with land and increasingly strong wind shear. While Irma did undergo a rapid weakening trend through September 10, the extent of tropical storm-force winds was quite large, extending more than 400 miles from the center.

By September 11, Irma weakened to a tropical storm just west of Gainesville, Florida. As it continued northwestward into Alabama, Irma became a remnant low before eventually dissipating over southeastern Missouri on September 13.

“Irma was a classic Cape Verde hurricane,” said Robert Molleda, Warning Coordinator Meteorologist at the National Weather Service in Miami. “They form during the peak of hurricane season, if the conditions are right.”

Hurricanes of these kind can reach major hurricane status early on and maintain their intensity for a long period. Irma maintained 185-plus mile per hour winds for over 36 hours. Because the storm formed so far east, the silver lining is that there was several days to prepare.

“It was the first major hurricane to hit Florida since Wilma,” which hit in 2005, Molleda said. “Some hurricanes don’t give us that luxury to prepare, so we could track it before it even became a threat.”

In his role as warning coordinator, Molleda worked to brief South Florida leaders as they made decisions on public safety.

“We don’t work in a bubble,” Molleda said “all these agencies, we work together, and that organization is so important, especially in a case like Irma.”

Though South Florida ultimately experienced something closer to Category 1 conditions, Molleda emphasized 80 or 90 mile per hour winds are still very dangerous. Molleda also points out the fact the storm stayed over land also helped bring wind speeds down. If the storm would have tracked just a few miles west, he said, the center of the storm would have passed over the coastline, making the effect of storm surge much more severe.

The National Weather Service was prepared for storm surge that year. 2017 was actually the first year storm surge warnings were issued in addition to hurricane warnings, which warn for wind. Though introduced before Irma, the storm proved to be the testing ground for these new warnings.

“We made these separate warnings to make sure people understand the real threat of storm surge,” which Molleda points out is the leading killer during a hurricane. “We need people to not just receive the information but also understand it.”

The biggest challenge of Irma, Molleda said, was not Irma’s impact on one single location, but the fact it traveled up the peninsula, affecting so much of the state’s population. “It’s the amount of people being affected,” Molleda said, “imagine all of those actions that need to happen in each of those counties. Now magnify that.”

Millions on the move

“What was unique about Irma was that it affected everything from small, fiscally constrained counties around Lake Okeechobee to big cities like Tampa, St. Pete and Miami,” said Kevin Guthrie, director of the Florida Division of Emergency Management. At the time in 2017, Guthrie was a public safety administrator in Pasco County. Following Irma, Guthrie was asked by state administration to assist with response and spent seven weeks with the Division.

“It affected people across the socio-economic table. This hurricane did not discriminate,” he said.

Because Irma covered so much territory, the storm put a strain on the emergency response system.

“All emergency managers need the same resources,” Guthrie said, “so when you have 47 counties asking for those resources, you have to start prioritizing.” The Division had to bring in 33 teams of first responders from other states to meet the needs of affected counties. Additionally, according to FEMA nearly 3,000 federal workers from 40 agencies were also deployed to Florida.

But as help streamed into Florida, many fled, or attempted to flee the hurricane, causing a migration that further clogged up the recovery process. According to Florida Department of Transportation, the state of emergency declared by then-governor Rick Scott spurred 23 counties to order mandatory evacuations. The rapid spike in demand of gasoline and high traffic made it difficult for distributors to keep up, stalling or stranding evacuees.

“It’s estimated that 3 to 4 million people evacuated that did not have to evacuate,” Guthrie said. The Division promoted a program called Know Your Zone, Know Your Home. It instructs only those people who live in an evacuation zone to leave when put under an evacuation order.

“If you do not live in an evacuate zone and are not being asked to evacuate, it’s important to know your home and what kind of conditions it can withstand,” Guthrie said. Guthrie said people can learn more about the code by working with their local property appraiser. “After you find out when your house was built, you can find out what the code was at that time.” The Florida Building Code was implemented in 2002. For older buildings, there are ways to retrofit your home.

The Division now aims to reduce unnecessary evacuation in part because it can slow down first responders.

“If you evacuate, and your house is still standing, or it still has power, you’re likely going to want to get back into that area,” Guthrie said, “the problem is, the hurricane likely did damage between Point A and Point B.” Those evacuees will then get on the same roadways as first responders. “Every time a truck has to move or stop, they’re pausing the recovery process.”

This advice does not apply for special needs residents, however. If somebody uses medical devices which require electricity to operate, and cannot risk a power outage, Guthrie encourages those individuals to get enrolled in a special needs shelter through their local emergency management office or make other plans to evacuate.

Guthrie said the emergency management community learned several valuable lessons following Irma in addition to these evacuation recommendations. “There were areas that went weeks without power,” Guthrie said, “so historically, we asked for people to prepare three days of supplies. After Irma, we recommend 5-7 days.”

The more rural someone lives, the more they may want to store up as they may be longer without power as compared to someone in an urban area. “The most important thing is to know your own personal situation.” Guthrie also hopes people will look to local resources and evacuate closer to their community when the next hurricane hits.

“There’s this myth you have to get out of the state completely,” he said, “you can evacuate just tens of miles away and be safe.”

Lessons we learned from Irma

The Florida Public Radio Emergency Network (also known as Florida Storms) was founded as an opportunity for public media in Florida to play an impactful role in weather forecasting and public safety statewide. The organization was launched in 2012 for the 2013 hurricane season. Now a team of three meteorologists and one journalist, the team was made up of just two meteorologists back then. FPREN is located within the College of Journalism and Communications at the University of Florida but distributes its content to the 13 public radio stations in Florida.

Hurricane Irma proved to be a testing ground for FPREN’s model, which allows the team to cut into broadcasts in markets that are being affected by severe weather. Due to Irma’s long track through the state, the FPREN team maintained continued coverage for about a two-week period. Meteorologists marathoned live coverage for 92 hours during the peak of the storm event. Irma ended up being the organization’s first long-duration event.

Though there was plenty of exhaustion, coverage of Irma proved FPREN’s impact keeping communities across Florida informed during a weather crisis. FPREN was honored at the Governor’s Hurricane Conference in 2018 with the Public Information Award and again in 2019 by the Corporation for Public Broadcasting with the Community Lifeline Award for coverage of Hurricane Irma, as well as Michael and Matthew.

Melissa Feito is a multimedia producer for Florida Storms and the Florida Public Radio Emergency Network (FPREN). Reach her with questions, story ideas or feedback at mfeito2@ufl.edu.
Previous The Point, Sept. 9, 2022: Gainesville police investigations find no policy violations in K9 use that took a man’s eye
Next Orphans fleeing the war in Ukraine are receiving aid from a Florida-based nonprofit