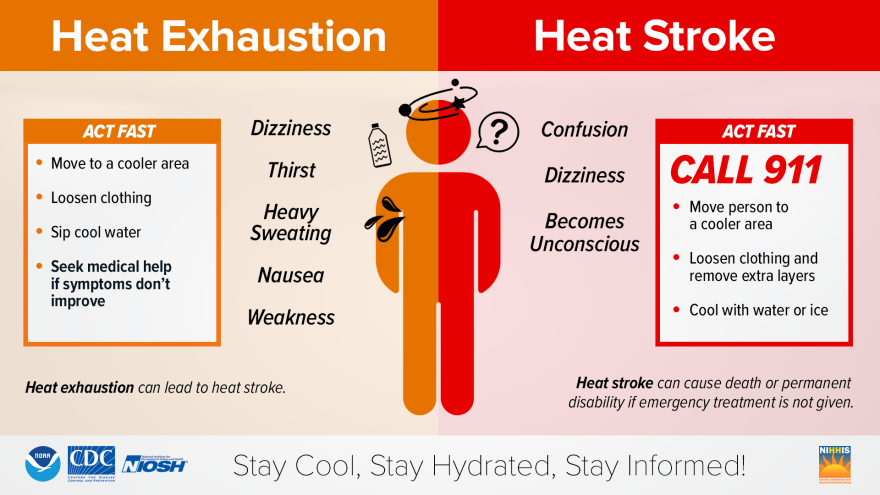 Today is the first day of summer and Florida is seeing a return of last week’s heat wave after a reprieve over the weekend. With soaring temperatures comes high heat that could prove a danger to vulnerable people like young children, the elderly and those exposed to the outdoors for long periods of the day.

Dr. Tim Hendrix is the medical director of AdventHealth Centra Care in Orlando.

“There are two types of heat illness that can occur,” Hendrix said.

“These are the kinds of patients that are most at risk for ending up in the hospital for heat stroke,” Hendrix said.

For those who may not be able to help themselves, heat stroke can lead to brain damage. If someone is experiencing worsening symptoms and erratic or confused behavior, it’s time to call 911. Hendrix recommends checking in with elderly neighbors or relatives during this time to make sure they aren’t being adversely affected by the heat. And for infants, to be careful when going about daytime activities that may heat them up.

“Don’t leave a child in the car,” Hendrix said, “The heat rises very quickly, and this is when we see infant deaths.”

Most people, however, will be able to treat themselves if they recognize symptoms like fatigue, shakiness, dizziness and nausea by drinking cool fluids, heading inside and resting.

Hendrix recommends planning your activities and pacing yourself.

“For example, do your yard work first thing in the morning, when it’s still cool,” he said.

Some don’t have the opportunity, however, of choosing when to cool down. According to Hendrix, those who work outdoors such as landscapers, construction workers and agricultural workers are more acclimated to outdoor work than someone who is typically indoors all day long. But that doesn’t make heat illness uncommon in that occupation.

“Employers need to recognize they need to take heat breaks and make sure there are plenty of fluids available,” Hendrix said.

Nezahualcoyotl Xiuhtecutli, the general coordinator of the Farmworker Association of Florida, notes that the competitive nature of the industry is a huge contributor to heat illness in the field.

“Your earnings are based on the amount of crops you pick,” Xiuhtecutli said, “so if you stop working, you stop earning.”

In short, they are not incentivized to take a break. According to OSHA, high temperatures, low air circulation, direct sun exposure and low fluid consumption are all a recipe for occupational heat-related illness.

Though employers do provide some resources, Xiuhtecutli said, often workers need to walk off the field and a long distance to access water and shade.

“If someone is feeling sick, they’re at risk of not making it there on time,” Xiuhtecutli said.

Accessing medical attention can be a challenge, Xiuhtecutli said, because workers may not be able to pinpoint their exact location outdoors. Many farmworkers and other low-income people also don’t have access to adequate cooling at home.

“So it’s really difficult to cool off during the night,” Xiuhtecutli said, “they wake up already dehydrated.”

Xiuhtecutli recommends those who work outdoors use the OSHA Heat Safety Tool App on their device to track heat conditions. He also recommends setting reminders for re-hydrating and taking breaks or reminding each other to drink water when working in a group. Wearing a broad-brimmed hat can protect the face, neck and shoulders from the sun. Wearing loose-fitting light-colored clothes also helps mitigate the risk of heat illness.

Melissa Feito is a multimedia producer for Florida Storms and the Florida Public Radio Emergency Network (FPREN). Reach her with questions, story ideas or feedback at mfeito2@ufl.edu.
Previous The Point, June 22, 2022: Florida Law Targeting Social Media Giants Could Be Headed To U.S. Supreme Court
Next The Point, June 23, 2022: Publix Will Not Offer The COVID Vaccine For Children Under 5 Years Old