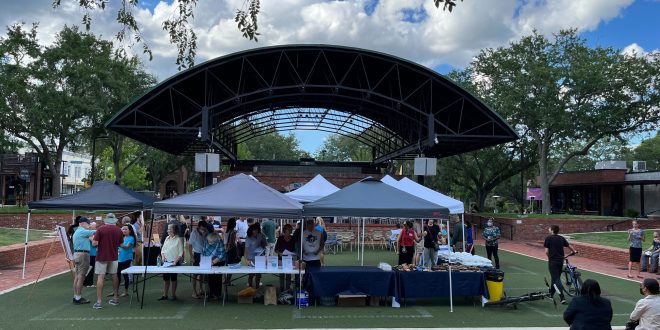 A crowd of around 70 gathered at Gainesville’s Bo Diddley Plaza Wednesday for a workshop with city officials to discuss new affordable housing initiatives for the city. (Jonathan Lamberson/WUFT News)

“Gainesville, we have a problem. And it’s the lack of affordable housing,” said Corey Harris, the city’s new senior housing strategist.

Those housing problems that Harris mentioned are a growing difficulty within Gainesville that has directly impacted some of the city’s long-time residents. Before a crowd of about 70 people, Harris presented numerous graphics that showcased troubling statistics of the disparity between renters and their median income.

“Close to 16,000 households are cost-burdened, with the most impacted being those that make 50% less than median family income,” Harris said. Cost-burdened households are defined as anyone who spends more than 30% of their income on housing.

One of the topics highlighted at the meeting was the steep, continual increase in the cost of rent for long-time Gainesville renters.

Gainesville resident Lee Malis was one member of the crowd who pointed out that affordable housing units behind his home were displaced to make room for the construction of a new apartment complex, subsequently doubling his rent over the past five years.

“We have a problem,” Harris said of the statistics.

Spearheading a solution to this problem for the city is Christiana Whitcomb, a director at HR&A, a company that focuses on real estate and economic development strategies for local governments. Whitcomb and HR&A conducted a study focusing on the implementation of inclusionary zoning and exclusionary zoning, to overcome some of the obstacles facing the city’s renting market in Gainesville.

Whitcomb defined inclusionary zoning as a tool that developers utilize to create affordable housing within a new market or residential development. One example Whitcomb introduced for inclusionary zoning is having 10% of new-market rental units priced at an affordable rate, while the other 90% remain at market value. According to Whitcomb’s report, if a 10% zoning policy was set aside between the years 2018-2020, 250 affordable rental units would have been created in new-market apartments in Gainesville.

For exclusionary zoning, Whitcomb pointed to the increase in economic and racial diversity in neighborhoods as a key facet of the proposal. Whitcomb described the solutions to these issues as developing housing at lower price points to increase affordability within the city.

Much of the audience remained disgruntled, even amid the city’s proposed zoning strategies.

“It seems like what the city is doing is trying to make up for the fact that this IZ (inclusionary zoning) could’ve been enacted before all of the condominiums up and down University and 13th, but they missed the boat,” said Gainesville resident George Wilson. “Now we’re being called upon to make up for the fact that they didn’t know what they were doing in the first place.”

Residents can have a second opportunity for their voices to be heard at the city’s second affordable housing workshop, scheduled for 9 a.m. to noon on Saturday at Bo Diddley Plaza.

Jonathan is a reporter for WUFT News who can be reached by calling 352-392-6397 or emailing news@wuft.org.
Previous The Point, June 2, 2022: What to expect in Florida as the Atlantic Hurricane Season begins
Next Floridians looking for a way out under record-high fuel prices