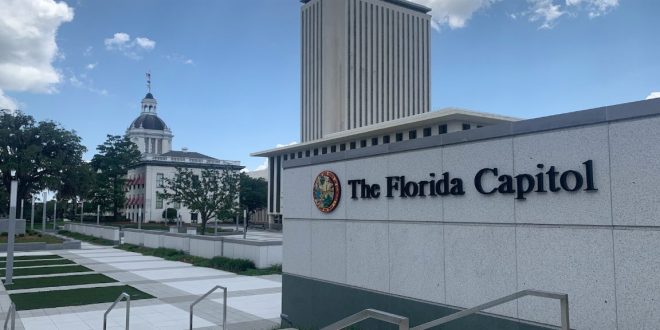 The Florida Senate and the Florida House of Representatives have until Friday at 11:59 p.m. to come to a final agreement on property insurance law changes and pass legislation to the governor’s desk. (Maria Victoria Camacho/ WUFT News)

May 25, 2022 Government and politics, Statewide, Weather

Additionally, the House added two new pieces of legislation to Wednesday’s agenda, regarding condominium reform after the tragedy that occurred in June 2021 north of Miami Beach when a Surfside building collapsed and killed 98 people. These bills will be discussed on Wednesday after lawmakers agreed to extend the session another day to be able to analyze possible solutions to safety regulations.

During the 2022 regular session, leaders from the House and Senate failed to agree on a bill that could help prevent another tragedy on Florida’s coast like the one in Surfside. A general bill, CS/HB 5D, was filed Tuesday to help address the pitfalls in state regulation of condo inspection.

The speaker of the Florida House announced during Tuesday’s meeting that Rep. Daniel Perez, R-Miami Dade, was the person who persuaded the committee to include the bill in this session’s agenda. Two-thirds of the members of the House then voted in favor of the bill.

Perez said the reason why he was pushing so hard for these bills to pass was because of the relationship he has with the families from Surfside.

The bill states a new set of measures that requires certain changes in the inspection process for the condos. For instance, once a condominium reaches 30 years, it will need a special inspection. After the building is 30 years old, the inspection is expected to be done every 10 years. However, these rules only apply to buildings that count three or more floors. Condos on the coast will require an inspection when buildings reach 25 years of age.

Perez also commented on the issue of property insurance and restated that it is a process that will take some time. Thus, lawmakers are now trying to deal with both pressing issues of insurance and condo safety.

However, while Sen. Randolph Bracy, D-Orlando, considers these to be important issues that must be addressed, he said other issues such as rent prices also should be heard. Lawmakers in control of this week’s agenda have not shown interest in tackling them by Friday.

Bracy discussed Tuesday what he would like to see accomplished.

The legislature is looking forward to minimizing additional rate increases and relief for the insurance companies.

“It is a long-term problem that deserves a long-term solution,” said Rep. Christine Hunschofsky, D-Parkland. “Unfortunately, we are not going to be able to fix those problems during this week. There are so many good things on the bill, but do not go far enough.”

Lawmakers have not heard anything that would solve everything and do it quickly. However, Hunschofsky said there are minimal improvements in various areas such as, “insurance issues, some of the fraud issues, but nothing here is promising property insurance would go down.”

July 1 would be the effective date of everything lawmakers pass in the session. Rep. Yvonne Hinson, D-Gainesville, noted that home insurance is the primary protection Floridians need for their homes.

“We are having a housing crisis. However, people need what they need,” Hinson said. “They need access to affordable housing, and they need to be able to buy a home.”

Hinson also mentioned that affordability and availability are issues that would need to be addressed in another special session, or perhaps during next year’s regular session.

During Tuesday’s proceedings, a group of anti-abortion protesters showed up at the capitol to advocate for a special session. Andrew Shirvell, executive director of Florida Voice for the Unborn said the 20 or so protesters were there “to protect the unborn brothers and sisters.” They asked that lawmakers in committee meetings should dedicate time to discuss abortion in either this or another special session. Politico on Tuesday reported that lawmakers could discuss a total ban on abortions during the 2023 regular session, which starts in March.

Chris Sprowls, speaker of the Florida House, announced the possible end of the special session on property insurance and condo safety legislation for Wednesday, following a final review of the three bills and voting.