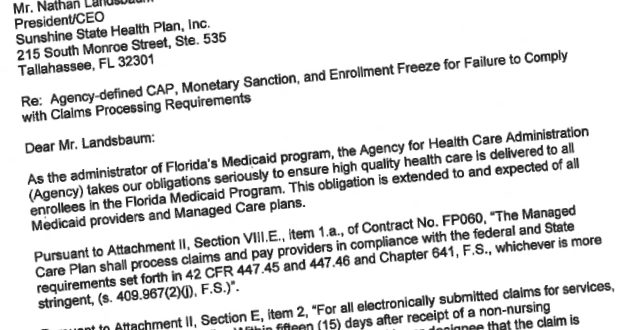 An excerpt of a disciplinary letter sent March 17, 2022, to Nathan Landsbaum, the chief executive of Sunshine State Health Plan Inc. of Tampa, Florida, by Brian Meyer, the assistant deputy secretary of Florida's Agency for Health Care Administration. The AHCA fined the company nearly $9.1 million failure over nearly three months to pay tens of thousands of health-care claims for the state's sickest and neediest children.

The deadline set by Florida lapsed for its largest Medicaid payment vendor to challenge a nearly $9.1 million fine over the company’s failure for nearly three months to pay tens of thousands of health-care claims for the state’s sickest and neediest children.

Sunshine State Health Plan Inc. of Tampa had until 5 p.m. Thursday to dispute the large fine imposed last month by its government regulator, the Agency for Health Care Administration, leaving the company with only the option to concede to pay. “Sunshine waives any dispute not raised within 21 days,” the government had warned the company March 17.

An agency spokesperson confirmed Friday that Sunshine State did not file any administrative challenge before the deadline. It must pay the fine – which amounted to $75 for each failure to pay a claim – by April 18. Florida acknowledged that the company’s failures it blamed on technology glitches over nearly three months were “non-willful.”

The payment problems left families in Florida with critically ill children who relied on Medicaid-paid health providers stranded. They affected children receiving care under the company’s Sunshine Health Medicaid program and the Children’s Medical Services Health Plan it operates on behalf of the Florida Department of Health for patients under 21 who are eligible for Medicaid and who have serious, chronic conditions.

Some smaller health providers temporarily shut down because they could no longer afford to pay nurses, therapists or other specialists without timely reimbursement under Medicaid from Sunshine State. Other companies were forced temporarily to cover the costs, effectively floating loans to the health-care giant until they were paid.

Some providers said they were still experiencing billing issues with Sunshine State.

Sunshine State previously said the glitches stemmed from the company’s merger on Oct. 1 with the second-largest payment vendor, WellCare of Florida Inc. Combined, Sunshine and Wellcare have multi-year contracts worth $31.6 billion from the state’s Agency for Health Care Administration, according to figures from the state’s chief financial officer.

In its sanctions announcement, the Florida agency demanded detailed explanations for how the problems occurred and how the company responded. It also required the company to demonstrate within 30 days that future claims were being paid promptly and asked for weekly updates in phone calls with the CEO, Nathan Landsbaum, or another senior executive.

In a statement this week, the company declined to say whether it intended to pay the $9,092,025 fine. It pointed to its earlier public comments on the matter that included an apology to health-care providers and a promise to quickly address any outstanding issues.

“We know that we created a number of challenges for our partners that did not meet the standards we set for ourselves or our contractual obligation to the state of Florida,” the company’s statement said.

Investors seemed unconcerned about the fine: The stock price of its parent company, Centene Corp., closed Thursday close to its price the day Florida announced its sanctions on March 17. Centene did not mention Florida’s sanctions, including its decision not to contest the fine, in securities filings.

This story was produced by Fresh Take Florida, a news service of the University of Florida College of Journalism and Communications. The reporter can be reached at kristin.bausch@freshtakeflorida.com. You can donate to support our students here.

Kristin is a reporter for WUFT News who can be reached by calling 352-392-6397 or emailing news@wuft.org.
Previous Dixie County is still recovering from flood damage with hurricane season around the corner
Next The Rewind: Week of April 4, 2022