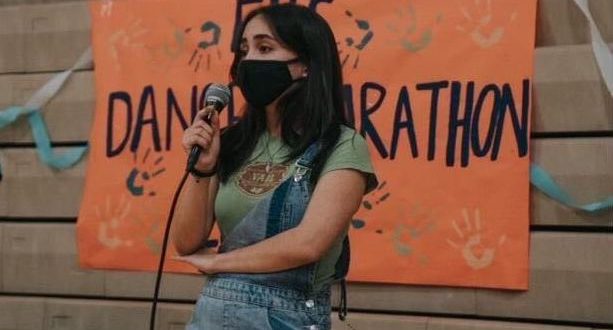 One Gainesville student’s journey through childhood illness and Dance Marathon

Elizabeth ‘Elie’ Chapman is a 15-year-old freshman at Gainesville High School. She’s a setter on the junior varsity volleyball squad and currently plays for the Gainesville Juniors Volleyball club team. She enjoys school. She dreams of traveling the world one day.

That’s how the Children’s Miracle Network identifies patients across the country who also serve as ambassadors for the national organization. At high schools and public universities across the country, an annual fundraising event called Dance Marathon raises money for hospitals in the Children’s Miracle Network. In Gainesville, DM at UF benefits the patients at UF Health Shands Children’s Hospital.

This year’s event is scheduled for March 26 and 27. The Chapman family plans to speak about Elie’s story with glycogen storage disease, GSD, at the event to help spread awareness about the condition.

At 6 years old, Elie was diagnosed with GSD, a rare condition in which the body is unable to store or completely break down glycogen into glucose. This process occurs when the body needs a boost of energy.

“It was scary for all of us because it was the unknown,” Elie said. “We had no idea what we had just been introduced to and how large this would impact the rest of my life.” 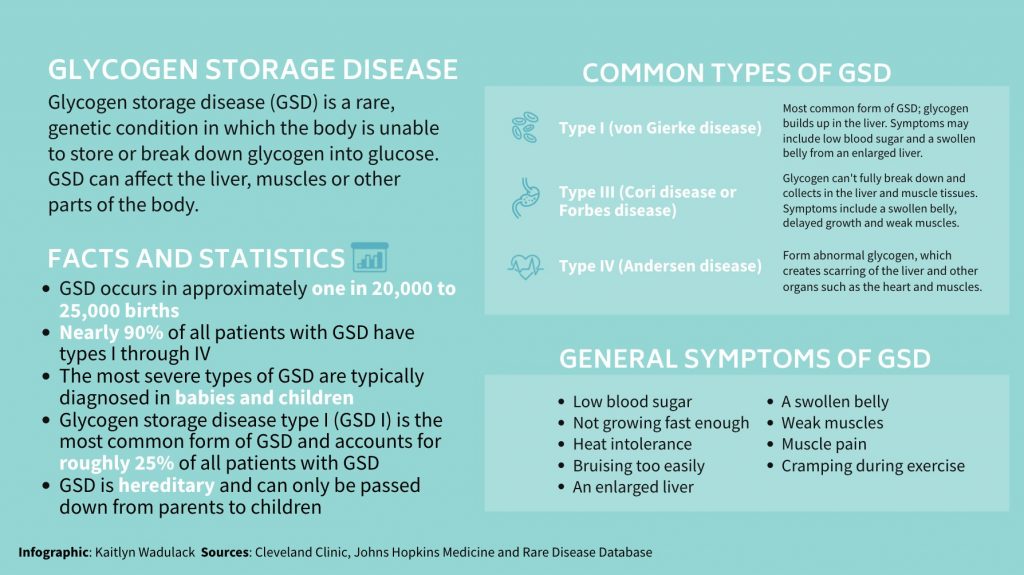 When Elie was in kindergarten, she was brought to the hospital after becoming frequently ill despite no one in her household being sick. Lisa Aquino-Chapman, Elie’s mom, said prior to this episode, Elie had had issues with throwing up and would sometimes get really grumpy or grouchy. Aquino-Chapman said she thought this behavior was exhibited because Elie needed a snack. However, it was more than that.

Elie was taken to the UF Health Shands Pediatric Emergency Room, where she suffered a seizure. The visit led doctors to discover her blood sugar was too low at 42 mg/dL. The target blood sugar range for a 6-year-old is between 80 to 140 mg/dL.

This hospital visit was the first of many to come in Elie’s journey to her diagnosis. Eventually, Elie and her family met with Dr. David A. Weinstein, M.D., M.M.Sc., a world-renowned specialist in GSD, who was then the director of the GSD program at UF. He was able to provide Elie with treatment for her condition.

While there are several types of GSD, Elie’s variation is untyped. Aquino-Chapman said a lot of advocacy was needed at the time to determine a diagnosis because GSD is so rare.

“She is lucky to have one of the mild types,” Aquino-Chapman said. “Kids that really have severe types need G-tubes that need to have constant food going into them.”

Elie didn’t let the diagnosis hold her back.

In second grade, she began to play volleyball; her interest in the sport sparked after she watched her older sister Emily play in high school.

“I kind of grew into the game,” Elie said.

Playing volleyball with GSD has its limits. Elie said she can’t outdo herself without lowering her blood sugar. For example, she said if she plays an entire volleyball match without being subbed out, she will get tired and start cramping in her stomach.

As a parent and a nurse, Aquino-Chapman said she attends every volleyball match, practice or tournament Elie plays in. She said she can tell when Elie isn’t feeling well on the court if her activity decreases, she’s holding her stomach, sweating profusely or looks pale.

Sometimes, Elie will go to her mom when she isn’t feeling well, and the two check Elie’s blood sugar and ketone levels by pricking Elie’s finger.

“I’m not going anywhere,” Aquino-Chapman said. “I feel like it’s my job to advocate for her.”

A few years after her diagnosis, when Elie was still in elementary school, she and her family joined the yearlong fundraising efforts of UF’s Dance Marathon. Aquino-Chapman said Dance Marathon allows her family to tell Elie’s story while educating others on the rare condition.

“We love the support that we get from them because kids with medical conditions understand each other,” Aquino-Chapman said.

Smith said her team painted pumpkins with Elie and her family in October 2021. She said meetings like this allowed the public relations team to form a closer bond with Elie.

Each person involved in Dance Marathon has a different story or reason for their involvement. What’s really neat is seeing everyone come together for the same overall mission, Smith said.

“The direct impact that we’re making within our community is really so incredible,” she said.

“You get to create these miracles and help out these other kids like me,” Elie said.

“Just seeing the impact that we have had on her life but also the reciprocal impact she has had on ours is just incredible,” Smith said.

Aquino-Chapman said she’s better prepared as a result of Elie’s diagnosis. She now always tries to plan ahead by packing extra food and drinks along with Elie’s glucose meters, ketone meters and nausea medication.

After everything, Elie strives to be a regular kid, Aquino-Chapman said.

When she was younger, Elie said Dance Marathon helped her realize she wasn’t alone in being different. She said her time with Dance Marathon has allowed her to make many lifelong friends.

“I used to wonder how it would be like to not have a condition or just be normal like some of my friends,” Elie said. “But Dance Marathon made me realize…you are unique, and that’s a great thing.”

Kaitlyn is a reporter for WUFT News who can be reached by calling 352-392-6397 or emailing news@wuft.org.
Previous Alachua County Public Schools update school security protocols
Next High Springs receives $3 million in relief money