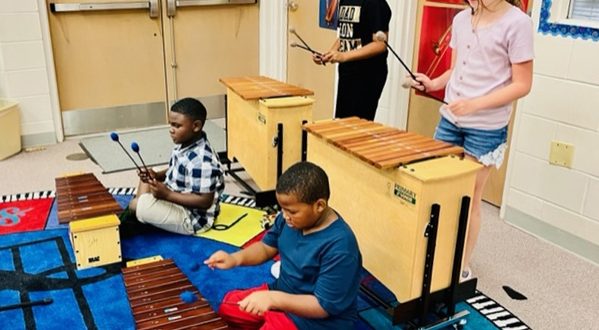 “Ninety-nine percent of educators in America cannot think, you know what, this would be academically best for the learning of my kids, and then put it on a list and have it bought,” she said. “Nobody has that happen.”

Edwards, who has taught music at Fort McCoy Elementary northeast of Ocala, Florida, for seven years, is one of the few music teachers in Florida participating in a $400,000 state-funded early childhood music education program.

The program launched in 2017 and was initially set to expire in June 2020. After extending into this school year because of COVID-19 restrictions, the pilot program will receive another extension and continue next year.

Through the program, kindergarteners through second graders in 10 participating schools in Alachua, Marion and Miami-Dade counties receive music instruction for at least 30 consecutive minutes twice a week.

Richard Corcoran, the commissioner of education, selected school districts based on the school district’s proximity to the University of Florida and what was described as needs-based criteria established by the State Board of Education.

The program is possible through a bill that passed unanimously through the House and Senate. Gov. Ron DeSantis was expected to sign the latest appropriation.

“We’re in need of a 12-month extension to finish our pilot program to prove the premise that early childhood, being exposed to music, enhances their learning skills all across the board,” Rep. Chuck Clemons, R-Jonesville, said during the House education committee vote last month.

Sen. Keith Perry, R-Gainesville, sponsored a companion bill. He said about 10 years ago he heard a presentation on music and childhood development, which fueled his desire to dig deeper into the data and conduct his own research.

“We’ve seen just this lack of investment in music and arts,” he said.

Perry said the $400,000 funding portion of the program kept getting vetoed until the school year that began in 2020.

“I had to keep fighting,” he said. “It was like Groundhog Day, it never ends.”

Perry said exposure to music education can help with memory retention, concentration and IQ, and it should be considered part of the entire educational experience in the same way as math or English.

“With all the competing interests for funding in Tallahassee, I wanted to have a study done so I can show my colleagues my goal is to have this implemented statewide,” he said.

Classroom observations and open-ended surveys will be used to gauge the program’s value, said Anne Seraphine, an assistant clinical professor in the research and evaluation methods section of UF’s College of Education.

Official study data is not yet available, but progress is already being made.

Teachers in the participating schools can now purchase instruments and curriculum materials they otherwise would not have received money for, and the students are benefiting because of it, said Diana Rollo, the Alachua County Public Schools curriculum specialist who manages the program for the district.

The twice-a-week requirement is also helping students learn because most music teachers only see each class once a week.

“Our kids, they’re having better recall,” she said. “The teachers are really starting to see that the kids are making connections from one class to the next.”

Despite the delay in approved funding for the pilot program, Rollo said music and the arts foster life skills that include critical thinking, discipline and listening, especially as schools emerge out of the COVID-19 pandemic.

“The arts are a vital piece for social, emotional learning,” she said. “Now we’re starting to see that the kids need that creative self-expression, that outlet for their creativity.”

Edwards said now her students are receiving instruction for an especially appropriate time.

“It’s just the right amount of time for their attention span at that age,” she said.

This story was produced by Fresh Take Florida, a news service of the University of Florida College of Journalism and Communications. The reporter can be reached at ahasebroock@freshtakeflorida.com.