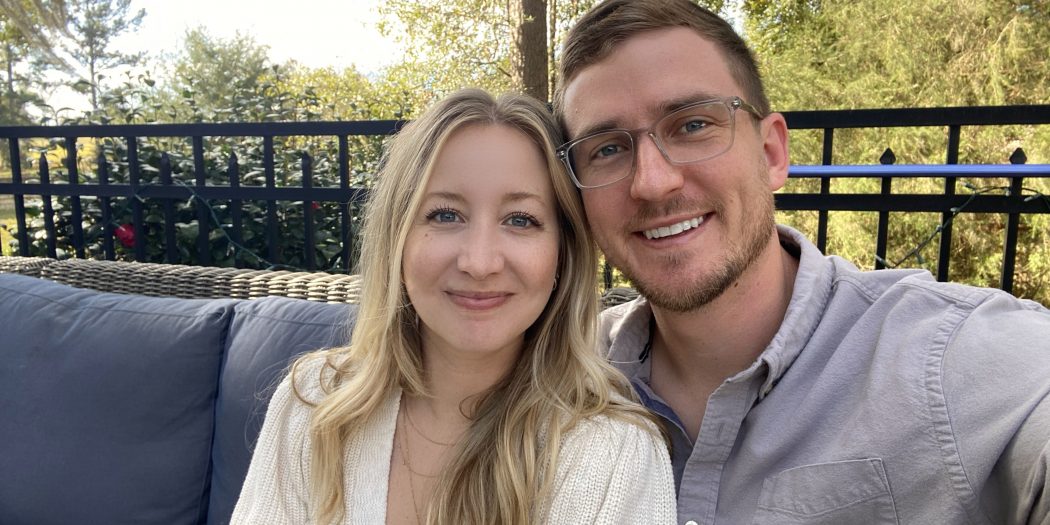 Baileigh Johnson and her husband, Chris Fahey, had been married for one year when they had an unexpected pregnancy. (Photo courtesy of Johnson)

Editor’s note: Please note that this story includes the mention of suicide. If you or someone you know is suicidal, you can reach the national suicide hotline at 1-800-273-8255.

Baileigh Johnson’s Southern Baptist faith has been a core pillar throughout her life.

From age 2 onward, she attended Sunday church services with her family. She went to a private Christian school until 10th grade and served as a youth group leader between the ages of 14 and 18.

The church was her home as much as her actual home was.

But at the age of 29, she made a decision some consider a complete renunciation of one’s faith: She got an abortion.

Johnson’s immense connection to her faith, and the reality of such a decision, put a strain on her beliefs. She had grown up in a household that believed in the right to life, a view which she was now having to contradict.

But the news of her unexpected pregnancy almost one year into her marriage to her husband, with whom she’d been together for 10 years, came soon after her diagnosis of major depressive disorder.

Ultimately, Johnson said the right choice for her was to terminate her pregnancy.

Even with the support of her family, access to the proper resources and a sense of security in her decision, Johnson was not able to get an abortion until she was six weeks and a day pregnant.

Her actions could be considered illegal in Texas, where a new law bans abortions performed after six weeks, when a physician can detect a fetal heartbeat.

On Sept. 1, Texas’ Senate Bill 8 took effect, prohibiting abortions within a time frame where many women are not yet able to determine whether they are pregnant.

Now, other states are proposing similar bills, with Florida being one of the latest states to enact restrictive bans on abortion.

On March 3, Florida legislators voted to ban most abortions after 15 weeks of pregnancy.

These restrictive bans are currently unconstitutional under Roe v. Wade, the U.S. Supreme Court case that legalized abortion in 1973. But a case from Mississippi has now reached the Supreme Court, with the state also seeking a ban on abortions after 15 weeks. The suit involves Jackson Women’s Health Organization, the only remaining abortion clinic in the state.

With the appointment of three right-leaning Supreme Court justices under former President Donald Trump, a ruling in favor of the Mississippi law is likely. Such a decision would enable states to determine the legality of abortion and abolish the current standard set forth by Roe v. Wade.

Created Equal, a national anti-abortion group, expressed its support for the Florida legislation during a visit to the University of Florida campus in early March. The organization, led by Mark Harrington, uses a traveling photo exhibit on campuses to show what abortion does to unborn children.

“It’s been a long fight,” Harrington said. “I mean, for 49 years now we’ve been attempting to overthrow Roe v. Wade, and it looks like we might be on the way to doing that.”

Abortion activists are fearful as a new reality sets in.

Barbara DeVane has lobbied Florida’s legislature in Tallahassee for almost 50 years. DeVane is now 79, and can no longer get pregnant, but her desire to guarantee reproductive rights for women has never wavered.

“I’ll never need an abortion,” she said. “But I will go to my death trying to protect other women’s right to choose.”

DeVane said any regulation, no matter its length, is an infringement on a woman’s right to choose.

She calls the leaders in office hypocritical. Gov. Ron DeSantis, she said, issues statements calling mask mandates and COVID-19 vaccination requirements an infringement on people’s rights to their bodies, but the same does not apply to women’s reproductive rights.

“Never in 50 years have I ever seen a bill filed that would restrict a man’s reproductive freedom,” DeVane said. “It’s only about women.”

Amy Weintraub said abortion is being used as a political pawn.

“It is apparently an easy game piece for elected officials to use,” Weintraub said. “Many of these leaders don’t necessarily really care that much about reproductive health or reproductive rights, but they see that it’s a way that they can charge up a certain segment of their base.”

She said attempts to strike down Roe v. Wade are not a novelty for abortion rights activists. Anti-abortion state politicians have passed more than 550 abortion restrictions since 2010, but Weintraub said the Mississippi case presents the most significant threat to Roe since its inception.

If the bans pass, they will make access increasingly more difficult and force many to travel to states where it is legal to get the care they need, she said.

Approximately 26 U.S. states are predicted to implement restrictive abortion laws if Roe is overturned. The Guttmacher Institute, an abortion-rights research organization, recently compiled data to illustrate how far people seeking an abortion in any of the 26 states would have to travel to get one.

According to the interactive map, without the ban, people in Florida can travel an average of 13 miles to get an abortion. But if a 15-week ban were to be implemented, about 4.6 million women of reproductive age would have to drive approximately 583 miles to North Carolina, when seeking an abortion after 15 weeks.

Laura Goodhue is the executive director of the Florida Alliance of Planned Parenthood Affiliates. Goodhue said the Supreme Court’s refusal to block the Texas law when it went into effect in September puts abortion further into question.

“It’s not surprising that other states are taking this up,” Goodhue said. “But what’s scary is that the courts aren’t stopping it.”

Young people in particular, she said, have never seen a version of America where abortion rights are restricted.

People under the age of 18, for instance, face immense obstacles to getting abortions, she said. They require a parent or judge’s permission and many don’t notice the signs of pregnancy before six weeks. Goodhue said forcing a minor to give birth against her will is far more dangerous than a medical abortion.

But Alexa Lane said people have a skewed view of the circumstances that would require someone to get an abortion. Lane works at Presidential Women’s Center, an independent abortion provider in West Palm Beach.

“It doesn’t matter,” Lane said. “It doesn’t really matter — the reason and the circumstances —  what matters is that they have autonomy over their own body.”

Although abortion was not legalized until 1973, women still found alternative methods to obtain an abortion. Before the passing of Roe, approximately 200 women died per year while seeking abortions, according to NPR. Some resorted to ingesting poisons, using instruments like coat hangers or purposefully falling down the stairs to terminate their pregnancy.

Lane said making abortions illegal will not make them go away. Women will still attempt to get one, but access to safe methods will effectively cease.

“I hope that wake-up calls don’t have to come from women dying,” Lane said. “I hope that people realize that when women can’t have access to safe abortions, that there’s going to be people showing up at hospitals just like there was before.”

Without the proper access to resources, a situation resembling Baileigh Johnson’s would likely result in a much more dire outcome.

Even without restrictive laws in place, women across the U.S. already struggle to obtain proper abortion care. Now, with the existence of Roe v. Wade in question, Johnson considers how her personal choice could have been stripped from her had she faced it two years later.

She said she recognizes how factors such as her income, ability to travel and family circumstances granted her the privilege to get an abortion. Not all women are as fortunate.

“I’m thinking of somebody in particular who’s in a situation like mine, they’re suicidal and pregnant,” Johnson said. “I do think we’re going to see, unfortunately, some women will kill themselves.”

Johnson’s mental health served as a catalyst for her decision, as she had recently been diagnosed with major depressive disorder. Struggles with mental health have plagued Johnson’s family for generations.

“One, that I need help,” Johnson said. “And two, that this can’t be me too. This can’t be something that just continues in our family and gets passed down like this. This can’t be the trend.”

She began to meet with a team of doctors who suggested different treatment options, some of which included high doses of prescription medication, including an antipsychotic and an SSRI.

But when she found out she was pregnant, her doctors expressed concerns for her and the baby’s health, considering the nature of her treatment.

“They told me I’d be hard-pressed to find somebody who would be supportive of that intense of a treatment plan for somebody who is pregnant,” Johnson said.

In addition to her ongoing suicidal thoughts, the hormones brought on by the pregnancy caused Johnson to experience further emotional, and even physical, distress.

But Johnson remains just as connected to her faith. She believes that in Christianity, Jesus empowered women to make their own choices.

She recalls a story in the Bible, about a woman who was outcasted for 12 years. She is deemed unclean due to a condition that causes her to bleed.

But she hears about Jesus and believes that the simple power of touching his cloak will be enough to heal her. When she does, Jesus is moved by the woman’s faith and publicly calls her “daughter.”

“She doesn’t ask for permission,” Johnson said. “She doesn’t get the opinions of others. She thinks, ‘I am worthy of living better than I’m living now.’”

Johnson encourages other women to do the same.

For over 20 years, her faith pushed anti-abortion rhetoric onto her, but she said it is easy to place judgment on others who make that decision until it involves someone in your own life. She now works alongside Planned Parenthood to share her experience.

The values taught through her faith empowered Johnson to make her own choice, one that she said does not diminish the virtue of her religion.

Nicole is a reporter for WUFT News who can be reached by calling 352-392-6397 or emailing news@wuft.org.
Previous GPD’s One Community initiative continues under new police chief
Next University of Florida launches academic center for artificial intelligence