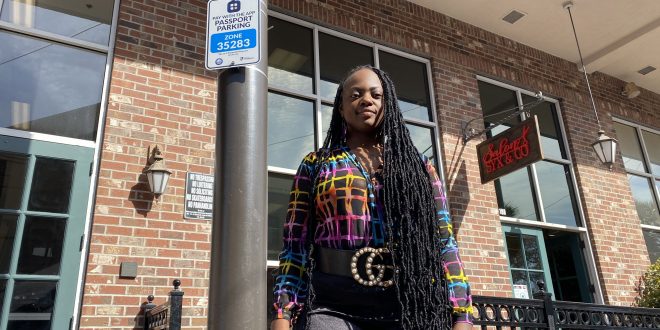 Dennayce Mavin, owner of Salon Syx, located at 201 SE 2nd Place, said she parked on the street outside her business for five minutes to unload her car and received a $34 ticket despite pleading with parking enforcement. “I didn’t make a fuss about it, I just took the ticket,” she said. “But it kind of rubbed me the wrong way.” (Nevada Cullen/WUFT News)

Dennayce Mavin parked her vehicle on the street outside her business, Salon Syx on Southeast Second Place, to unload her car Tuesday, the same day paid parking went into effect in downtown Gainesville.

Mavin, 34, of Hunters Crossing, said she was only there for five minutes, and pleaded with a parking enforcement official not to penalize her.

Instead of sympathy or remorse, she received a $34 citation.

“I didn’t make a fuss about it, I just took the ticket,” she said. “But it kind of rubbed me the wrong way.”

Mavin will not encounter the same problem anytime soon.

The Gainesville City Commission on Thursday voted 5-1 in favor of suspending the paid parking system until June 1. Rather than $1 per hour, curbside parking is available for free once again for up to two hours.

Several downtown business owners and other members of the north central Florida community spoke against paid parking at the meeting. They said they saw a dip in revenue as soon as the paid parking signs were installed last month.

Gabriel Chavez, an owner of Wyatt’s Coffee at Second Avenue, said while his shop is known for not having open seats, that pretty much stopped immediately. His employees either walked farther to get to work or were dropped off by friends or family to avoid paid parking.

In his frustration, Chavez, 25, of Hibiscus Park, took to Instagram. Through his shop’s account, he asked followers for their thoughts on the parking changes, and his Instagram story received more than 400 responses. The majority were unhappy reactions.

Chavez said he was bothered by the timing of the parking changes because businesses are still recovering from the COVID-19 pandemic and supply-chain issues.

“It just feels like a slap in the face,” he said.

City Commissioner Harvey Ward echoed Chavez’s concerns, saying the commission may have acted too quickly to install the new parking system so soon after the pandemic.

Mayor Lauren Poe voted against the rescission, citing the difficulty in finding a place to park downtown. Additionally, Poe said, Gainesville residents who can’t afford cars should not have to suffer from paying taxes that allow for free spots.

“There is no such thing as free parking,” he said. “The cost of ‘free parking’ is disproportionately shifted to our lowest-income residents.”

Margaret Rose Delisle, 26, of Micanopy, read a passionate speech defending free parking downtown at the meeting. She said part of the reason she fell in love with Gainesville was its local businesses, and she wants to see them protected.

Upon learning of the commission’s reversal, Delisle said, “It’s good that they’re taking a pause to really go back and do the work that they should have done before, and I would like to see them continue to make decisions that benefit the community the most.”

Later during the meeting, Andrew Schaer, owner of Hear Again Records, asked if the paid parking signs would be covered that day. Schaer, 45, of Libby Heights, said he had garbage bags at his store on Southeast First Street and could do it himself.

When he arrived there, however, someone had already done the job for him. By 2:30 p.m. Thursday, 14 paid parking signs on First Street, Second Avenue and Second Place were covered.

Schaer said he hopes downtown businesses can work together to discourage the commission from returning to paid parking.

“Regardless of how it’s implemented,” he said, “a paid parking (system) will be detrimental to the businesses of downtown.”

As it turns out, Donald Chisholm, 29, who works for the Gainesville Department of Mobility, started taking down the signage along Second Avenue at around 3:30 p.m.

Hughes, owner of Loosey’s on First Avenue, said it would be tough to solve the parking dilemma. Still, he said, he was relieved by the decision to postpone the paid parking system.

“It’s not an immediate fix,” said Hughes, 40, of Northwood. “It doesn’t erase the damage that’s been done. But we have a path forward that we didn’t have before.”

Nevada is a reporter for WUFT News who can be reached by calling 352-392-6397 or emailing news@wuft.org.
Previous Two train lines, one museum: Micanopy Historical Museum is on the right tracks
Next Gainesville applies for FDOT grant in hopes of getting free RTS fares for every rider