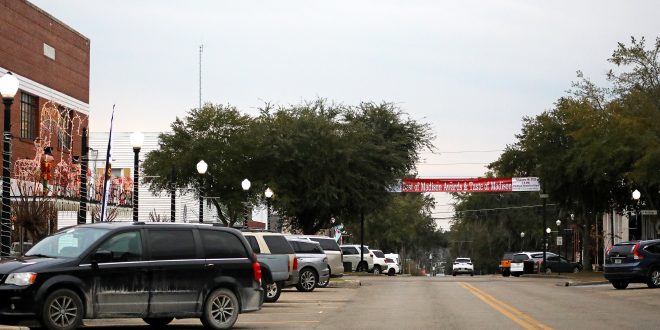 A banner hangs over Range Avenue in historic Madison, Fla. on Friday, Jan. 28, 2022. The city will be affected by redistricting in the state. (Chasity Maynard/Fresh Take Florida)

MADISON, Fla. – A small, historically Black city an hour east of Tallahassee is in the crosshairs of a controversial redistricting plan by Gov. Ron DeSantis. The plan would radically redraw the state’s 5th congressional district and could cost the Black Democrat who represents it his seat in Congress.

Madison is a rural community with a population of about 3,000 people, almost two-thirds of whom are Black. Its congressman, Al Lawson, is a Democratic former longtime state lawmaker who won his House seat in 2016 and is one of five Black members of Congress from Florida.

If DeSantis’ redistricting plan were approved, Lawson wouldn’t represent Madison anymore. He could be vulnerable to losing his next election in the new mostly Republican and white district that would be created.

Florida’s Republican-controlled Senate passed a plan different than the governor’s proposal in a rare snub of the popular leader of the GOP in the state. The House was set to vote on the issue Tuesday.

In Madison, the political jockeying and partisan battles at the Capitol can seem distant to people on the city’s quiet downtown strip. Red brick sidewalks line the streets where locals grab coffee, shop at consignment stores or stop for lunch.

Some Madison locals expressed opposition to the governor’s plan and fear losing their rapport with Lawson could cause Congress to neglect their city’s needs. Lawson lives in Tallahassee, just 60 miles west of Madison.

“When you lose that, then it’s almost like having to start all over again,” said Jerome Wyche, a 73-year-old lifelong Madison resident.

Wyche also serves as Madison’s city manager. He stressed his comments about redistricting reflect his personal views, not those of the city government.

As a Black man, Wyche said the area’s demographics should determine the district’s representation. He called for more public debate about the impact of the congressional maps before any are approved in Tallahassee.

“If you don’t have the interests of the people at heart, then people have a tendency to lose interest in how” government works, said Wyche, who praised Lawson for being available to constituents – even on his personal phone.

Florida’s 5th Congressional District — where Madison is located — spans eight counties across northern Florida, from Tallahassee to Jacksonville, and is nearly 50% Black and 10% Hispanic. Under the DeSantis proposal, the district would be erased and absorbed into a handful of newly drawn districts that are mostly white and GOP. Only one Florida congressional district is majority-Black — Florida’s 20th, near Fort Lauderdale.

Florida’s 5th is largely Democratic – 57% of registered voters, compared with 24% Republican – and Lawson won his last election in 2020 by about 30 percentage points. He blasted the governor’s plan, calling it unconstitutional and a violation of the Voting Rights Act.

“It is evident that DeSantis is trying to restrict minority representation, specifically African American voters,” Lawson said in a statement earlier this month just after DeSantis released his plan.

DeSantis’ unexpected and late intervention in mid-January in the Legislature’s effort to redraw the state’s congressional districts immediately ignited backlash. Democratic lawmakers have sharply criticized the governor’s proposal, saying it would diminish minority representation by cutting the number of heavily Black districts to two from four, including Lawson’s and one in Orlando. Critics also said the DeSantis proposal would weaken Hispanic representation.

As the Senate passed a different map, DeSantis – who is running for re-election this year and may mount a bid for the White House in 2024 – has hinted at a veto if the map approved by lawmakers doesn’t track with his.

DeSantis spokeswoman Christina Pushaw characterized the current 5th Congressional District – which would be largely preserved in a map the Florida Senate already has passed – as an unconstitutional and flagrant gerrymander. The current boundaries were approved by the Florida Supreme Court in 2015.

A few blocks off Madison’s downtown drag, Billie Margraves, 60, sat on his porch watching cars pass by going in and out of town.

As he looked over the governor’s proposed congressional map, his eyebrows rose.

“It undermines the democratic process,” Margraves said, referring to DeSantis’ proposed obliteration of the 5th district. “It doesn’t matter if you’re Democrat or Republican.”

Margraves went door to door for Democrats in the 2020 election before moving from Monroe, Michigan, to Florida almost two years ago. A union electrician for 32 years and now a small business owner, Margraves said he believes the Democratic party best serves the needs of both the labor force and entrepreneurs.

Fairly new to the area, Margraves hasn’t had the chance to vote for Lawson, but said he will if the Democrat is on the ballot again.

Not everyone in Madison approves of Lawson or would mind if the district is redrawn.

One of those voters is Cindy Poiré, the 65-year-old owner of Madison Antiques Market and Interiors in downtown Madison. She is white, has lived in the city for 20 years and has owned her store for about 16 years.

“Hell yeah!” exclaimed Poiré, an enthusiastic DeSantis supporter, as she looked at the governor’s proposal.

Poiré said revamping the district to give a Republican candidate an advantage would benefit her as a small business owner.

“Lawson’s a Democrat,” she said. “Democrats don’t look out for businesses.”

Just around the corner from her antique store, Alex Vargas enjoyed an afternoon coffee at the Sunrise Coffee Shop and Wine. The 22-year-old Madison resident and registered Democrat said he’s not usually tuned in to politics.

Glancing over the DeSantis plan, Vargas saw not only the disappearance of the 5th district – but a power grab by the governor.

“Obviously, you’re trying to do something by splitting it up,” Vargas said, who is Hispanic. “Just to keep the votes on your side, rather than keeping it actually equal.”

This story was produced by Fresh Take Florida, a news service of the University of Florida College of Journalism and Communications. The reporter can be reached at swalker@freshtakeflorida.com

@swalker_7
Previous The Point, Jan. 31, 2022: Alachua County’s 2022 Teacher of the Year is a middle school music director
Next Here’s what physicians have learned about long-term COVID-19 conditions