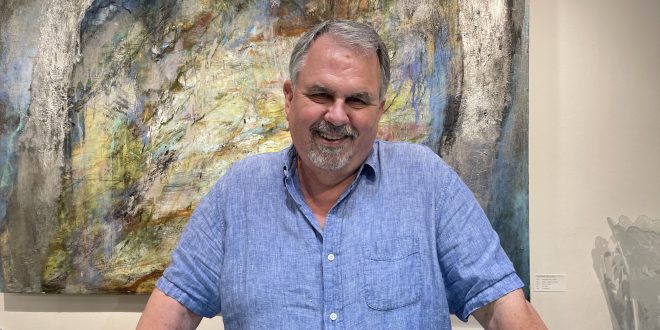 Owner of the gallery, David Arrighi, stands behind the jewelry counter. In the background is a Margaret Ross Tolbert painting of the Florida Springs, the first artist Arrighi chose to sell in his gallery. (Daniela Ghelman/WUFT News)

When David Arrighi, founding owner of the Thornebrook Gallery, graduated from the University of Florida with a bachelor of fine arts degree in 1980, he never imagined starting a project that would quickly become his career.

This October marked four decades of the beloved gallery — and also foreshadowed its closure, with Arrighi announcing that he will close in February 2023.

“The idea of closing is bittersweet,” said the 67-year-old Gainesville resident. “I don’t like the idea of leaving the void in Gainesville that my gallery fills, but it’s time.”

“I didn’t expect the gallery to be open for this long,” Arrighi said. “I just wanted to do something that I enjoyed.”

A month after Arrighi graduated, he opened the first version of the gallery. The original location was across the street from where it is currently located at 2441 NW 43rd St. Four years later, he bought the newly built units at Thornebrook Plaza.

“It doesn’t look like a shopping center; it looks like a park,” Arrighi said. “It worked very well for me because it’s just beautiful, and I liked the pastoral sound of Thornebrook.”

Arrighi said that when he was in art school doing his BFA in printmaking and specialization in photo intaglio, he discovered that artists were terrible at trying to sell their work. He wanted to inspire others by showcasing and selling nice-quality artwork.

But it was not easy at first.

“I had no money, so I asked one of my favorite persons and artists, Margaret Ross Tolbert, to give me some art to show,” Arrighi said, adding that he showcased Tolbert’s paintings of the Florida Springs.

Two years later, on a trip to North Carolina, he fell in love with the crafts in Ashville, known for its arts. He bought some crafts to sell in his gallery.

“There is a very active crafts culture in Asheville like glassmaking, ceramics, woodworking, and they have taken basket weaving to the level of art,” said Arrighi. “I was struck by the fact that an artist can take the humblest of materials and create fine art.”

A year after opening, a man entered the gallery and offered his jewelry line, which he had been making since the 1950s, Arrighi added.

One of Arrighi’s favorite things about the gallery is finding the crafts.

“Finding new work for the gallery is one of my greatest joys, whether it’s painting, crafts or even framing,” he said. “I love to introduce my clientele to levels of art that they didn’t know existed.”

Since the gallery opened its doors in 1981, Arrighi has witnessed how Gainesville has changed socially and financially.

“I like the way Gainesville has developed and still is,” said Arrighi. “The local population is getting more involved with startups and other levels of technology and education, and there’s a lot of people who work hard to do what’s good for the community.”

On the first week of September, Arrighi delivered a 48-by-60-inch piece to the new UF Herbert Wertheim Laboratory for Engineering Excellence. By Trish Beckham, it is titled “St. John’s Dock.” The piece is an oil painting on canvas, and it sold for $12,000.

“Trish was standing on the dock and was enthralled by the way the cast shadow of the dock changed the color of the water and highlighted the textures and the movement,” Arrighi said.

The gallery has also served as a base and model for other artists and galleries around Thornebrook Village. Because of the attention Arrighi drew by showcasing Tolbert’s paintings, she opened a gallery about 10 years ago close to Arrighi’s.

“I think the gallery elevates what people expect,” Arrighi said. “When they come here and see this level of artwork, it is difficult to then go to Target and pick something for your wall. It allows people to appreciate art that really means something.”

As with most businesses, the art gallery suffered losses during the pandemic—namely, the inability to have shows for a year-and-a-half. In a typical year, there are five shows.

Shows have always been a way for Arrighi to help people discover new artists and unique, affordable artwork.

“Shows bring people in,” Arrighi said. “People feel intimated by art galleries, so normally, many of them won’t even walk through the door.”

Another mainstay of the gallery is framing. Colleen Murray, the gallery’s picture framer since 1981, describes her job: “Being a framer is like working in a factory. A lot of things are repetitive. But there are fun things like textiles, old photos, fancy mats and collages.”

Murray said her favorite things to frame are collages because they tell stories. People often bring in pictures or documents to frame, or pieces of artwork.

“You can find pretty cool stuff here,” she said. “And what we want to do is present the artwork in the nicest way possible without overwhelming it.”

Arrighi and Murray called it the ‘art of frame’ because framing is so important to the finished piece. Arrighi added that you can make or break a work of art with the framing.

Murray said that picture framing is art itself, and it makes a difference to the work: selecting the right frame can transform the entire image.

“Because, what are you going to do with a box of pictures? Keep them in the box or do something with them so you can look at them?” Murray said.

As the gallery winds down, Arrighi will sell what he can, in the store, or online; the rest will be returned to the artists.

Arrighi is ready to set off on new adventures with his wife, who retired a year ago, and has already has signed them up for a Rhine River cruise in April of 2023. They are also thinking of renting an RV and heading West to take in the landscapes.

But closing the gallery is still bittersweet.

“My clients are pretty upset because there’s nothing like this place,” Arrighi said. “I will miss all the wonderful people who have been clients and friends during these 40 years.”

Daniela is a reporter for WUFT News who can be reached by calling 352-392-6397 or emailing news@wuft.org.
Previous Nikki Fried joins Alachua County leaders to discuss statewide phaseout of potentially harmful food packaging
Next The Junior League of Gainesville holds 31st Miracle on Main Street event