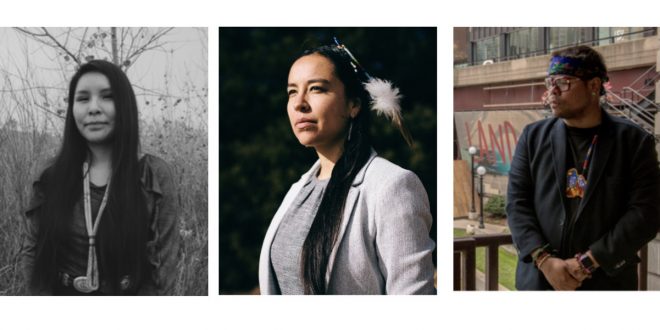 From left, Renata Yazzie, Lyla June and Sacramento Knoxx participated in a virtual event Saturday through UF's Center for the Humanities and Public Sphere.

Three Native American artists discussed what music means to them and their culture during an event, “Sites of Transformations: Songs, Native Identity and Healing,” hosted Saturday by the University of Florida’s Center for the Humanities and Public Sphere.

Sacramento Knoxx, of the Ojibwe tribe, joined Lyla June Johnston, known professionally as Lyla June, and moderator Renata Yazzie, both of the Diné (or Navajo) tribe for the virtual event.

June is a musician with songs such as “Water is Life,” which question why humans have damaged the Earth and cease to be grateful for its gifts. She is also a public speaker who focuses on Native rights and healing intergenerational and intercultural traumas.

Knoxx, of Detroit, whose music pulls from many different styles, genres and cultures, is a co-founder The Aadizookaan, a group of people who use ancestral Indigenous-based knowledge to tell stories through their various forms of art. Aadizookaan means the sacred spirit of the story.

Yazzie began the event by playing a music video of June’s song “All Nations Rise.”

Yazzie also showed part of a video for Knoxx’s song “Bwaanzhii-Niimi (Dance the War Dance).” In that video, shadows with dark and colorful effects surround the dancing artist, as he raps about his motivation to move toward success and happiness in his culture.

The following has been edited for length and clarity.

Yazzie: What are some musical and personal influences in your life?

June: For me, I don’t care what it sounds like as long as it has a message. My dad was a baby boomer and he had stacks and stacks of vinyl. I was definitely raised on all of the classic rock. I love Lauren Hill, System of a Down, EDM. I dabbled in Christian pop. Like a lot of Natives, I never really fit into one box. I’ve noticed so many Native people are multidimensional.

Yazzie: How do music and songs separately function for you?

June: I’ve tried to take a break from writing music, but I can’t. Music functions in my life as like this oxygen. I’m always writing a song in my head. To me, songs are entities of their own. If you look at old ways of Native music, nobody takes credit for them. They just exist through us and we pass them on to our kids. I feel like they are little babies I give birth to, and when they can walk on their own, I let them go. There is a prayer from the Plains Nations that says, “May I be a hollow bone.” As musicians, we are just vessels.

Knoxx: Music is just organized sound. Songs are just taking that combination of that and extending that. I feel like all of those things exist separately. When you put the turn signal on in the car, and it makes that ticking noise, in my head, it’s already a tempo. It’s like a story from the sounds that come together. They’re all my favorite. It’s like trying to pick a favorite child.

Yazzie then welcomed questions from the virtual audience.

Q: How does healing tie into your music? How does movement affect that?

June: As we all know, we carry a lot of trauma. With suffering comes the need for healing, and what I was told is, when you write or speak about your pain, you are literally getting the pain out of you. You almost purge your pain. There’s an energy with the sound waves moving out of us.

Knoxx: It’s very healing to create. I’ll play chords and it might turn into music but it’s very healing to me. It’s hard not to move with music. I feel like it’s just kind of a left-hand, right-hand thing. Vibrations and movement are like a marriage.

Q: How do you feel about other cultures using some of your culture’s practices in their own art?

Knoxx: Don’t do it. Just don’t. Unless you have certain connections to the culture or the people or some type of permission, I don’t recommend doing it.

June: I’ll have to agree. Not only can you risk appropriating, but the social climate we are in right now is very unforgiving. At the same time, some nations are very generous, but everything we share is going to be sacred, so you just have to be super careful with what you do with that.

Bailey is a reporter for WUFT News who can be reached by calling 352-392-6397 or emailing news@wuft.org.
Previous Former inmate marries imprisoned partner in unauthorized wedding in Florida
Next Students in Alachua County Public Schools can now opt-out of a mask mandate