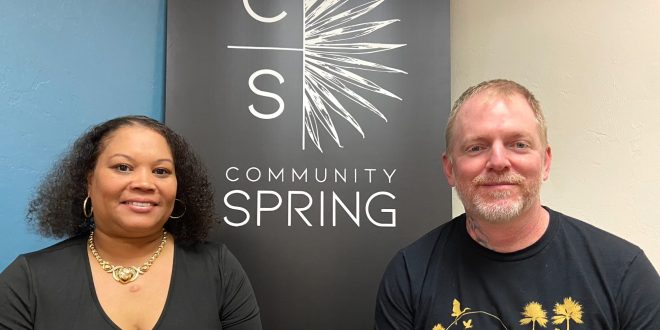 Tequila McKnight and Kevin Scott, both formerly incarcerated, are working to provide a guaranteed income to 115 Alachua County residents who were recently released from prison or jail. (Nora O'Neill/WUFT News)

When Tequila McKnight was released from a three-year stint in Florida State Prison in 2014, $7,600 that first year afterward would have been life-changing.

“I lost everything,” McKnight said of her incarceration for aggravated battery and aggravated assault. “When I came home, I had nothing.”

McKnight, who now owns a cleaning service, is participant coordinator for Just Income GNV, a pilot program offering guaranteed income – with no strings attached – to 115 Alachua County residents with a criminal record.

Those selected to participate will each receive a total of $7,600 over the course of a year.

Anyone who has been released from a state prison or county jail in Florida, or from a federal prison, or put on felony probation by a judge after May 31 is eligible to apply.

The program is a study in collaboration with the University of Pennsylvania Center for Guaranteed Income Research. The university will select the participants via a randomized lottery system. An additional 140 applicants will not receive monthly payments, but will be invited to take part in surveys and interviews to share their experiences.

“Coming out of incarceration is extraordinarily difficult,” said Scott, who himself was previously incarcerated. “The odds are very, very much against you in terms of being able to just survive.”

After the selected participants sign some initial documents and set up direct deposit, they are free to spend the money as desired with no commitment to the program.

Just Income GNV is a project of Community Spring, a Gainesville nonprofit working to, according to its website, “dismantle structural poverty” and “spur economic mobility at a grassroots level.” It is funded by Mayors for a Guaranteed Income and Spring Point Partners.

Gainesville Mayor Lauren Poe, a member of the mayors organization, said he was “really excited” that the data collected from the local and national initiatives will help to “really build a better narrative of how guaranteed income could help all people living in our country.”

“It’s important to build that body of research that shows the efficacy and the ability to implement such a program,” he said.

Guaranteed income differs from universal basic income, the concept popularized during Andrew Yang’s 2020 presidential campaign. Rather than providing money to all citizens, guaranteed income targets specific groups of people, such as those who are formerly incarcerated.

Social Security is an example of an existing guaranteed income program, Poe said.

The city of Stockton, California, has introduced a similar no-strings-attached guaranteed income program, according to The Atlantic. Researchers found that participants were able to pay off debt and take better care of their families, and that the payments did not prevent individuals from seeking work, the magazine reported.

“Basically, our system is currently setting people up for failure,” Gross said. “Programs like this pilot program are common sense, cost efficient solutions.”

They also help save communities money, she said.

According to Scott, it costs around $38,000 a year to cover the incarceration of one inmate.

“We need to invest in people,” Gross said. “That’s how we provide a legitimate second chance.”

Nora is a reporter for WUFT News who can be reached by calling 352-392-6397 or emailing news@wuft.org.
Previous Santa Fe Teaching Zoo throws its gibbons a birthday party
Next Alachua County parents can opt out of having their public school students wear masks