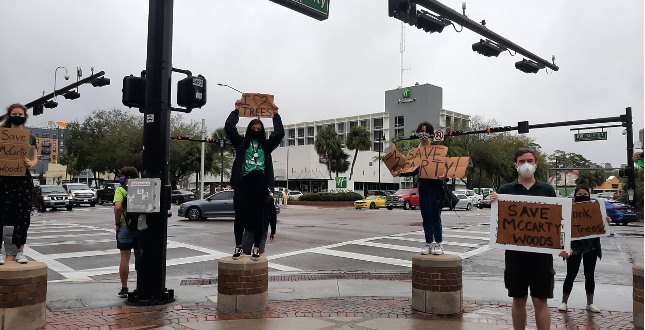 Students protested the possible development of McCarty Woods at the corner of University Avenue and 13th Street on March 2. This was one of the many events organized by the Save McCarty Woods Campaign in the span of a month. (Alexa Sauvagere/WUFT News)

The past three months consisted of heated discussion on whether a patch of woods on the east side of the University of Florida campus should serve as land for possible development.

The efforts to save the small urban forest resulted in the university on Tuesday announcing its decision to remove McCarty Woods from current consideration for development in the 2020-2030 Campus Master Plan.

UF leadership intends to provide more information regarding how the university plans to proceed on the matter, according to the statement sent by Hessy Fernandez, UF’s Director of Issue Management and Crisis Communication.

“It’s a great day for everybody, I think,” UF professor Douglas Soltis said. “I think it’s a really good sign and a good move by the administration that they recognize the impact.”

McCarty Woods holds an array of massive, unique trees, such as White Ash, Hackberry, Sweetgum, Hickory and Oak – all of which lie on the two acres previously open for development. One of the trees at the entrance off Museum Road is a colossal Sweetgum tree about a decade old; it takes several people to reach all around the trunk.

The smaller a unit of forest becomes, the more easily degraded that system gets, Soltis said. Diminishing the woods down to a single acre would make it more vulnerable to invasive species, deterioration of the microbiome, etc.

“You can applaud a lot of things about the Master Plan like more biking and more walking,” Soltis said. “But we didn’t really know about the Woods.”

Aside from the McCarty Woods controversy, the Campus Master Plan 2020-2030 also proposes completely restricting vehicles in the northeast section of campus (except for emergency vehicles), so walking and biking would serve as the primary modes of getting around. The plan also seeks to increase the amount of conservation areas by 7.3 acres, expanding upon Lake Alice and other locations. This would total 455 acres of conservation land, which makes up about 23% of the total main campus acreage.

The decision to develop on McCarty Woods came after four years of mapping out themes and goals the university envisions for the future, said UF Planning Director Linda Dixon. The university aims to create a more urban environment on the eastern third of the campus that allows for more walking and accessibility. The plan includes potential ideas for a 1,400-bed residential hall and an additional student recreation center, which would incorporate courtyards and outdoor spaces for people to enjoy.

“Our hope was that we could have these conversations before construction projects are proposed, and we could work together to think about how to enhance those conservation areas for academic uses and also just for people’s access and enjoyment,” Dixon said. “And, you know, we’re still very interested in that.”

Scauzillo notes that the campaign could not have had as much of an impact if it had not been for the people who participated in the protests and march, the people who helped spread awareness on social media and the nearly 15,000 people who signed the petition.

“We are all really happy that we’ve won the first battle,” Scauzillo said. “But we’re kind of just holding our breath and hoping people continue listening because the story is not over.”

McCarty Woods faced potential development decades ago, but faculty and students helped save the area in 1987. According to the 2000-2010 Campus Master Plan, the woods was intended for preservation because of its value as a natural classroom and an accessible laboratory.

UF leadership, however, stripped the woods of its conservation status to allow for development on the land if a project came up. The Save McCarty Woods campaign and faculty want the university to specify the meaning behind identifying land for conservation.

“If they’re going to slap that title on there, there needs to be some respect for it,” Scauzillo said. “Maybe that means protected for fifty years or whatever seems reasonable; a decade does not seem appropriate.”

Another major idea some campaign leaders have discussed is the possibility of granting conservation easement status to McCarty Woods and other conservation areas. This would protect designated areas from future developments and plan changes.

Moving forward, the campaign intends to target overall campus conservation and to advocate for areas as if they were people. Members have taken to repeating the line from the popular movie “The Lorax.”

“We speak for the trees,” they say.

Scauzillo envisions the campaign becoming less of a club because the cause is not limited to just students; faculty, alumni and community members all have a stake in what the woods means to them. You cannot quantify sentimental value or experiential value, she said.

Further down the line, potential campaign activities include routine cleanups, invasive species removal and trail maintenance. Campaign members feel the university needs to acknowledge and take responsibility for the deterioration of some of the conservation lands.

“I understand that so many great universities have this urban layout that’s very walkable, and I know that [UF wants] to reach top 5,” Scauzillo said. “But maybe that’s not who UF is. We have to embrace that legacy and admit that there are places that we can improve, but we’re going to stay the same because that is what the students love.”

Alexa is a reporter for WUFT News who can be reached by calling 352-392-6397 or emailing news@wuft.org.
Previous The Point, March 17, 2021: Florida’s Ban On Texting And Driving Is — So Far — Seldom Enforced
Next Activist Groups Request Hearing Over Ginnie Springs Water Pumping Permit