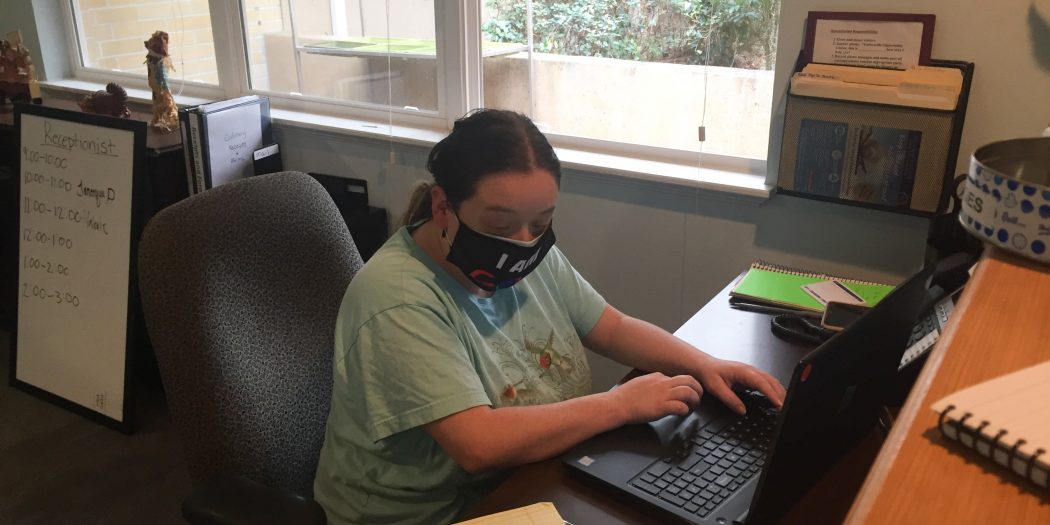 Member Valerie Sanders sits at the front desk at the Gainesville Opportunity Center, working on the newsletter, on Friday. (Rajel Wolcoff/WUFT News)

Sitting at the front desk of the Gainesville Opportunity Center, answering calls and smiling beneath her mask, Valerie Sanders is no ordinary receptionist. The 34-year-old Louisiana native is one of 75 people who have come to the center to rebuild their lives.

“I feel like I have a purpose now,” Sanders said.

The Gainesville Opportunity Center focuses on helping adults with severe mental illness. They are known there as members – and are preparing to more readily reenter the workforce.

The center has been around since 2007, but last week it held a ribbon cutting ceremony to celebrate its new facility on Northwest 14th Avenue. After renting space on Northeast 10th Avenue, funding increases enabled it to buy its own 3,038-square-foot facility.

The center is one of 13 mental health clubhouses in Florida, utilizing a “recovery through work” model which gives members jobs within the facility to help them build skills and confidence.

It’s now a haven for members such as James McCook, 47, of Trenton. He works there wherever he is needed, such as in the kitchen preparing lunch or the dining area helping to clean.

“It gives me something to do,” McCook said. “Gets me out of the house.”

Susan Thomas, 37, a native of Michigan, was a client of another local organization before workers there recommended she visit the Gainesville Opportunity Center. Before, Thomas was often depressed and struggled to find the motivation to do things. Now, she assists with anything from meal prepping to writing newsletters for the organization.

“I’m not as shy as I was before,” Thomas said. “The GOC has given me a sense of confidence knowing that I can do things and I’m helping.”

The organization also assists its members in finding jobs in the community.

John Henry Smith, 40, of Gainesville, said the program helped him get hired at Culver’s as well as get into classes at Santa Fe College. Calling his experiences a “rollercoaster,” he’s no longer at the fast food restaurant but continues to come to the center to develop more skills.

Smith said he feels prepared to not only get a job again, but to keep it.

Smith also said the organization has helped him deal with his schizophrenia and has given him a support system following the death of his mother in 2017.

“They’ve been like a family to me,” he said.

Kyana Williams, 27, of Gainesville, is another member of that family.

Williams said the program has helped her not only further her education, but also to better look for a job and a place to live on her own, and to make new friends.

“They helped me be independent,” she said.

The facility also allows for more distancing between members to help curb the spread of COVID-19. It sees about 15 members each day, but hopes that once the pandemic is over, and distancing is no longer a concern, they will be able to serve more members daily.

“Our members make lunch for about 20 people a day,” Buell said. “But once the COVID stuff’s over, we’re going to be able to have more people.”

COVID-19 has had effects beyond limiting the number of people the center can serve. According to the Centers for Disease Control and Prevention, about 40% of adults reported struggling with mental health issues or substance abuse in a survey conducted in June.

Karen McKay, 40, of Gainesville, said the local center’s program has motivated her to leave her home more often and to surround herself with like-minded people.

“I actually get out of bed to go somewhere now,” McKay said.

The organization has also helped her plan for the future. The center sells crafts made by its members on Etsy, and McKay hopes to one day open her own shop.

“It’s not intended as a therapy, but I think it is therapeutic,” she said.

Rajel is a reporter for WUFT News who can be reached by calling 352-392-6397 or emailing news@wuft.org.
Previous Gainesville LGBTQ Advocacy Groups Hold Transgender Day Of Remembrance Vigil
Next The Point, Nov. 23, 2020: Gainesville Groups Remember Transgender People Who Were Killed Last Year