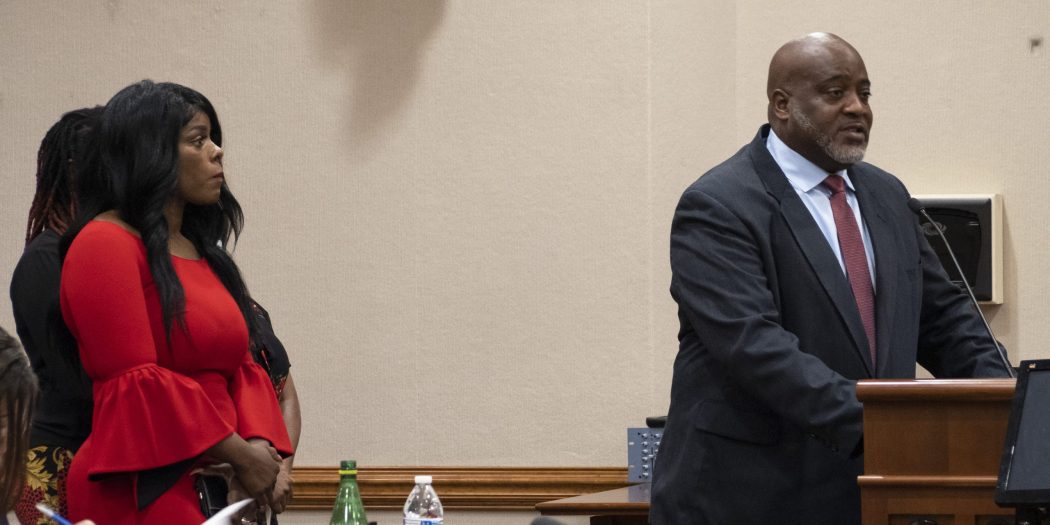 TALLAHASSEE – Vickie Devine stabbed her ex-husband in the hand in 1991. They married when she was just 15 years old, thinking it was the right decision after she became pregnant. Four years later, a domestic dispute turned violent and landed the young mother and wife in jail.

Now, nearly two decades later, Devine was seeking a full pardon from Gov. Ron DeSantis and the Board of Executive Clemency. She was one of 82 felons on this week’s agenda. Wednesday’s clemency board meeting represented the first this year, and the first since a federal appeals court ruled earlier this month – in a major legal victory for Republicans – that only felons who have already paid all fines, fees and restitution will be allowed to vote.

Ahead of November’s elections, the clemency hearing was the only way for Florida’s estimated 1 million felons to qualify to vote if they can’t afford to pay their debts or can’t find anyone else to pay for them.

In Florida – where President Donald Trump and Vice President Joe Biden are running closely – hundreds of thousands of newly registered voters could tilt the outcome, and the presidency.

At this week’s hearing, no one with a felony record and unpaid court fees would be granted the right to vote in November. Some who acknowledged owing money were told to pay their bills before their pardons would kick in. In previous years, the board restored the voting rights of some felons despite unpaid bills.

Not this year, in this political climate.

Devine, 47, of Altamonte Springs doesn’t know whether or when her civil rights will be fully restored. The governor put her case under advisement, effectively delaying a decision. With a deadline to register to vote Oct. 5, the self-described Democrat said she doesn’t know whether she can vote in November.

Devine said in an interview she doesn’t owe any court fines or fees, and the clemency board did not discuss her debts at the hearing – signs she should be able to vote lawfully even under the new court ruling. But circuit court records in Seminole County, north of Orlando, show she still owes $147.61 since at least 1996, muddying her status.

Devine registered to vote in Florida in June 2006, and voted in elections in 2008, 2010, 2012, 2014 and 2016 – all before a constitutional amendment automatically restored voting rights to felons, according to Division of Elections data. She said in an interview that after she voted in 2012, Florida warned her she had voted illegally and she was afraid to vote again. Her statement about not voting after 2012 could not be immediately reconciled with state records showing her regularly voting since then.

Most ex-criminals pardoned and placed under advisement said they previously had voting rights restored from clemency hearings or under the 2016 constitutional amendment. They were seeking the right to serve on juries, work in law enforcement or legal services, or own firearms.

Ahead of this week’s hearing, only 24 former felons have been re-enfranchised via clemency under the DeSantis administration, according to Nikki Fried, the state’s top elected Democrat as Agriculture secretary and a member of the clemency board. She said 234,000 felons regained their voting rights under the previous three governors.

Fried said 600 more voters – about as many as the margin of victory for George W. Bush in Florida in the 2000 election – could win back their civil rights, as she and Chief Financial Officer Jimmy Patronis, also on the board, have already voted yes for them.

Fried, who is expected to run against DeSantis in 2022, criticized the clemency process and the recent U.S. appeals court ruling.

“Our Legislature and executive branch have thrown up every single roadblock that they can to stop our citizens with prior felonies from voting,” Fried said. “Quite frankly, the decision is an extremely large setback. But we can’t allow ourselves to be set back.”

The governor’s office did not respond to phone messages or emails asking about Fried’s criticisms.

Dwayne Lamar Wooten, 57, from Volusia County, which includes Daytona Beach, was pardoned at the hearing. Wooten was convicted of cocaine possession, aggravated assault with a deadly weapon, burglary and shooting into a dwelling or vehicle in the 1980s and ‘90s. Now a Democrat, the ex-convict said he registered to vote in February and cast his first ballot in over 20 years during Florida’s presidential primary.

“It feels wonderful,” Wooten said. “I’ve been disenfranchised for so long. I just try to be a beacon of light to others who was in the same situation as me. You’ve got to be adamant about it. You have to fight.”

The clemency hearing took place as a new political charge echoed across Florida: Rep. Matt Gaetz, R-Fla., one of Trump’s most reliable allies, said late Tuesday he will urge Florida Attorney General Ashley Moody, also a Republican, to investigate efforts by Democrat billionaire Michael Bloomberg to pay fines and fees for felons in the state.

Moody asked the FBI and Florida Department of Law Enforcement to Investigate what she described as potential violations of election laws. Bloomberg has raised $16 million to pay felons’ court fees so they can vote in November.

Patronis said after the clemency hearing he was submitting an inquiry to the Florida Elections Commission, which enforces campaign laws in the state, to look into the billionaire’s donations.

Bribery and vote buying are felonies in Florida, but offers by Bloomberg and others do not require recipients to vote against or for any particular candidate.

A civil rights group, the Florida Rights Restoration Coalition, is working with Bloomberg and other celebrities like John Legend and Lebron James to raise funds to pay overdue fees for felons who owe less than $1,500 so they can vote in November. The group is run by Desmond Meade and Neil Volz, both felons. Meade was convicted of aggravated battery, cocaine and weapons charges. Volz was convicted in a congressional corruption scandal.

“Truth is, a year ago, there were a couple hundred thousand people going to bed at night thinking they’d be eligible to vote. And then two weeks ago, they found out they couldn’t,” Volz said. “The quicker somebody is able to rejoin the community, the less likely they are to reoffend. And we all benefit.”

The clemency board pardoned Volz, but Meade’s case was taken under advisement, meaning DeSantis will either deny or approve him at a later time. Fried asked for a speedy decision.

“These two individuals are the example of what people should be doing to turn the page of their past and get back to society,” Fried said. “I believe it was time for them to get their time in front of the Clemency Board.”

The next clemency hearing is scheduled Dec. 9 in Tallahassee, a month after the elections.

This story was produced by Fresh Take Florida, a news service of the University of Florida College of Journalism and Communications. The reporter can be reached at divanov@freshtakeflorida.com

Danielle is a reporter for WUFT News who can be reached by emailing news@wuft.org or calling 352-392-6397.
Previous The Point, Sept. 24, 2020: Why Medical Students Brought Free COVID-19 Testing To Gainesville’s SWAG Neighborhoods
Next Williston Prayer Vigil Calls For Citywide Unity Amid Racial Tensions