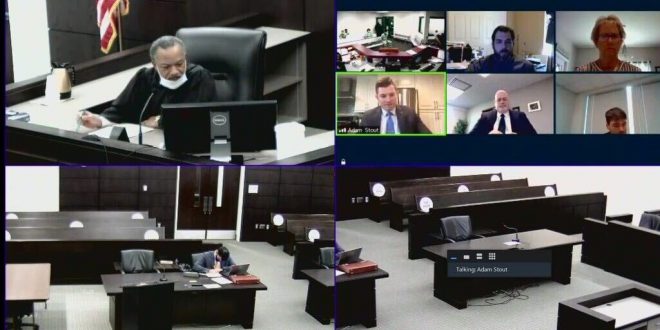 The former guard accused of attacking an Alachua County Jail inmate and obstructing justice will have to wait until November to change his plea.

Jerome Ulrich reached an agreement with the State Attorney’s Office for the Eighth Judicial Circuit. It could drop his obstructing justice charge — a third-degree felony — in exchange for a guilty plea on his battery charge — a first-degree misdemeanor — said Adam Stout, Ulrich’s attorney.

However, Eighth Circuit Judge Walter Green delayed Ulrich’s request to change his plea Monday morning during a Zoom conference because the victim, Joseph Combs, was not present during the meeting.

“I don’t feel comfortable taking an open plea without hearing from the victim,” Green said.

According to an Alachua County Sheriff’s Office arrest report, Ulrich allegedly entered Combs’ cell, struck him in the face, neck and torso and shoved him across the cell where he hit his head on a hard surface on April 28. About two hours later, Ulrich allegedly returned to Combs’ cell and told him that if he reported the beating, it would happen again.

Combs was later diagnosed with a concussion by a jail nurse practitioner. A part of the incident was caught on video by jail surveillance cameras. Ulrich was fired June 8.

Ulrich did not have a plea deal, but instead had a verbal agreement to drop the felony obstruction charge in exchange for a guilty plea, Ulrich’s attorney, Stout said. In an open plea, a defendant pleads guilty while sentencing is left to the discretion of the court.

Combs was not in attendance Monday because the sentencing hearing will not be held until November, Stout said. In a sentencing hearing, a defendant who pleads guilty or is convicted receives sentencing, including prison time or community service. During sentencing hearings, victims may speak about the impact of a crime on their lives.

The court could hold the change of plea and the sentencing on the same day in November, Green said. He also tasked Stout with arranging the next appearance with the court clerk.

The date of the new hearing was not decided Monday, but Stout told the judge he would request a day between Nov. 9 and Nov. 16.

Tristan is a reporter for WUFT News who can be reached by emailing news@wuft.org.
Previous Alachua County School District Scrambles To Provide Digital Assistance
Next Sep. 14, 2020: Afternoon News In 90