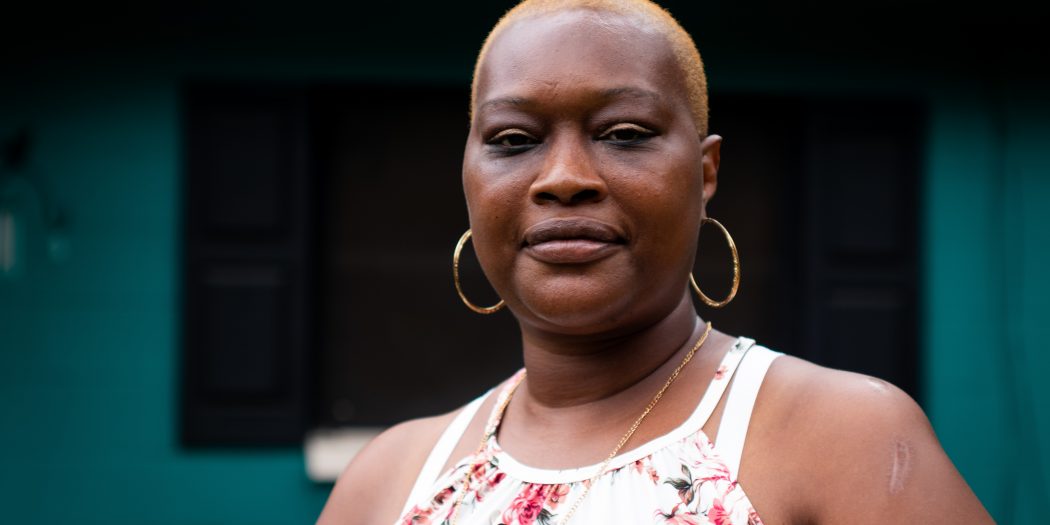 Editor’s note: This story contains profanity and descriptions of violence.

In the midst of three months of nationwide civil unrest over criminal justice reform and other racial inequities, the Alachua County Jail has become a focus of local activists frustrated with inmate treatment.

As recently as this past month, groups of protesters have gathered outside the jail near Gainesville’s northeast city limits to allege a lack of protection for inmates against COVID-19 infections. The conversations also devolve into a broader criticism of how the jail’s inmates are treated and Sheriff Sadie Darnell’s response.

For one of the protesters who has become actively involved in the past three months, it’s personal.

Jennifer Mccray Littles spends her days awaiting progress in two criminal cases. One is against former jail detention officer Jerome Ulrich for charges of battery and tampering with a victim.

That victim is her son, Joseph Combs, who has been in the jail since October on charges of attempted murder, sexual battery, aggravated battery and kidnapping.

The situation is complex, but Mccray Littles has settled on this moral calculus:

A month between incident and arrest

On April 28, Alachua County Jail surveillance video showed Ulrich entering Combs’ cell and pushing Combs against the wall. The surveillance view is then obstructed by another detention officer.

According to the police report, Ulrich returned to Combs’ cell almost two hours later. In the interview, Combs said Ulrich came back to tell him to take his plea deal in court, then threatened to batter Combs again if he reported the incident.

In his notes on the interview, investigating officer Sgt. Richard Howell said Combs was hesitant to be alone with Howell and another officer, describing him as visibly scared.

Two other inmates in nearby cells, Kenneth Sherman and Ahmod Hutchinson, were interviewed as witnesses to the incident. In their statements, both inmates said they heard Ulrich enter Combs’ cell, as well as sounds from the ensuing altercation. Sherman said in a letter he could hear Combs moaning in pain; however, none of the officers on shift called medical services.

Mccray Little said another inmate also heard Combs’ pleas, so that inmate called his own mother and urged her to get in touch with Combs’ family. Through this inmate’s mother, Mccray Littles found out about the incident.

“I started immediately calling Sadie Darnell, calling the jail trying to figure out what was going on,” Mccray Littles said, but she said the sheriff would not speak to her directly, and no one would return calls when she left voicemails.

Below: Mccray Littles speaks of her frustration trying to get answers and justice for her son.

Mccray Littles said it wasn’t until she reported the incident to Alachua County Crime Stoppers a week later that a detective contacted her and said the Alachua County Sheriff’s Office was looking into pressing charges against the detention officer.

“Absolutely nothing was done for days, and it is hurting,” Mccray Littles said. “There was no immediate action taken the night that it happened, nor was it taken the next day. It was days later, when I began to call and demand answers.”

Correspondence between investigating officers and Darnell obtained by public record request show Combs was not able to file a grievance form until April 29, a day after the incident. One month later, on May 29, the arrest report for Jerome Ulrich was filed. Ulrich made his first appearance and posted bail within 24 hours.

Until his arrest, Ulrich was on administrative suspension with pay, despite what the sheriff’s office called insubordinance for his refusal to cooperate with its investigation.

In the days after Ulrich’s arrest, Darnell issued a press release noting that Ulrich is the third detention officer at the jail to be fired for battery against an inmate since November. Of the three, two including Ulrich faced criminal charges.

Darnell also wanted to “address recent inaccurate allegations on social media of inmate abuse at the Alachua County Department of the Jail.”

“I have a zero-tolerance policy for anyone in my agency battering an inmate,” Darnell wrote.

In mid-June, Darnell joined a virtual Gainesville City Commission meeting to detail the process for handling inmate battery. She explained how administrative investigations and criminal investigations are conducted separately.

Darnell was first elected in 2006, has won reelection three times, and is on the ballot again in August. She faces a challenge from state Rep. Clovis Watson, who has outraised and outspent her with less than a month to go to the primary.

Sgt. Frank Kinsey, a public information officer for her office, said detention officers have mandated service training four times a year to review policies related to the care, control and custody of inmates. These training sessions are given in eight-hour blocks.

Ulrich was fired on June 8.

“We don’t need them in the organization,” Kinsey said in reference to officers that break policy. “They’re corrosive and toxic to the rest of the staff that is working there and doing a good job.”

In its investigation of the incident, the sheriff’s office listed two other detention officers as witnesses who were on shift with Ulrich: 56-year-old Dean Welton and 31-year-old Matthew Gould.

In a police interview, Combs said Welton came and watched from the doorway.

Surveillance video footage corroborates Welton walking up halfway through the incident and standing in the cell doorway until Ulrich exits the cell, in effect blocking the surveillance view.

An investigating officer interviewed Welton days later and showed him the surveillance footage of the incident. After replaying a clip in which it appears Ulrich is shoving Combs across the room and into a bunk bed, the investigating officer asks Welton if that action would be considered a use of force. Welton responded that he did not see the action as a use of force.

Combs also said Gould, the other officer on shift, walked by later in the night and denied him medical attention.

Two other inmates verified Combs’ story during the administrative investigation.

Welton was investigated and ultimately fired on July 24th for his involvement in the case. An investigation cleared Gould, and he still works at the jail as a detention officer.

Ulrich: ‘I wasn’t in my right mind’

As for Ulrich, he pleaded not guilty in the criminal case against him, which remains open and awaiting trial.

“I wasn’t in my right mind that day and something happened that shouldn’t have happened,” Ulrich said in his only interview with sheriff’s office investigators before getting a lawyer.

The offense report also said Ulrich was under a lot of pressure the day of the incident due to personal issues. In an email, Ulrich’s attorney Adam Stout said he is unable to comment on his client or the case due to the seriousness of the charges.

“I didn’t think Ulrich was like that,” Combs said.

Combs told investigators that he has had issues with other detention officers on that shift trying to provoke him, but never Ulrich.

During ASO’s administrative investigation though, Gould said there were rumors around how Ulrich handled himself in a cell.

Richard Howell, an investigating officer, wrote in his report that Gould said “Ulrich was quick to use force on inmates” and “had the opinion that inmates were ‘pieces of s***.’”

In the wake of the incident, Mccray Littles received an outpouring of support ranging from family and friends to social activists and strangers on Facebook.

Among these photos, she writes her own posts asking the community to contact the sheriff’s office about the treatment of her son, one ending with a hashtag that reads like a plea: “#HISLIFEMATTERS.”

By July 21, that post had been shared over 400 times. Not all those who respond on Facebook are supportive of her efforts, however. Some comments cite the reason Combs is incarcerated as justification for the assault.

In the days following Combs’ initial arrest, his case received attention from both local news outlets and international media for the allegation that he sexually assaulted and battered his pregnant girlfriend.

Defense lawyers are currently taking depositions, and as with Ulrich’s case, a criminal trial has not yet been scheduled.

Mccray Littles waits and stands by her son’s right to a fair trial.

“Do I uphold what Joseph did to get into jail? No, not at all,” she said. “Just as hard as I stood behind my daughter-in-law when Joseph did this to her, I’m standing behind Joe. Just as much.”

Sara is a reporter for WUFT News who can be reached by calling 352-392-6397 or emailing news@wuft.org.
Previous Photo Essay: For The Love Of Goats
Next The Point, Aug. 4, 2020: ‘We Thought She Was On The Upturn’: Florida Mom Fights For Her Life At UF Health