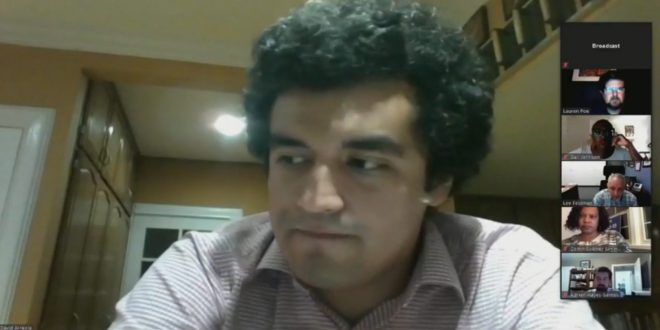 An exasperated Gainesville Commissioner David Arreola said Thursday that the ordinance could become “a travesty of epic proportions.”

Starting on Saturday, people in Gainesville can legally imbibe on city property.

The Gainesville City Commission on Thursday narrowly approved an ordinance that would temporarily lift restrictions on the consumption of open containers of alcohol on city property, including rights-of-way like sidewalks. The 4-3 vote in favor of the move was a response to the reopening of the University of Florida, with an influx of students back on campus and in the bars around campus and downtown.

Commissioner Harvey Ward described the ordinance as “a means to manage, to some degree, the places that people congregate and the way that they congregate.”

Commissioner David Arreola, however, said he thought the ordinance will not work, arguing that it’s too broad and does not manage the problem but simply moves the problem from inside a bar to the sidewalk outside.

Arreola also said he could see the reopening of bars becoming “a travesty of epic proportions,” and that he felt he was in “the Twilight Zone of local government.”

Commissioner Reina Saco expressed similar concerns regarding congregations on the sidewalks, though Gainesville City Manager Lee Feldman assuring her and Arreola that the city has the authority to disperse these large crowds of people if proper social distancing is not taking place — regardless of where a crowd is located.

Although both Commissioners Gail Johnson and Gigi Simmons had voted in favor of the ordinance during its introduction on Sept. 3, they expressed new concerns on Thursday night, citing a lack of information on the topic. They requested that discussion and a vote on the ordinance be delayed.

Mayor Lauren Poe and Commissioner Adrian Hayes-Santos remained firm, arguing that when bars reopen, if the city did not provide a place for people to go, students would group up inside the bars and increase coronavirus transmission.

Poe also cited data showing that the chances of viral transmission outdoors were less likely than transmission indoors. This plan, he said, is better than having police or code enforcement officers inside bars trying to uphold social distancing.

When asked about the plans to make outdoor areas more appealing to patrons, Feldman told commissioners that tables, chairs, and tents could be provided and spaced apart.

Nathan Skop, a frequent Gainesville City Commission critic, called in to voice his opinion, saying he was “looking forward to showing up to the steps of City Hall with a six-pack and maybe enjoying a beer.”

Ward, Poe, Saco, and Hayes-Santos voted in favor, while Arreola, Simmons, and Johnson were in dissent.

The ordinance is scheduled to take effect Saturday and will stay in place as long as the city remains in a declared state of emergency due to the COVID-19 pandemic.

Clarification appended: A previous version of this story stated that Arreola called the city’s loosened restrictions “a travesty.” He, in fact, predicted that the bars reopening would be “a travesty,” not the lack of local open container enforcement.

Brian is a reporter for WUFT News who can be reached by calling 352-392-6397 or emailing news@wuft.org.
Previous Santa Fe High School Makes Adjustments To Deal With COVID-19 Threat
Next The Point, Sept. 11, 2020: Battle Continues Over Florida Governor’s Nominee For State Supreme Court