BRADENTON — Although Carl Reynolds may not have a plush white beard and a robust belly, he does have the same altruistic tendencies as Santa Claus.

After the COVID-19 pandemic forced schools to shut down nationwide, Reynolds decided to donate Google Chromebook computers to any student in need.

He was inspired to start the movement “#EducationalLaptops” after noticing that his four children were struggling with the online transition, despite having two computers available at home.

“It’s been a very heartwarming experience,” Reynolds said. “We get a lot of people sharing their stories about how they’re struggling. They live in a one-bedroom apartment with four people, they just got laid off being a server and there’s no way for them to, to hardly make ends meet, so they had no idea how’d they have a computer for their kids to learn on for school.”

Reynolds has donated a total of 350 computers so far, with another 70 on backorder.

“There’s such a high demand, low supply,” Reynolds said. “The supply chain has been interrupted because many of the parts come from overseas, China.”

Tiffany Lazo, a mother of four, received one of the 350 computers distributed. She has a 4-year-old, 7-year-old, 11-year-old, and 16-year-old at home now. She said she never received training to become a full-time teacher overnight.

Lazo believes this computer is a lifesaver, as it will allow her family to spend more quality time together.

“It’ll give us more time,” Lazo said. “More time together, where we aren’t having to spend so many hours with each student. You know they can all kinda be working at the same time for the most part, um, and accomplishing it and being done, hopefully by dinner time, so we can sit together again.”

Another mother who received a laptop is Antoinette Goggins. She picked up a computer for her daughter, Heaven, but the other four children at home will be using it too.

“We want to definitely make sure that she keeps up with her schoolwork and unfortunately she’s not able to do that because we don’t have a laptop,” Goggins said.

After an overwhelming demand for laptops, more businesses decided to contribute to this cause. Now, Marcus & Company Realty, HomeBridge Financial Services, Hide-Away Storage Made Easy! and Bruce Williams Homes have offered their financial assistance.

“But, only enough to buy 10 to 20 laptops,” Reynolds said. “I don’t want to open the portal up and fill those spots up within minutes, I would rather have enough to buy another 100 or so.”

Reynolds wants to ensure that he has secured enough funding to supply more computers and he does not want to run the risk of overpromising to Bradenton families. To buy another one hundred laptops, it would require an average of $16,000.

Reynolds hopes more businesses will donate so that they can collectively help families in the community.

Before handing over the computer, Reynolds gives each student some advice.

Reynolds hopes his acts of service can continue to provide some temporary relief to these families.

Sofia is a reporter for WUFT News who can be reached by calling 352-392-6397 or emailing news@wuft.org.
Previous Animal Crossing Game Helps Cure Quarantine Boredom, Anxiety During Pandemic
Next DeSantis Could Boost Restaurants, Gyms 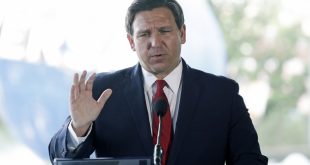 Florida Has Nearly Half Of Known US Cases Of COVID Variant

New data from the Centers for Disease Control shows Florida has nearly half the known cases in the United States of a mutated and likely more contagious strain of the coronavirus.