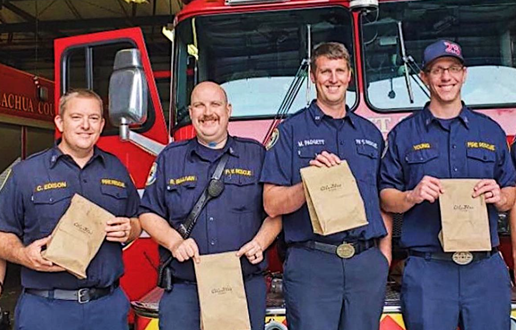 Sponsored meals for first responders have been ordered from Cilantro Tacos. It's one of the ways the community is keeping the restaurant in business. (Photo courtesy of Cilantro Tacos)

Below, listen to a version of this story that aired on WUFT-FM:

Restaurants have been one of the hardest-hit industries during the coronavirus pandemic.

“The biggest thing that we’ve seen change is our sales volume. We’re down about 75 plus percent,” said Jerry Roberts, one of the owners at Gainesville’s Gator’s Dockside.

He said business is slower ever since they had to close the restaurant for dine-in and switch to take-out only.

Nataly Meth, co-owner of Cilantro Tacos, said this transition has been challenging for her restaurant too.

“We just basically had to shift by doing everything curbside, take-out and pick-up and to interacting with people kind of through a plexiglass, which is very different from us because we’re very service-based.”

Meth said there has been a lot of uncertainty in the past month or so.

“We see a lot of restaurants take such a big hit and, you know, we felt so much anxiety and so scared when this first all started.”

Like many other restaurants, Roberts has had to cut his employee’s hours because they’re not as busy.

“We haven’t called it really a furlough, but we just told them that we don’t have the hours for them right now and that if they need to collect unemployment, you know, that we totally understood,” Roberts said.

“We are definitely ingrained in the small business community,” he said. “We want to make sure that the Gainesville economy and our sense of community stays strong through this. It’s a tough time for everybody.”

Meth said donations to these funds and the sponsorship of meals has been a huge help to both her restaurant and the community.

“People have been sponsoring meals for first responders and hospitals and they, ironically, choose us so at that point we try to kind of bulk price everything out for them just so we can get everyone fed and, you know, it helps us out tremendously that they even think about supporting local.”

Stumpff has even been able to hire some of those unemployed restaurant workers.

“Even super established restaurants are struggling right now because of the virus,” he said. “I’ve been able to put some of those furloughed restaurant workers to work temporarily until their job comes back, so we’ve actually been able to hire and help the community by hiring some people who were out of work as well.”

It’s more important now than ever for Stumpff to be able to lend a helping hand to his community.

“We’re just, you know, trying to keep Gainesville strong and hopefully everyone will rebound and businesses don’t have to close permanently and we’ll make sure we take care of everybody.”

Stumpff isn’t the only one who’s been able to do this. Jon DeCarmine, executive director of GRACE, has also offered temporary work to unemployed restaurant workers.

“We’ve hired laid off restaurant and bar employees to clean and disinfect the campus for 10 hours a day,” DeCarmine said.

DeCarmine said he made a point to get in contact with local restaurants to see how he could help.

“We had reached out and seen that they would have to be laying off staff and we would have some greater needs as it came to cleaning and disinfecting and it seemed like a natural fit that we can reach out and provide their employees at least some wages during this time until they’re able to get back on their feet.”

He believes this is the least he could do to give back during this time.

“Over the past six years, the Gainesville community has been wonderful to GRACE and has supported us in all kinds of ways,” he said. “As we are able to continue operating through this pandemic, it’s been great that we have been able to turn around and help take care of some of those businesses now by hiring laid-off employees.”

Local restaurant owners like Meth remain hopeful during this tough time due to Alachua County’s strong sense of community.

“I really personally think that the community really came together in a time where it feels like everything is about to fall apart, and we don’t feel alone in this as much as we thought we would.”

Gabriella is a reporter for WUFT News who can be reached by calling 352-392-6397 or emailing news@wuft.org.
Previous The Point, April 24, 2020: Floridians Recently Unemployed To Get Second Chance At Relief Benefits
Next By The Numbers: Coronavirus Update