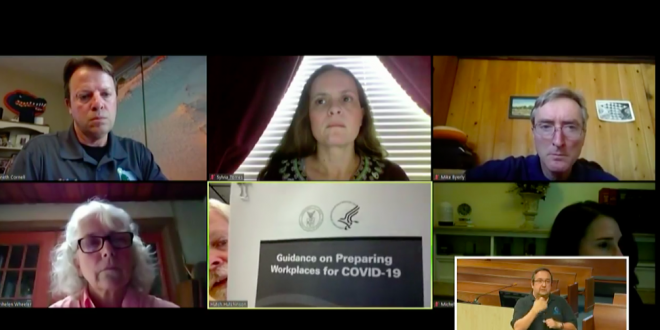 The Alachua County Board of County Commissioners struggled to maintain a united front on Friday afternoon as a collegial conversation about their emergency stay-at-home order at times turned into a heated debate.

This special meeting was held as a follow-up to the commission’s emergency meeting on Tuesday, when they discussed proposed changes to the emergency order. The previous meeting was adjourned with the suggestion that each commissioner would go out to different grocery stores in Alachua County such as Publix or Walmart and come back with their observations.

Commission Chair Robert Hutchinson defended grocery and retail occupancy restrictions laid out by the emergency order implemented Monday that he had a part in composing.

Currently, Emergency Order No. 2020-09 allows one person per every 1,000 square feet to be present in any given establishment.

A concern emerged as the week went on: It’s resulted in occasional long lines to enter stores throughout Alachua County.

“The retail friction we have created — particularly with grocery shopping — the shock and awe worked,” Hutchinson said, according to his observations since the commission’s last meeting.

“I’ve been to probably 15 different grocery stores at different times of the day observing, and things are nowhere near as apocalyptic as some people are making them out to be,” he said.

The line to get in the store itself was of the most concern to Commissioner Mike Byerly, as he described his own observations from the week. He argued that the current mandated six feet of distance between people — a federal recommendation — is likely not enough.

Allowing more people in the stores at once will be the key to improving safety and reducing exposure, according to Byerly.

“The main point,” Byerly said, “is that six feet — and of course that varies from four to eight (feet) constantly, as people are moving, standing on things and with more than one person standing together — still leaves them clumped together.”

As many as 12,000 people watched or scrolled past the nearly two-hour live meeting on Facebook, leaving nearly 1,000 comments.

“Completely agree, Byerly!” Michele Childers wrote. “You’re less likely to get it by simply walking past someone inside the store. Yesterday I stood in line, and both the guy in front of me and the lady behind me seemed oblivious to the 6 foot distance requirement.”

“The reality of the situation is that if we have a positive case in a grocery store, there is the potential that the health department could shut it down,” and “the current limitations could become a lot greater if we aren’t careful — I think we need to protect those folks,” he said.

Hutchinson agreed with him, saying that the order should lay out the Occupational Safety and Health Administration’s (OSHA) standards for both low and high-risk establishments.

“These are just guidelines by OSHA, but we’re going adopt them as county standards, and therefore they become enforceable,” he said.

The commission chair ultimately decided not to make further amendments to the current occupancy restrictions, despite significant rebuke from the other commissioners.

Golf courses, which are not currently defined by the emergency order, also came up during the meeting.

“I don’t have any problem with golf courses, as long as people stay 10 feet apart,” Cornell said, joking, “Whenever I play golf, I’m usually in the woods by myself.”

Hutchinson agreed that people golfing, in general, would not trigger any risk and “people do need to get out and enjoy themselves,” he said.

The board’s next step is adopting the new rules they discussed and setting a timeframe to put them in place. Hutchinson said at the moment, the county has some time and can avoid a more draconian lockdown.

“Things are going pretty well,” he said. “We don’t have rampant infections and our hospitals aren’t stressed… if things do get a lot worse, we are going to have to start doing a lot more.”

Jourdan is a reporter for WUFT News who can be reached by calling 352-392-6397 or emailing news@wuft.org.
Previous ‘I Realized I Was Somebody’: Gainesville Group Celebrates 100 Years Of Women Voting And Modern Women’s Liberation
Next The Point, March 28, 2020: Florida Universities Are Citing A State Law To Keep Their Pandemic Plans Secret