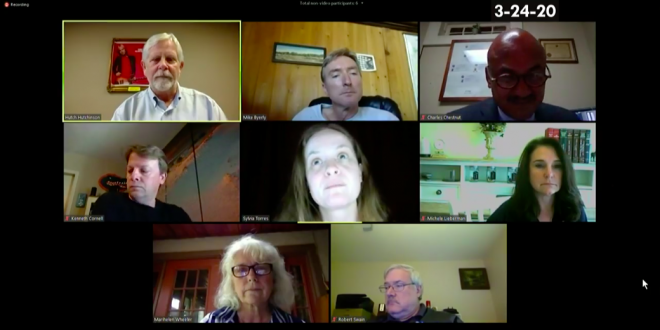 Hutchinson shared his view as the county commission met for two hours via video conferencing to discuss the impact of the emergency order, which took effect earlier in the day.

Emergency order No. 2020-09 mandates that all citizens in the county must stay at home except for prescribed reasons, and it called for the closure of all non-essential businesses. The document also detailed which types of businesses were to be deemed essential and non-essential.

The restriction garnering the most attention was the one mandating for social-distancing purposes that non-medical businesses shall not have in their store more than one person per 1,000 square feet. No customer was to be within 6 feet of each other, the order states.

Hutchinson told the commissioners that he had only seen customers waiting 20 minutes outside supermarkets, and that the lines were being “managed extremely well by employees.” He also said he had not received or heard any complaints about the lines.

“A lot of folks on the east side of town don’t have the resources to have groceries delivered to them,” Chestnut said. “Those are the people who I see on Main Street waiting in line, and I am concerned about those people being able to get food.”

The public was banned from attending the meeting in person, but it was made available for viewing via cable TV broadcast and a Facebook livestream.

More than 8,000 people had watched at least a portion of the livestream before it ended, County Manager Michele Lieberman said. More than 17,000 had done so by early Wednesday – and at least 1,500 people had written a comment about the proceedings or executive order.

“Great model – online ordering – but you are assuming that everyone has a computer, but they don’t, so you are eliminating an entire part of the community,” Leah Eland, of High Springs, wrote in a comment during the livestream.

Lieberman said grocery store owners or managers had raised concerns to her about customers being urged to use third-party options. She also said the Alachua County Sheriff’s Office had expressed concerns that the long lines might cause panic and unnecessary hoarding of supplies.

Commissioner Ken Cornell suggested adding language to the order that forces all retail stores to post signage to remind customers of the Centers for Disease Control and Prevention recommendations about social distancing.

“I would like to say that I like the approach that you took, Hutch,” Cornell said of the executive order in total. “However, on the occupancy, I’m not a fan of using that type of approach. I think the intention is good, but I also think that we can rely on the essential businesses to follow the CDC guidelines inside and out.”

The commissioners agreed to add pawnshops to the executive order’s essential business category, citing that for some residents they are a stream of income. Real estate companies would also now be considered essential, but with a specific model of best practices. Insurance, moving and relocation services were also to be classified essential.

Hutchinson said the order was modeled after ones decreed for Broward County and Illinois.

“The Broward County model, most of our essential and non-essential businesses are from that, but it turns out that the Illinois state model is a much better way of branding stay at home,” he said. “So anyway, we cobbled together the front half of Illinois and the back half of Broward County, and then we had to sort of make those work together.”

The commissioners agreed to continue monitoring their order’s impact and to reconvene Friday for further discussion. Meanwhile, Hutchinson urged adamancy about the occupancy restrictions.

“That’s the whole point of this – we’re trying to make it harder for people to just go shopping,” he said. “What people are doing, they’re just left with all of this time on their hands, whether they like it or not, and they say, ‘Let’s go shopping.’”

Jourdan is a reporter for WUFT News who can be reached by calling 352-392-6397 or emailing news@wuft.org.
Previous From the Front Lines: Hearing From a Child Care Worker
Next The Point, March 25, 2020: 2-Year-Old Girl Is The Youngest Person To Test Positive For Coronavirus In Alachua County