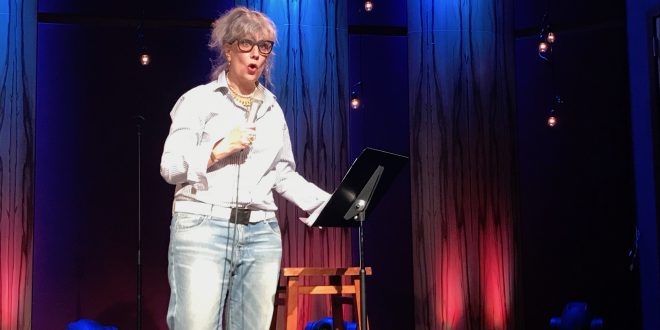 Changeville Brings Together Artists And Activists To Collaborate For Social Change

Alia Sharrief, a Muslim rapper from California, spat verses about feminism and minority communities in her song “My Girls Rock” at Heartwood Soundstage. As she did so with palpable energy, 135 witnesses echoed the chorus – “my girls, we rock” – with her.

Lizz Winstead, a co-creator of “The Daily Show” who lives in New York, mocked politicians and advocated for abortion rights. The audience roared as Winstead mimicked House Speaker Nancy Pelosi tearing a copy of President Donald Trump’s State of the Union Address.

They were among more than 15 artists who sought to use their craft and talents to unite communities and activists for social change at the recent Changeville festival in Gainesville.

For the past five years, artists have gathered at the two-day event to celebrate activism and help spark conversations about how they can contribute more to their communities.

More than 50 local social activist organizations took part in the festival, which was designed as a safe space to discuss how to bring about social and environmental change in the city together.

David Melosh, a co-owner of Heartwood Soundstage, said Changeville aims not only to celebrate the changemakers’ achievements, but also to show how art and storytelling can heal.

“The music is the elixir breaking down barriers,” Melosh said.

He said too many local social activist groups are working separately toward the same goal, which hinders their progress. He wants them to break the “silo effect” by getting to know each other.

“Something we’re going for with Changeville is that music puts people in the mindset that anything is possible,” Melosh said.

Winstead, 58, founded “Abortion Access Front” in 2015 to use her art to make a difference. The organization hires comedians to perform stand-up at comedy clubs around the U.S., with the money raised sent to fund refurbishments for independent abortion clinics, she said.

Some comedians from her team performed at Changeville. They also built new chairs and refurbished the interior of Bread and Roses, one of three independent abortion clinics in the city.

During a talk-back with managers of Bread and Roses, Winstead talked about when she had an abortion, and how she hopes to change the negative stigma about the matter for all women.

“An abortion procedure is a journey,” she said.

Aaron Colverson, 34, is a doctoral student at the University of Florida who is studying music from the cultural and social aspects of the people who make it. He served as a panelist alongside musicians who discussed ways in which music can heal trauma in communities.

“We can figure out a way to use music to communicate similarities,” Colverson said. “How important it is to address our differences in order to find some common ground.”

Sharrief, 28, was also on the panel. The African-American and Muslim woman said her music promotes positive change for women, people of color and those of various religions. She also teaches rap and hip-hop to underprivileged elementary school children back in Oakland, she said.

Stressing that music has been a communal healing power for centuries, Sharrief said: “We don’t put enough emphasis on the freedom songs from slavery, knowing that people literally escaped being enslaved by codes in songs. I’m a product of my ancestors who came before me.”

Sharrief then sang the chorus from “Wade in the Water,” a spiritual associated with slavery.

“Music tends to speak really clearly to people,” she said, adding it’s used as “a tool to get through times that are tough.”

Emma is a reporter for WUFT News who can be reached by calling 352-392-6397 or emailing news@wuft.org.
Previous West End’s Closure Leaves Community With Questions
Next The Point, Feb. 11, 2020: Felons Must Pay Fines And Fees Before Voting, But Florida Courts Struggle To Collect