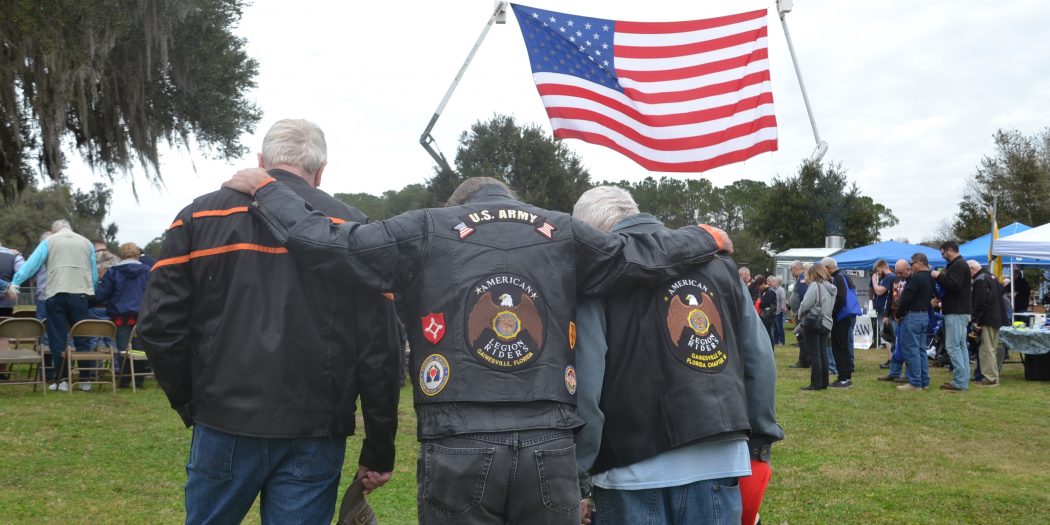 Following the pledge of allegiance, attendees of the Vietnam War veterans tribute event in Gainesville observed a moment of silence for fallen servicemen. (Edysmar Diaz-Cruz/WUFT News)

Vietnam Veterans Ride To Honor One Another At Second Annual Event

To these Vietnam War veterans, freedom sounds like the roar of a motorcycle engine.

About 80 people – including veterans, members of motorcycle clubs, hospital staff and other supporters – gathered at the Malcom Randall VA Medical Center in Gainesville on Saturday to participate in a tribute ride.

Chaplain Justin Maynard of the U.S. Department of Veterans Affairs began the second annual event with a prayer: “As our kickstands are raised, we ask that you would keep the rain away, keep the bugs off our faces and protect these riders as they honor our Vietnam veterans.”

Maynard also prayed for them to feel supported, respected and loved by their communities.

Escorted by five sheriff’s deputies, the fleet of motorcycles embarked at 10:30 a.m. on a 15-minute drive to Veterans Memorial Park, where a second event awaited the riders, their friends and family, and community members looking to show their support. As motorcycles left the VA parking lot, supporters shouted from the sidelines: “Welcome home.”

Thomas Wisnieski, director of the North Florida/South Georgia Veterans Health System, followed the escort in his sleek 2015 Road Glide. Two years ago, Wisnieski decided to plan an event that would include veterans’ affinity for motorcycles. Last year, the inaugural event felt like a natural fit and he believed it was a suitable way to honor the veterans every year.

Wisnieski likened it to making up for not having a parade welcoming them home from Vietnam.

Forest Hope, 72, served in the Marine Corps and remembers how people treated him when after the war he returned home to Gainesville to Santa Fe College for an associate degree.

“We were outcasts,” Hope said. “We were shunned by society, even by our own friends. All we wanted to do was pick up life where we left off. We had human feces thrown at us. We had eggs thrown at us.”

Hope said he grew his hair long, opting to look more like a hippie than a man who served in the war.

Today, Hope serves as president of the Vietnam Veterans of American Chapter 1092 in Alachua County. He seeks to provide support and services for people who had similar experiences.

The U.S. flag rippled through the wind as the second event began with the pledge of allegiance. Later, attendees circled a patriotic demonstration in which veterans – wearing camouflage uniforms and holding gun props and diffused smoke bombs – recreated their combat experience.

One resource available to attendees was an online registry of veterans, in which individuals could be found with a name search. According to Justina Wells, the health system’s chief of the office of communications and outreach, veterans have found long lost comrades whenever using the registry. They keep tissue paper nearby, Wells said.

“The room fills up with veterans looking for people,” she said. “One veteran came in with very little information. After doing some digging in the registry, they were able to find out more.”

Michael ZuBari Sr., 58, of the Shahili Motorcycle Club and who served 21 years in the Army, felt a mix of emotions as the afternoon activities and demonstrations unfolded.

ZuBari rode to the event from Apopka, Florida, with two other club members.

“It brings back sad, complicated emotions,” he said. “The memory of the Vietnam era has been diminishing. I think it’s important to have visual descriptions to bring back its memory.”

Edysmar is a reporter for WUFT News who can be reached by calling 352-392-6397 or emailing news@wuft.org.
Previous Where Healthy Food Is Scarce, A Dream Of A Flourishing Fruit Tree In Every Yard
Next Homes On Wheels Exposition Showcases Lifestyle Of Tiny Living In Vehicles

As inflation rises across the country and fuels growing food insecurity in local communities, the …