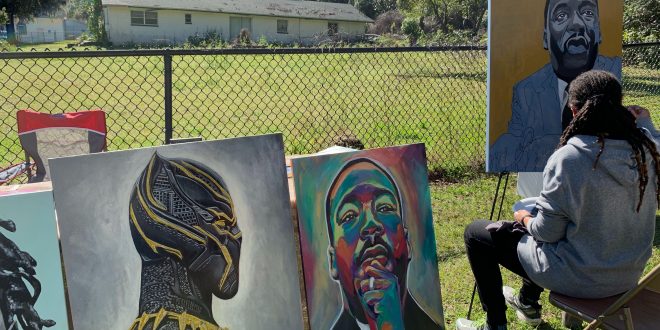 Local artist Yvonne Ferguson showcased her talent by beginning a piece at 10:30 a.m. Her progress on the right is visible two hours later. (VIviana Moreno/WUFT News)

The familiar lyrics of “Stand by Me” filtered through the chilly mid-morning air as guests filled the grassy area and greeted each other with wide smiles.

These were the preparations for a day filled with celebrating Martin Luther King, Jr.

“You are very, very important,” she said, glancing around the crowd that had gathered before her.

The spirit of King’s message rang true and was echoed in each speech and performance – the idea of bringing the community together in solidarity.

Brittany Coleman, who lives in Gainesville, decided to attend Alachua’s festivities this year. She believes these types of events often stimulate community connections and remind people of the area’s resources and achievements.

“It gives people an opportunity to come together and celebrate Martin Luther King and the civil rights movement and what that did for us as a country,” she said.

Over the chatter of guests exchanging greetings and filling up paper cups with hot chocolate, she added that she hopes it “gives people energy to continue connecting” and push to continue organizing events such as this one throughout the year.

The event boasted inspiring speeches and a call to action among the crowd. Many individuals on the stage talked about motivating the youth, inspiring the community and engaging in the conversation today surrounding activism, especially on a local level.

Part of the event involved community outreach. Lined up along the periphery of the area were a few tables set up to promote Yvonne Ferguson, a local artist, and share information about voting and census data collection.

Representatives from the 2020 census invited attendees to learn more about the importance of participating in the official census counting. Representatives explained that “$700 billion are up for grabs” that can be dispersed to communities to pay for road construction, housing and other projects. They stressed that the census could ultimately result in a “better standard of living” and create more jobs.

Kim Barton, the Alachua County supervisor of elections, greeted attendees at her booth where she welcomed guests to register to vote and find out about this year’s voting schedule.

When Watson was called to the stage, he delivered a few words detailing his background growing as a “hometown boy from Alachua.”

“Alachua is my history,” he said. “Alachua made me.”

He continued to focus on the idea of failure and success, insisting that there is no excuse for failure today when “the people who came before us” accomplished feats without the opportunities available today.

“We can because they did,” he said.

Other speakers reinforced this sentiment. Among them was the Rev. Eugene Franklin who highlighted the role economic opportunities and local aspects such as the arts, food and culture play in fostering a strong community with a solid foundation.

“No matter where you come from, people can be brought together,” he said.

From the young children jumping to the sound of the drum’s beat to the adults swaying their hands in the air, the sentiment of community and respect reverberated through the space.

A question remained from Watson.

“What are we doing with the freedom Dr. King has given us?” Watson asked.

His question focused the event into one meant to honor the efforts and achievements of King but also reminded the crowd about challenges they may still be facing today.

“We have to come up with new dreams to deal with the difficulties of the challenges of changing times,” he said.

Viviana is a reporter for WUFT News who can be reached by calling 352-392-6397 or emailing news@wuft.org.
Previous How The Senate Impeachment Trial Will Work
Next The Point, Jan. 21, 2020: ‘Do-It-Yourself DNA Kit’ May Have Solved a Cold Case in South Florida