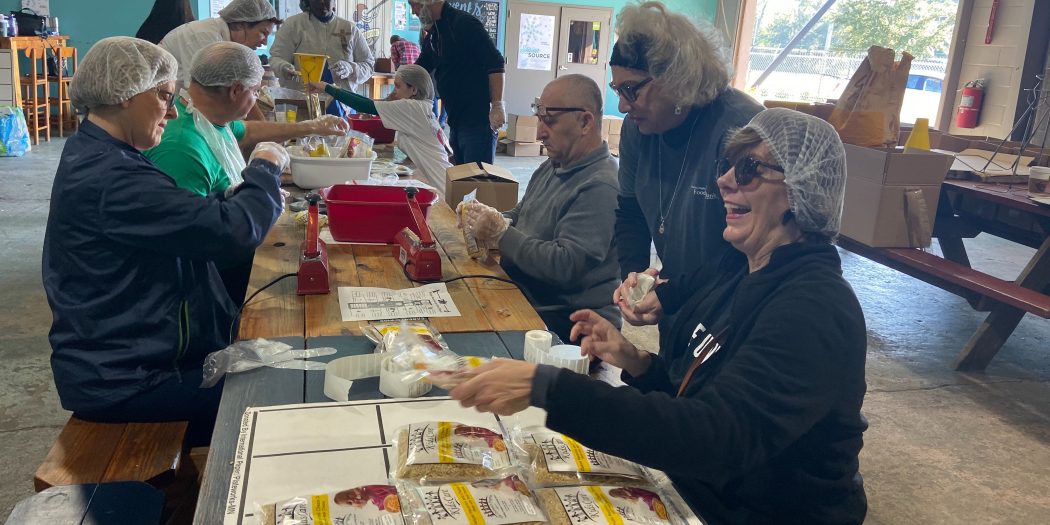 Dana Clayton, vice president of United Way of North Central Florida, laughs as she organizes packs of macaroni. Thirty-six bags of macaroni were packed into one box. (Dana Bryan/WUFT News)

The screech of packing tape, laughter and the crunch of dry macaroni on the floor were the sounds volunteers made as they packed 9,000 meals Thursday morning.

United Way of North Central Florida and the food delivery company Bite Squad partnered to pack macaroni and cheese for people in the Gainesville area who are food insecure.

Alachua County had one of the highest food insecurity rates in the state in 2017 at nearly 20%, according to a study done by the organization Feeding America.

Although United Way and Bite Squad made up the masses, people from a variety of organizations or companies came out to show their support, including Verizon Wireless, Vet Space, Meridian Homeless Recovery Services and ServPro.

Victoria Wedgwood, a volunteer from Vet Space, has been volunteering since she was seven years old.

“It’s important to give back for the benefit of others, for them,” she said. She said that’s a lesson she grew up knowing and understanding at a young age.

After going through a sanitation process, volunteers were placed at different stations to package the macaroni until their shift was over.

The macaroni was funneled into a storage bag, weighed, sealed and boxed. This process went on for hours, as each brown box was filled with 36 bags of macaroni and cheese. Soy was also added to each bag for nutritional value.

Paul Larocco, a volunteer with Bite Squad Ocala, smiled and told jokes while weighing each bag of macaroni.

Larocco remembers coming home at the age of 12 and his mother having a surprise for him. She had bought cable TV for him to enjoy.

Cable was only slightly above $10. “But even that was a stretch for us,” he said.

Larocco was given a prosthetic leg earlier this year, after the decision was made to remove his left leg in September 2018. He was looking for a job that would promote his physical and mental recovery when he found Bite Squad.

He said that his hard times have humbled him and taught him the importance of giving back and volunteering.

“It’s not about having the biggest house or nicest car,” he said. “It’s about the people.”

The assembly line only paused for the occasional bathroom break or when a raffle ticket winner was announced.

When a volunteer signed in, he or she was given a raffle ticket with the chance to win a United Way swag bag.

The winners would shout “That’s me!” and then sit back down to continue packaging. The thought of winning a prize placed second to his or her determination to finish.

Becky Raymond, volunteer and the owner of SERVPRO of Alachua County West, said there was a point when her husband lost his job. She said if it wasn’t for her church family, they wouldn’t have known what to do.

“After that, I knew I had to give back,” she said.

Mona Gil de Gibaja, president and CEO of United Way of North Central Florida, urges people to give back during the entire year — not just the holiday season.

“Think about how you can give every month,” she said, “like when there’s buy one get one free at the store, buy an extra one and drop it off at one of our food pantries or homeless shelters.”

Dana is a reporter for WUFT News who can be reached by calling 352-392-6397 or emailing news@wuft.org.
Previous GNV Breaks Ground For Terminal Expansion
Next Deliberation Surrounding Gainesville Sports And Event Arena Continues