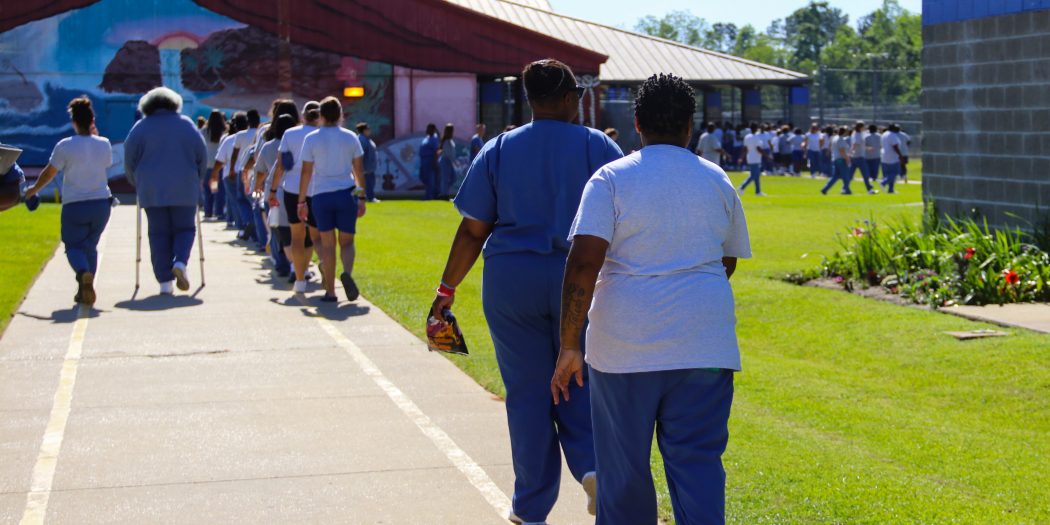 Inmates at Gadsden Correctional Institution walk to the recreation area on the compound on April 23, 2019. (Cat Gloria/ WUFT News)

Florida lawmakers abandoned a proposal that would have allowed thousands of nonviolent offenders in the state to be released from behind bars sooner in their prison terms, a plan that Gov. Ron DeSantis and law enforcement groups had criticized.

The amendment to the Senate’s public safety bill, SB 642, would have reduced the amount of time a nonviolent offender must serve from 85% to two-thirds of their full sentence. Sen. Jeff Brandes, R-St. Petersburg, had introduced the measure, which was dropped in the fleeting days of Florida’s legislative session in a compromise with the House of Representatives.

“House would not accept,” Brandes said in a text message about the proposal.

Sheriffs and prosecutors opposed the proposal in Florida. It would have required inmates to serve only as much as two-thirds of their prison terms before becoming eligible for release. Since 1995 Florida inmates have been required to serve at least 85% of their sentence.

“It needs to stay at 85%. It doesn’t make sense that we are sentencing people under certain sentencing guidelines that call for a certain range, but then ‘Well we really don’t mean it.’ It shouldn’t work that way,’” said Sheriff Bob Gualtieri of Pinellas County.

DeSantis had said, “the public gets upset” when offenders don’t serve their assigned sentence.

Florida prisons held about 96,000 people in 2018, according to the Department of Corrections, and 44% of those were considered nonviolent offenders. It costs the state about $22,000 each year for each inmate.

The proposal would have retroactively affected offenses committed on or after Oct. 1, 1995, cutting the prison population by 7,596 prisoners over the next year if passed, according to state estimates. Those affected would have been sentenced for crimes such as fraud, trespassing or drug trafficking, but not for violent crimes such as murder, rape or kidnapping.

Erica Medina had supported the plan. She grew emotional when talking to lawmakers at the Capitol about her husband behind bars. Abigael Maldonado was sentenced to 15 years for selling heroin, after she said he became addicted to painkillers while serving in the Army in Iraq.

“That leaves my youngest daughter with no father out here in the world until she’s in her 20s. At least with 65% it gives her time to enjoy her adult life with her father, he can be home by the time she’s 18,” Medina said.

Upon his return from Iraq in 2010 he resumed his old job as a sheet metal worker, but Medina noticed something different about him. She said her husband denied he was having problems.

“He had changed. He was really isolated, always kind of depressed,” Medina said.

Maldonado disappeared from Medina and her family for seven months in 2017, then he was arrested. The judge sentenced him under mandatory minimum guidelines, which requires judges to impose a specific sentence for certain offenses.

Maldonado had several other run-ins with the law since 2006 but prosecutors didn’t pursue the cases or gave him opportunities to avoid jail time.

Medina’s children have written letters to the judge about Maldonado.

“I would really love for my daddy to get help from a doctor because I know he is sick, but I know he can get better so we can laugh and play together again,” their 9-year-old daughter wrote.

Medina said she was heartbroken to hear the proposal was dead.

“What is Florida saying? We want to continue using these prisons as warehouses? The only ones making money are the ones that own these prisons. It’s sad,” she said.

The House Public Safety bill proposes raising the monetary threshold for a theft to be a felony and allowing inmates to apply for certain professional licenses before release.

Cat is a reporter for WUFT News and Fresh Take Florida who can be reached by calling 954-657-3385 or emailing cgloria@ufl.edu.
Previous Life After Separation
Next The Point, May 2, 2019: The Swamp Restaurant Has Planned Spot In New Property Development