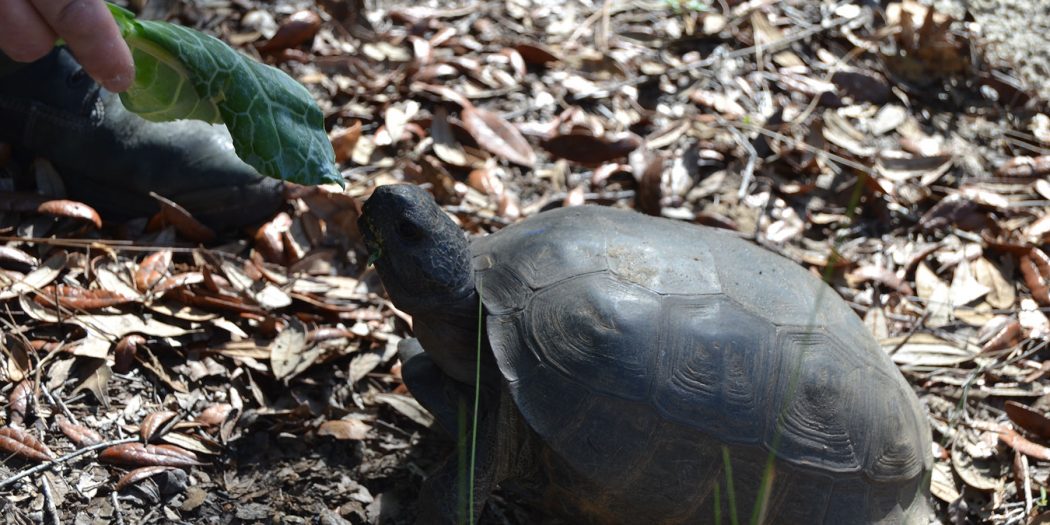 Blue the tortoise is eating a leaf of lettuce given to him by his handler and trainer. Pirtle is working to make the reptile a more social creature. (Eve Rosen/WUFT News)

In Florida, There’s A Growing Need To ‘Respect Your Elders,’ And That Includes Gopher Tortoises

Gopher tortoises typically spend around 75 percent of their time in their burrows but are more active during the months of April and May, due to the beginning of mating season.

The Alachua County Board of County Commissioners declared April 10 Gopher Tortoise Day as a means of promoting awareness of these reptiles. They were federally listed as a threatened species under the Endangered Species Act in 2007.

“In the last 12 years now since that listing status changed, we have done an enormous effort in Florida in trying to conserve this species and slow down its decline,” said Deborah Burr, who is the gopher tortoise program coordinator with the Florida Fish and Wildlife Conservation Commission (FWC). “I don’t know if we have reversed this, but I definitely know that we have slowed it down.”

FWC has promoted awareness of Gopher Tortoise Day and the protection of these reptiles since 2016 because gopher tortoises are a keystone species.

Their burrows are homes to 411 other species including the eastern indigo snake, the gopher frog and the Florida mouse. The tortoises burrow down to the water table — as much as 145 feet in depth. This provides a humid environment for the tortoises and other animals to live.

These tortoises are the only native tortoise species in the southeast and are found in all 67 counties in Florida as well as in Louisiana, Mississippi, Alabama, Georgia and South Carolina.

Some places in Georgia and Alabama also participate in Gopher Tortoise Day. Alachua County has been celebrating this day since 2017 but continues to promote this day because they are still a threatened species.

“Alachua County has been very on board, which isn’t surprising,” Burr said.

Chase Pirtle is the preserve’s gopher tortoise expert and fell in love with the species after beginning work there in 2013.

Blue is one of the longest-running gopher tortoises in captivity and has been in captivity for so long that it would be too difficult to transition him back into the wild. He is currently being trained to be an ambassador animal to help promote the awareness of gopher tortoises.

“Most of them are anti-social,” Pirtle said, as Blue scurried toward him for a piece of romaine lettuce.

Development is one of the main dangers threatening the species. The biological preserve recently lost a nearby site to development, where 70 to 80 gopher tortoises became entombed — trapped in their burrows.

“They can stay underground for about a year to a year and a half before they finally starve to death and run out of oxygen. This is just a terrible way for anything to go out,” Pirtle said.

The relocation of gopher tortoises is required for commercial reasons, but if it’s for agriculture, such as cows and crops, the tortoises do not have to be moved and the developer can kill every tortoise on the property.

The FWC recommends if someone sees one of these tortoises, leave them be because they will do no harm. The exception is if it’s crossing the road. FWC’s recommendation is to then safely move it to the side where the tortoise was heading.

“If you are fortunate enough to share your backyard with one of these tortoises or are looking to attract a gopher tortoise to your door, you can put down a variety of plants that they like to eat and they might just appear,” said FWC spokeswoman Karen Parker.

The species, its history and a fragile future warrant more attention, Pirtle said.

“You just get like a respect level for them when you see a bigger tortoise,” he said. “It’s like seeing an old person in society. Respect your elders.”

Everitt is a reporter for WUFT News who can be reached by emailing news@wuft.org or calling 352-392-6397.
Previous Man Sentenced To Total Of 34 Years In Prison In 2016 Killing Of Rapper Shay Baby
Next Animal Services’ Promotes ‘Sweet 16’ Tournament As Creative Adoption Incentive For Clay County

‘Farmers don’t get rich’: This Marion County couple decided to become farmers for their retirement

Marion County resident Yvonne Hart was on the hunt for an ulcer remedy when she discovered a potential solution: goat milk.