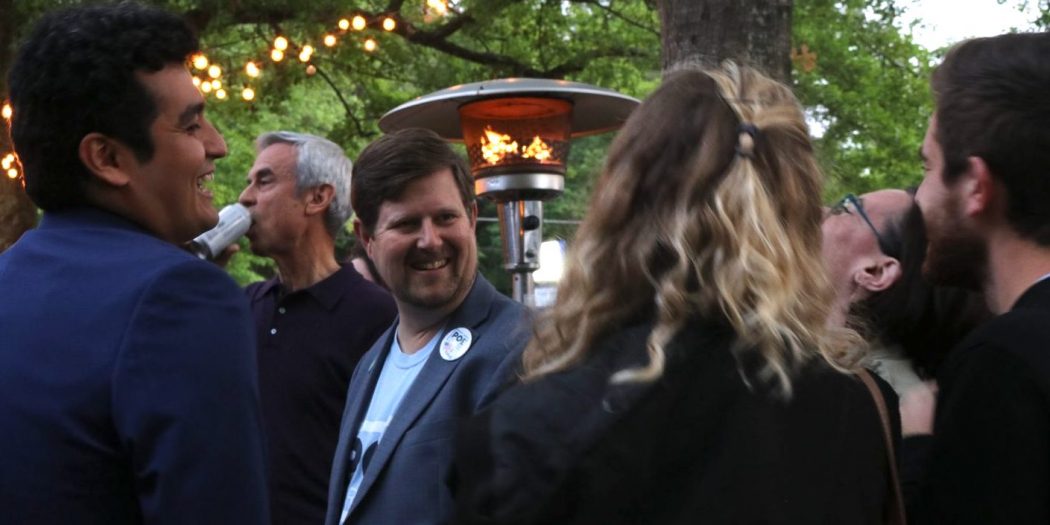 Mayor Lauren Poe laughs along with a group that includes Commissioner David Arreola at Public and General restaurant during his election watch party. (Jacob Berkowitz/WUFT News)

In the mayoral election, Jenn Powell garnered the second most votes at 18.47 percent. Jennifer Reid received 15.58 percent of the vote and Marlon Bruce received 4.13 percent of the vote, according to preliminary results from the Alachua County Supervisor of Elections.

Poe’s margin of victory over his three challengers was bigger than it was three years ago, when he defeated incumbent Ed Braddy with 57.05 percent of the vote.

“I’m so honored and proud to be the mayor that gets to represent all of that diversity and desire to make things better,” Poe said.

His platform was predicated on “progressive values” and “proven leadership.” In his upcoming term, he will look to continue the city commission’s momentum on equity issues like housing, wages and employment opportunities.

“We have been working on so many important issues, mainly focused on our equity gaps and the racial and socioeconomic disparities we have in our community,” he said. “That work came a little bit under attack and I’m glad the voters recognized how important that work is, how difficult that work is and want to see that momentum continue.

He also mentioned Commissioner Gail Johnson’s emphasis on listening to the community’s needs in her 2018 victory speech were to him.

“It doesn’t happen just on the dais. We need you,” he said.

Poe celebrated his victory with his family, friends and five of his fellow city commissioners at Public and General restaurant on Northeast 16th Ave. Commissioner Gigi Simmons was not in attendance, as she served on the city’s canvassing board.

“[Simmons] would not be allowed to endorse me. But I love her and we have a great working relationship,” Poe said.

Poe also thanked Hayes-Santos, who candidly addressed the crowd after confirming his victory. Like Poe, he said he was happy to keep moving progressive ideas forward.

“Thank you from the bottom of my heart. I’m not going to lie, it’s been a tough election,” he said. “But I wanted to focus on putting forth positive, progressive solutions.”

Hayes-Santos was also excited about the City Charter Review, which he brought to the commission to put on the ballot. It passed with 62.92 percent of the vote.

Both Poe and Hayes-Santos will each serve a three-and-a-half year term as the city moves to a fall election cycle.

In Poe’s case, the three and a half years will extend a political career that has so far totaled nine years on the Gainesville City Commission, including the last three as mayor. None of his opponents had held public office. In addition to the experience, Poe had a financial advantage as well.

His campaign raised $30,226.86 between monetary and in-kind contributions, more than double the $13,713.22 in contributions his three opponents received combined, according to campaign finance reports from March 17. His expenditures totaled $14,046.66, also greater than that of the $8,733.74 that Bruce, Powell and Reid spent.

“You want to do right in the community, but these financial obstacles are in your way,” Powell said before the election.

Turnout in the election was 12.95 percent with a total of 11,626 votes cast.  The mayoral election in 2016 took place alongside the Presidential primaries, which led to a high 44 percent turnout. But the 12.95 percent of voters showing out in 2019 was representative of typical general election turnout in Gainesville.

“I think this is pretty consistent with our expectations,” said TJ Pyche, the director of outreach for the Alachua County Supervisor of Elections.

The city’s move to fall elections could improve those low numbers in the future.

Jacob is a reporter for WUFT News who can be reached by calling 352-392-6397 or emailing news@wuft.org.
Previous Clean Creek Annual Trash Cleanup Collects More Waste Than All Previous Years Combined
Next The Point, March 20, 2019: Lauren Poe Wins Second Term As Gainesville Mayor