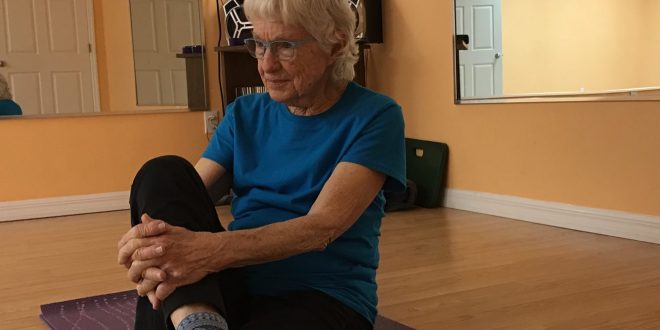 Caroline Anaya, 86, stretches on her yoga mat after teaching a class. She has always taught senior citizens and starts off each class by telling them "I won't make you stand on your head." (Josephine Fuller/WUFT News)

Caroline Anaya has exercised and taught fitness classes her whole life. She has been doing yoga for 25 of her 86 years.

She turns off the ceiling lights, lighting the mirrored room with a desk lamp in the corner. Once all her students finish setting up their yoga mats, she begins her lesson at the Hawthorne Fitness Center.

Most of the class attendees, and most of the gym’s 160 members, are senior citizens. There are classes three days per week and Anaya, a Hawthorne local, structures them to work for the older crowd.

They start out with deep breathing and stretching. They slowly work on areas that her students are usually sore in, like the knees, hips, and shoulders.

In her old age, Anaya had lost most of her flexibility, but yoga helped her regain and strengthen it.

“Yoga is really more than an exercise, it’s a relaxation of the mind and body, and it’s perfect for retirement,” she said.

Hawthorne resident Candice David said that Anaya, and the gym itself, has been a godsend.

“There are people who would like to be healthy and would have no other way if this place wasn’t here,” she said, “If you don’t have people like Caroline in the cornerstones of your community, it’s going to fail.”

Ciara Ring, fitness assistant at the wellness center, is on a first-name basis with almost every member. Whenever the front door opens, she’s there to welcome each guest with a warm smile. She knows what machine they start on, how many reps they usually do, and how long they’ve been coming to the gym.

When Ring, 23, first started working at the gym a few weeks after it opened in 2018, she had no idea her usual clients would be old enough to be her grandparents.

“It was definitely shocking to me, but I’m glad that we can be here for them in every way,” she said.

Nearly everyone at the Hawthorne Fitness Center greets each other and chit chats for a bit between reps. For many of them, this gym is a whole new community.

“The socialization is probably the most important thing they get by coming here,” Ring said. “Everyone knows each other, even if it’s just on a first-name basis, we all say ‘hi’ to each other here and back in town.”

Researchers have documented a positive correlation between social interaction and health. According to the National Institute on Aging website, seniors who get more social interaction have more regular systolic blood pressure and have a lower risk of experiencing symptoms of depression.

That’s not surprising to Jo Ann Winn, who is in her sixties and has been using the gym for a year.

She loves to kayak, so she has been working on her upper body and endurance so she can paddle for longer. She’s lost ten-and-a-half pounds, without dieting. She eats whatever she wants and just burns it off in the gym.

Along with achieving several of her fitness goals, she has also made new friends. She worked at the University of Florida and didn’t know many people in Hawthorne.

“I’ve met some real nice people,” she said, “Now when I go around town, I see people I know from the gym.”

She said she enjoys the little community she’s become a part of and sharing her success with others.

Josephine is a reporter for WUFT News who can be reached by calling 352-392-6397 or emailing news@wuft.org.
Previous As The City Celebrates Its 150th Anniversary, One Family Remembers Where Ocala Came From
Next Local Scientists Want Plastic Ban Amended For Greater Environmental Protection