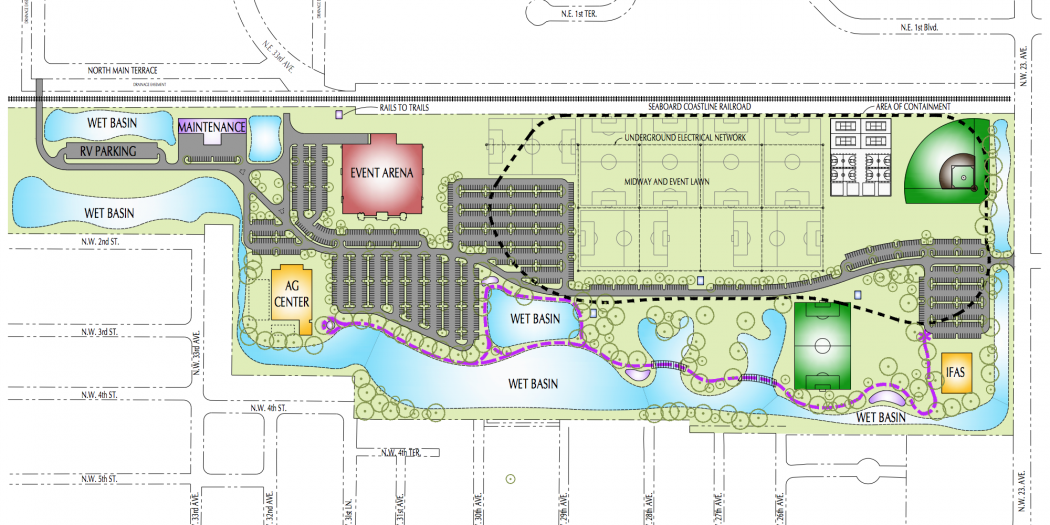 But the Board of County Commissioners isn’t entirely sold on the need for such an event center.

The county paid $40,000 to Victus Advisors to outline the benefits of either redeveloping Citizens Field, the Tacachale Center property or Koppers. Victus suggested Koppers, but county commissioner Mike Byerly said Tuesday he wasn’t certain the county needs an event center.

“I’m just not burning up to do this. I don’t know about y’all, but it kind of fell in our laps,” he said. “I keep coming back to: Maybe we’re just not a big enough community yet to do this. Given the financial stakes, I don’t want to gamble.”

The cost is currently estimated at $30 million, but commissioners agreed Tuesday that figure would likely increase to at least $50 million before construction was complete.

“I’m skeptical that the amount of money that we’re so far budgeting — the $30 million or whatever — is anywhere near what the final price tag will be by the time everyone gets their bells and whistles in,” county commissioner Robert Hutchinson said.

The Victus report notes the center would host “athletic events, banquets, graduations, motor vehicle shows, and various consumer shows, performances, and meetings. The recent renovations to the University of Florida’s O’Connell Center saw the loss of the region’s only indoor track and the loss of related events. The event center will include an indoor track that will draw events and visitors from throughout the southeastern United States and beyond.”

Tuesday’s special meeting was the first time that county commissioners had discussed the Victus report among themselves, with Alachua County and Gainesville commissioners set to review the project in a joint meeting on Thursday at 5 p.m.

Cabot-Koppers has been on the Environmental Protection Agency’s toxic Superfund list since 1983 and was first targeted last summer as a location for the new county fairgrounds. That project has since been moved to the Canterbury Equestrian Showplace in Newberry, but the county is still considering an event center on the former wood treating site. The city intends to redevelop the area around Citizens Field and in November released renderings of what that would look like.

City commissioners would have to approve the county’s rezoning plan for Cabot-Koppers for that site to move forward.

Ethan is a journalist at WUFT News. He's a Pennsylvania native who found a home reporting Florida's stories. Reach him by emailing emagoc@wuft.org or calling 352-294-1525.
Previous Jan. 29, 2019: Evening News In 90
Next The Point, Jan. 30, 2019: The Three Potential Locations Of A New Alachua County Events Center