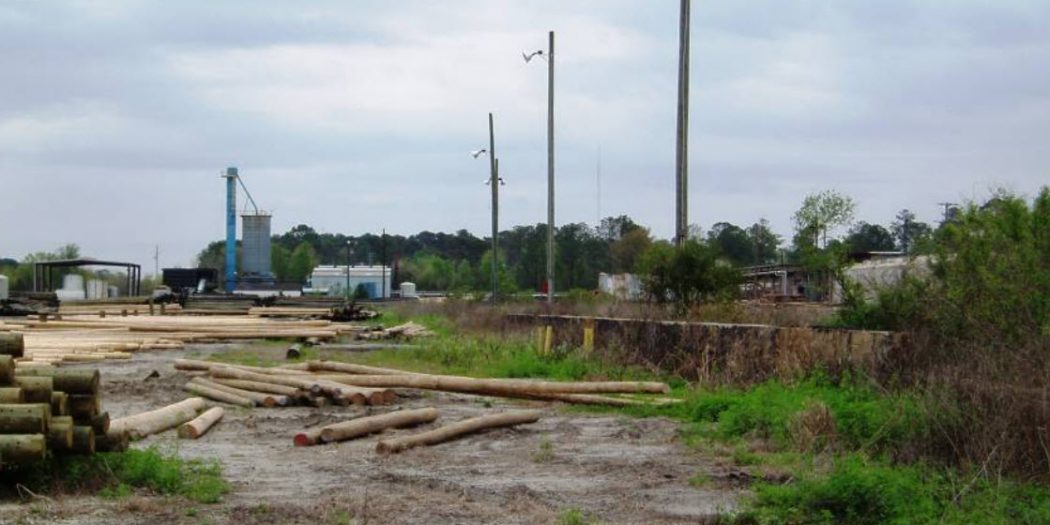 This is the former Koppers "drip track area." The possible Alachua County fairgrounds site was for decades a wood treatment facility. (Courtesy of Alachua County)

The Cabot-Koppers site in Gainesville was first placed on the Environmental Protection Agency’s toxic Superfund site list in 1983.

Thirty-five years later, it’s on a new list — that of potential locations for the new Alachua County fairgrounds.

County officials within the past month approached the property owner, Beazer East, about the idea of leasing or selling the 86-acre parcel just north of NW 23rd Avenue. Mitchell Brourman is senior environmental manager for Beazer, which purchased Koppers in 1988 and took over the site’s environmental liability. Brourman said converting the Koppers parcel into a fairgrounds is “an exciting opportunity and a good future land use” for what was a wood treating site from 1916 through 2009.

“But if we can get a deal done? That’s a whole different element,” he said. “We’ll work on it.”

The dozen or so neighbors in attendance voted for the group’s president — Robert Pearce — to write a letter to county commissioners, expressing the neighborhood’s support of the fairgrounds’ potential nearby relocation.

The commission will consider it and at least two others during a 1:30 p.m. meeting on July 11.

Sean Johnson was among those voting in favor before leaving to put his three-year-old son to bed.

“With raising a kid in the city, I’m always looking for new parks and more places to have trails, and I think it would incorporate into the city great,” he said.

A bike path would wind its way through or around the property, with Depot Park-style retention ponds helping to control stormwater runoff. Michael Selvester and Mandy Millam bought their house three years ago and would welcome additional flood control.

They also expressed reservations about the fairgrounds’ livestock agriculture facility being across a drainage pond from their home in the 3100 block of NW 4th Terrace, but Harriott said there’s time to adjust the site plan.

“They’re clearly very early in the stages and willing to take some input from us,” Millam said, “which is really comforting.”

Beazer is scheduled to complete surface-level remediation sometime in 2020, but Brourman said groundwater monitoring and treatment would have to continue for years afterward. It’s a process he said his company takes seriously.

“We operated a facility there for almost 100 years, and you can’t just erase industrial activity like that just by closing the sale or leasing a piece of property to someone else,” Brourman said. “Our obligations run way deeper than that.”

The remediation has been lengthy and multifaceted. For example, in 2013, nearby homeowners had a foot of contaminated topsoil replaced.

A 2007 presentation on the county website listed chemicals of concern such as naphthalene, benzene, and carcinogenic aromatic chemicals. Even if the county were to help to continue the cleanup while building the fairgrounds, Brourman said, “I just don’t want to paint the illusion that we could sell off the property and we’d be walking away from our obligations… It’s just a lot more complicated than that.”

University of Florida professor Ruth Steiner, an expert in urban planning, had a group of students this past year study the site’s future uses. While a fairgrounds idea never came up, they did propose either an amphitheater or even as “a food-based venue.”

“Throughout that discussion,” Steiner said, “we noted you wouldn’t want to use the soil there to grow the crops.” Still, she said, grass would grow on the site.

The county had originally planned the fairgrounds for a 100-acre parcel just east of Waldo Road north of the airport; that plan fell apart last month when county staff determined wetlands had spread too far across the property to make the $43 million project viable there.

“Particularly after Hurricane Irma, it probably wasn’t going to work,” Chris Bird, Alachua County’s environmental protection director, said. “It was flood prone, and there were going to be problems with trying to develop that site.”

County commissioners asked for other possible locations. The Cabot-Koppers is one of three right now, according to assistant county manager Gina Peebles. Others could materialize in July when the county commission hears from municipalities like Newberry who would want the fairgrounds nearby.

The Superfund site seems like “a really good match,” Bird said, if Beazer can finish its surface remediation while the county develops a new fairgrounds that would include an indoor running track among its facilities.

Compared to the possibility of Beazer selling the property for other uses under the property’s industrial zoning status — a junkyard or recycling center, for example — Pearce said county management or ownership would be “fantastic.”

“We don’t know what the hell (a different landowner) might want to do with it,” he said. “It’s sometimes a lot better to deal with the devil you know than the devil you don’t know.”

Beazer in 2017 paid about $17,000 in property taxes for the parcel, which the county would no longer be able to collect if it purchased it. Harriott said the county and Beazer representatives have also talked briefly about a 50 or 100-year lease, so the company and not the county would retain liability for the environmental cleanup.

Rusty Kestle, an EPA scientist based in Atlanta, said the agency is in favor of the proposal so far.