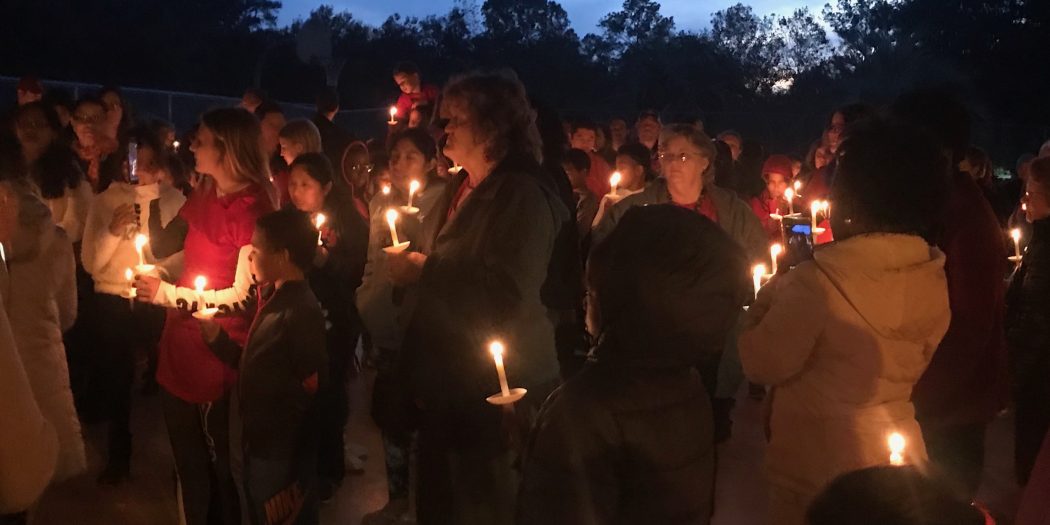 At least 200 people attended the memorial at Stephen Foster Elementary school to remember Leslie "Lisa" Williams and her daughter, Paige, who were killed two weeks ago. (Madi Spector/WUFT News)

‘We Loved Her More Than Anyone’: 200 Attend Memorial For School Librarian

One by one, at least 20 pupils stepped to the podium Thursday at Stephen Foster Elementary School in Gainesville to remember Leslie “Lisa” Williams, their librarian and media teacher.

One boy unfolded a piece of paper with a floral design and large handwriting on it, and placed it onto the podium before sharing, like all the other speakers, about Williams’ kindness and willingness to help.

“She always helped my friends and I do our presentations,” he said. “She was the best teacher I ever had, and it was really fun learning with her. We loved her more than anyone.”

Another pupil told of actually liking to read for the first time because of Williams, who also did the morning news announcements at Stephen Foster.

“But now that she’s gone,” the girl said, “I still like reading, and I love her.”

The pupils were among more than 200 people who attended a memorial for Williams, 57. She and her daughter Paige, 15, a student at Buchholz High School, were found dead in their home on Nov. 15 from stabbing wounds.

Paul Williams, 61, was charged Saturday with two counts each of first-degree murder, obstruction and evidence tampering in the deaths of his wife and daughter.

The pupils, their parents and faculty held candles as they gathered in a school courtyard.

“In Loving Memory of Lisa Williams” were the words attached to sign holding a photo of Williams on an easel.

“This candle burns for Lisa Williams. Forever present in our hearts,” read a framed sign placed on a table next to the easel. Another candle and sign shared the same for her daughter. Two tissue boxes were next to the signs, each one opened and constantly pulled from.

“Something life-transforming has happened to us,” Latham said. “Ordinary words sometimes fail us. Yet, it is impossible to remain mute. For many of us, Mrs. Williams was a smiling face every time you walked by her.”

After a moment of silence, two brunette girls stepped to the mic to represent Williams’ family. She had relocated from Port St. Lucie to Gainesville for her job last fall.

“This is my aunt Lisa,” said Callista Lamb, 17, referring to the photo close by. “And everyone was a little bit too distraught to come tonight.” Choking back tears, Callista continued: “Seeing everyone here, knowing that she was so loved – she was an amazing woman. I looked up to her. And the memories I have with her, I’ll forever hold onto.”

After the niece spoke, the microphone was offered to anybody who wished to speak. That’s when all the pupils lined up to speak about their love for Williams.

“Mrs. Williams said that her dream is that everyone else’s dreams would come true,” one girl said.

Lyrics from Hillsong United’s “There is No One Like You” filled the courtyard — first by two people, then by everybody.

“There is no one like you,” they sang. “No one else can touch my heart like you.”

Madison is a reporter for WUFT News who can be reached by calling 954-547-5167 or emailing mcsgator@ufl.edu.
@byMadiSpector
Previous Gainesville Church’s Event Creates Concern It’s Too Similar To Conversion Therapy
Next Where Waldo Got Its Name