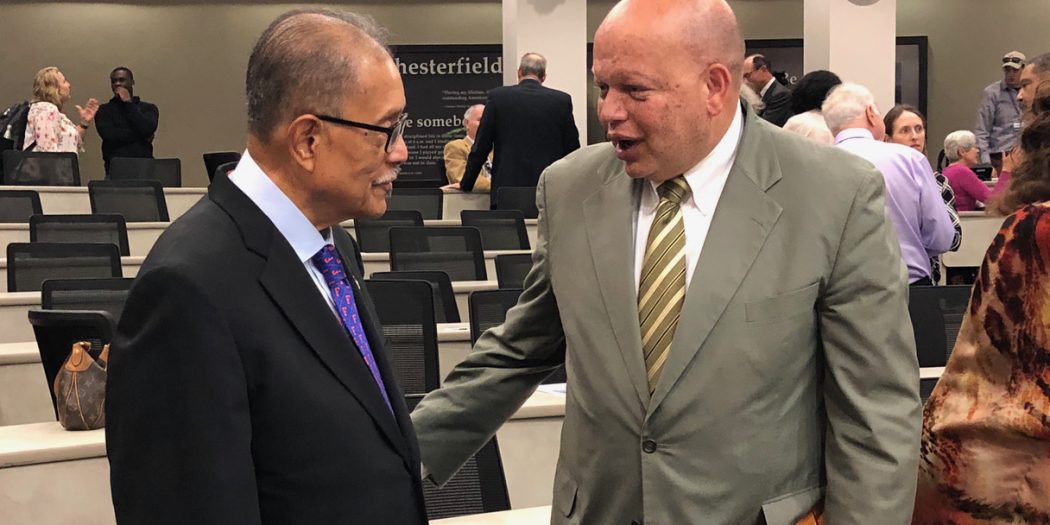 George Starke, UF's first black student, and Theodore Shaw, a law professor at the University of North Carolina and former president of the NAACP Legal Defense and Education Fund, share a moment after the commemoration this week. (Giovanna Kubota/WUFT News)

When George Starke Jr. enrolled at the University of Florida’s law school, he didn’t buy his books until the day before classes started.

It was 1958, and someone from The Florida Alligator advised Starke, the university’s first African-American student, to wait in order to minimize distraction or disruption.

Now 87, Starke, a native of Orlando, returned to the law school this week for an event commemorating 60 years of desegregation at UF.

“Standing in front of the school doors now is different,” Starke told an admiring audience seated in the Chesterfield Smith Memorial Classroom. “No more security guards or people looking at you – it’s different.”

Starke said he only stayed at UF for three semesters because too many professors and other students didn’t want him to succeed or graduate. The law school is now named after Fredric Levin, who Starke said was among the few students who befriended him while on campus.

“Because of the disgraceful behavior of leaders at this institution and leaders in this community, and the behavior even of our own students,” said Laura Rosenbury, the school’s current dean, “George Starke was never able to attain his dream of becoming a lawyer.”

The school’s Center for the Study of Race and Race Relations hosted the event. Its director, Katheryn Russell-Brown, who is also a law professor, said in her remarks that she was happy to see Starke recognized for his achievement, and apologized for the racism that he endured.

Russell-Brown noted that while many African-Americans left the South looking for a better life in northern cities, many of those who stayed behind continued to face injustice.

“Their desire was simple: to feel at home in the world. They wanted freedom,” she said. “It was the desire to be free that inspired Mr. Starke to apply to the University of Florida.”

In 1949, Virgil Hawkins of Lake County sought to enroll at UF with aspirations of being a lawyer, but he and five other black college graduates were denied admission based on their race. Hawkins sued, and in 1956 UF was ordered to admit him to the law school. He subsequently withdrew his application, causing Starke to be the first black student to enroll.

The event featured a panel discussion on race, law and desegregation. The panelists included Antonio Farias, UF’s chief diversity officer; Theodore Shaw, a law professor at the University of North Carolina and former president of the NAACP Legal Defense and Education Fund; and Carl Van Ness, UF’s historian and curator of archives and manuscripts.

Farias noted that a report card from the University of Southern California on racial equity released in September found that UF had earned an F grade for representation equity.

“The current population of African-Americans in the state of Florida is roughly 21 percent, and yet the representation across the state is at 12 percent,” he said. “The University of Florida itself is at 6 percent, and if you think other schools are doing better in the country, we are ranked, unfortunately, No. 2.”  Several UF students offered reflections during the commemoration.

“People don’t like to talk about the bad history about UF, and I think it’s important to talk about it, so we can bring change,” said Ana Mata, a third-year criminology student and president of Students Taking Action Against Racism (STARR).

Courtney Handy, president of the Black Law Student Association, said: “As black students at this institution, often there are times when we feel we don’t belong. But when we think about the history and the sacrifices and persistence of Mr. Starke, Mr. Hawkins and their families, I think it’s a motivation for us to continue to do the great work.”

Giovanna is a reporter for WUFT News who can be reached by calling 352-392-6397 or emailing news@wuft.org.
Previous Supervisors Of Elections Prepare For First Statewide Recount In Florida’s History
Next Nov. 9, 2018: Afternoon News In 90