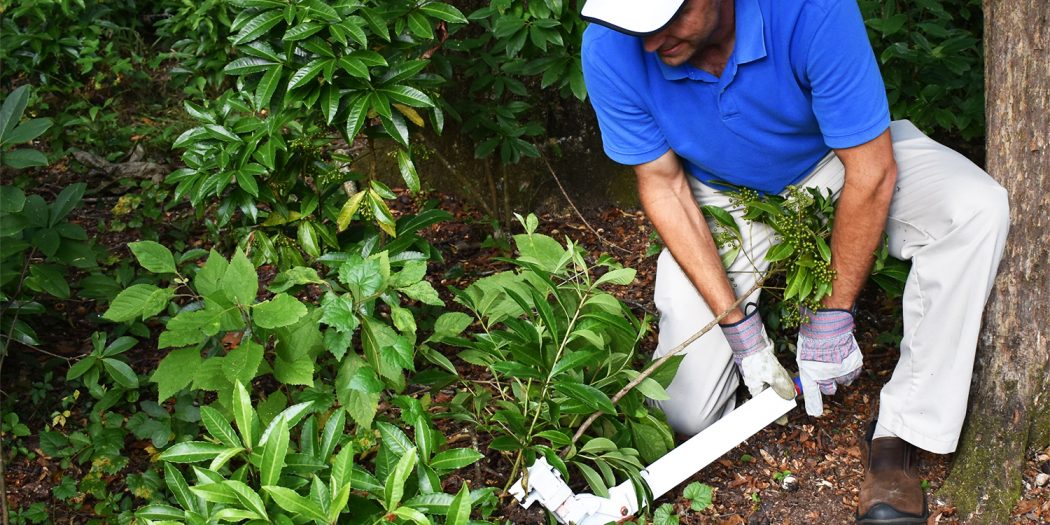 In Paynes Prairie – and many Florida property owners’ backyards – lurks a shrub with glossy-green scalloped leaves and, for part of the year, festive red berries. Beautiful as it may be, this shrub is taking over.

Around the year 1900, horticulturists introduced the ornamental plant coral ardisia to Floridian gardens. It is native to areas from northern India to Japan. The shrub, with the Latin name Ardisia crenata, soon escaped cultivation and invaded native Floridian woodlands. As an exotic invasive species, it needs to be managed. Experts recommend helping with management by starting in your own backyard — and now is the best time of year to do so.

The “crenata” part of the Latin name comes from its crenate, or scalloped, leaf margins. It produces small white flowers in the fall, and in the weeks before Christmas, it sprouts bright red berries, inspiring the colloquial nickname “Christmas berry.”

Coral ardisia produces many fruits and has a very fast growth rate, said Dr. Stephen F. Enloe, an associate professor in the agronomy department at the UF/IFAS Center for Aquatic and Invasive Plants. When the plant drops its berries, seedlings sprout underneath the parent plant. The plants can mature to produce fruit within two years from seed, leading to a continually growing carpet of invasive greenery that can take over native woodland areas.

“The seedlings have an incredible tolerance for very low-light conditions, so it’s found its niche within a lot of wooded systems,” Enloe said. “There can be hundreds per square meter.”

Since the state of Florida acquired Paynes Prairie in the 1970s, the park has battled against the shrub and other invasive species to return the prairie to its natural state.

On National Public Lands Day, which fell on Sept. 22 this year, the prairie called on 44 volunteers to tackle coral ardisia in a six-acre triangular area, said prairie employee Hannah Van Horn. The volunteers hand-pulled saplings and plucked berries off larger bushes. Because of their thick root system, hand-pulling larger plants is too difficult.

“They have like a Medusa-head root system,” said Van Horn, a member of the Florida Conservation Corps Project ANT (AmeriCorps Nonnative plant Terminators). “If you don’t pull all of the plant out, it can re-sprout very easily from the roots you leave behind.”

Throughout the year, ANT project members from various parks form strike teams and go back through infested areas with herbicides to tackle what volunteers can’t remove by hand, she said.

While Paynes Prairie has seen some success in combating the invasive shrub, coral ardisia is here to stay in Florida, Enloe said. The goal is now to manage its spread.

“We have shown that we can make significant dents in its population,” he said. “Whether it’s herbicides or hand-pulling, persistence is the key.”

Of course, education is a big part in managing the species, too. Enloe stressed the need to educate people who aren’t familiar with its trouble-making tendencies to get on board and get it out of their yards.

“It’s a beautiful plant, but what you don’t realize is it’s creeping out into the woods beyond your plantings,” he said.

In addition to crowding out native plants in woodland habitats, coral ardisia has another negative trait – a symbiotic (beneficial to both) relationship with a toxic bacterium. According to Van Horn, bacteria live inside the plant’s leaves and consume nutrients from the plant. Coral ardisia benefits from this relationship when the bacteria produce a toxin that makes the leaves off-putting to hungry animals. The plant’s berries, however, are still edible for animals like birds, which further spread the plant by excreting seeds after digesting the berries.

When tackling the shrub, the best method of attack is hand-pulling, Enloe said. At this time of year, most coral ardisia shrubs have already dropped their berries and will not sprout more until November or December. With no berries to spread, this is the best time of year to remove the plant.

“Hand-pulling can be a little challenging, so get some good leather gloves,” he said.