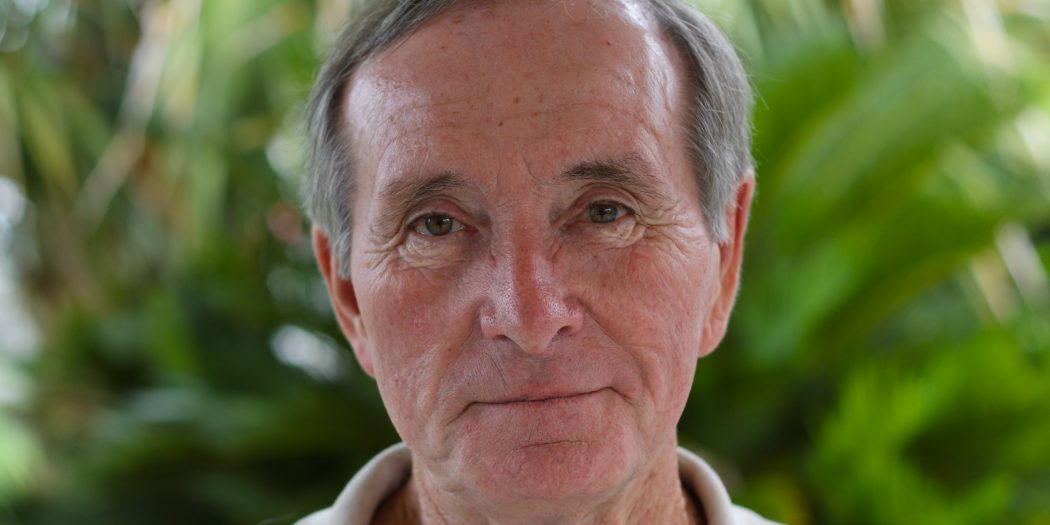 Tom Curtis spends some of his days at the Veterans Park in Ocala, where he helps veterans returning from this century’s wars. “You can just talk to them. You can help… That’s why I like it here,” he said during our conversation there on Aug. 16, 2017.

What was your educational background?

High school. I went into the service — Army. Volunteered.

Where did you do your training?

What was your parents’ reaction?

My dad said, ‘You don’t like heights. You can’t fly.’ I did. And I don’t. I looked at it this way. This is ground. And it’s wet. And it’s jungle. Going up. I did, and I made it. Went to two different schools to do it, and I got there.

Where did you arrive in country? What did you think?

Chu Lai. The culture’s different. People are smaller. They eat things I wouldn’t think about eating. I had a nice mess hall, decent food. I did swipe from the Navy on a regular basis when I could because their base was right next to ours. It was, by far, better food, so I used it.

What were your main responsibilities?

I was in an aviation unit, in Hueys. I started out as a door gunner on the right-hand side. You take care of armament and don’t do any maintenance or anything. You do some cleaning. Then I moved over to crew chief, which is the left side. Then you do more maintenance than cleaning, let’s say. Flying is the same when you leave the ground. Everyone is expected to perform, and you do.

Do you remember your first contact with the enemy? Was it just muzzle flashes from a treeline?

Truthfully, I don’t remember. But that’s one of the things you see. The worst part is when you fly at night, and you don’t want to see it, because it goes right back to where you are. You can’t hide. Daytime’s different. You have a flash, but when you fire that first round at night, they know where you are. Of course, they know where we are in a Huey. You can’t hide that noise. It’s impossible.

A lot of times you would just go out and fly, and nothing would happen. Other days, it would be flying and you’d get into something for a little while.

A lot of times you would just go out and fly, and nothing would happen. Other days, it would be flying and you’d get into something for a little while. You only flew for two and a half hours, then you had to get fuel, but wherever you happened to be at that time, we knew where every fuel stop was and we went there. We didn’t go back to base. You didn’t return until the mission was over. You could fly all day and never do a thing except ride. Or, you could get out there within five minutes, hit stuff, and it was like a week. But it wasn’t. Scary.

Why do you think that is?

Because it was a small town and a tight community. My mother and father worked here and my sister worked here. We all went to school here. We grew up here. Of course, it was a lot smaller than it is now, but you couldn’t hardly walk down the street or go somewhere and didn’t see somebody you know. The road out there was a two-lane highway. I flew back from Fort Lewis, Washington, to Tampa. I wore my dress greens. I never got a nasty word, because my mom and dad worked here. We knew a lot of people, and it was a small town. They were just: ‘Hi. How you doing. Come on in. What happened? You doing all right?’

I still had a year and a half to go and went to Fort Polk, Louisiana, and worked in operations. That was for the guys that are just coming in. They’d get their uniforms, haircuts, all this stuff and with me about a week or 10 days and go on to basic training.

Did the war change you in any way?

Yeah. Things you don’t want to see or don’t care to talk about. But it didn’t make me hard. I got plenty of friends. I’m married. I got kids. So, no, I’m not doing that.

Now? What I’m doing? I like it. You can help here (at Veterans Park). You don’t have to do anything. You can just talk to them. You can help. Afghanistan is no different than over there (in Vietnam). It’s the same thing, different day. Doesn’t matter. That’s why I like it here.

You get fulfillment out of (going to Veterans Park in Ocala) as much as they do?

Absolutely. No doubt about it. I love it. I don’t do anything. I really don’t. We talk, but they’ll talk to you. They see that (military service) hat and go, ‘Yeah. Where were you?’