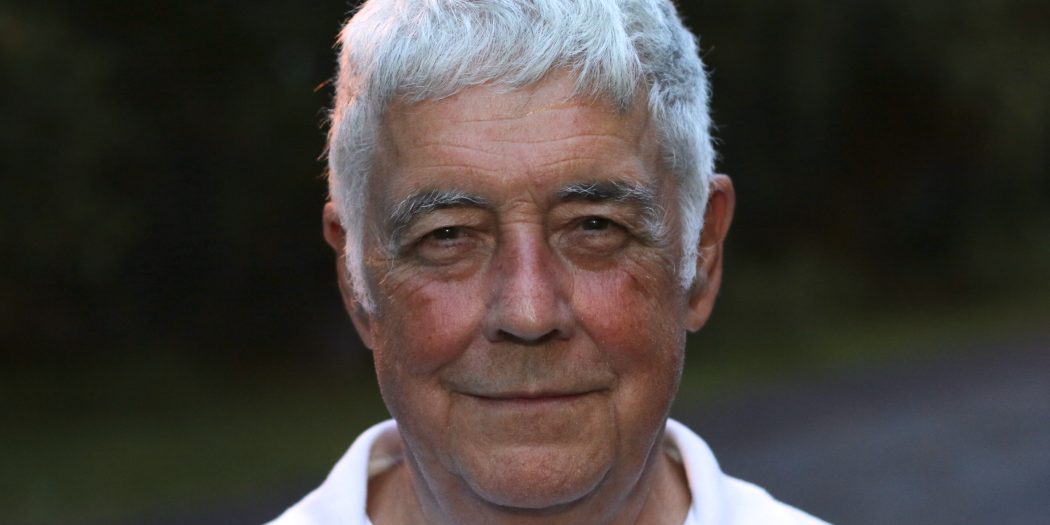 His plane once erupted up into a ball of fire as it hit the runway following a bombing run into North Vietnam — forcing him and another serviceman to eject — but that didn’t stop John Menoski from returning to combat missions the following week. He also once flew 40 missions on 40 consecutive days. Menoski now lives in Alachua and is a member of the Vietnam Veterans of American Chapter 1092 Alachua County. Our conversation took place at the group’s monthly meeting on Aug. 28, 2017, at American Legion Post 16 in Gainesville.

John Menoski. My birthday is on Feb. 2, 1943 — Groundhog’s Day. I was born in Sebring, Florida, in Hendricks Field, which was an Army Air Force Base for B17s back in WWII, and I was the only baby in the hospital at that time.

Where do you live now?

I live in Alachua. I’ve lived here about 13 years.

I went to undergraduate school at Ohio University and I majored in zoology. Graduated in 1966, April. Went into the military in April, and my career as far as zoology was cut short by the draft board.

Can you tell me when you first remember hearing about Vietnam and how old you were?

Which branch did you serve?

I served in the United States Ait Force.

Did you volunteer or were you drafted?

I was drafted and then I volunteered to avoid the draft.

Can you explain that a little bit more?

I was walking by the student union about six weeks before I was going to graduate and I graduated in January because I had to go an extra semester to get the extra hours. I had gotten my mail and I had a physical notice, which if you know what a physical notice is back then if you passed the physical, you were on your way. I was kind of all down and I walked by the student union and the Navy was giving tests for pilot training. So I took the test and passed and they sent me too Andrews Air Force Base the next weekend, and I passed everything, and they were going to enlist me in the Navy. So I called my Air Force recruiter and to make a long story short, I managed to get into the Air Force. So I went to what I call a 90-day wonder school, became an officer in 90 days from April 1966 to July 1966. Went to pilot training in Big Spring, Texas, graduated pilot training in 1967, went to KC135 — the Strategic Air Command — was stationed out of Spokane, Washington, in KC135. Spent 4 years and during that 4 years, I spent approximately two years in Southeast Asia flying refueling missions, refueling tankers and basically all the air operations in Southeast Asia for that period of time.

So where exactly did you serve in Vietnam or Southeast Asia?

When I was in tankers, basically there are two separate experiences I had because I flew KC135s for four years and became an instructor pilot in KC135. Flew missions out of Okinawa, Guam, and Thailand in support of all the operations in Southeast Asia. After the four years, I got an assignment to F4 phantoms. So I went into the fighters in 1971. I went over to Ubon, Thailand, in 1972, spring of 1972 and flew full combat mission from ‘72 until the end of the war. I’m not sure if you are familiar with Linebacker 1 and Linebacker 2, which was the war really was very hot during that period of time. Rather intense, when B52s bombed Hanoi. So basically in that year, I had 175 combat missions.

Can you describe your first contact with the enemy, VC or…?

Well, being in the fighters, there wasn’t really any real face-to-face combat. My first experience is when I got my combat assignment, and it was a very very hot time of the war. Things were really happening, they didn’t have replacements, and I can remember when you first arrived, you normally got an orientation flight, and they took you out and showed you and you checked in and you had to spend a couple of nights at the bar and that sort of thing. When I got there they were so desperate, I flew the next day, and I flew the next day with ordnance. In other words, I never carried a bomb in my life, and all of a sudden my first mission was a combat sortie.

How did that affect you?

I was scared to death. Not so much of being hurt, but just screwing up. I think the backseat guy with me, I think they probably had to point a gun at his head to go with the new guy because you are going to send me out with this guy? So ya, it was kind of like that.

Did you know other people that were on the ground that suffered casualties?

Yes, I had classmates in college that went and didn’t come back. A very good friend in high school, who was a West Point graduate on his third tour, was killed. So I had quite a few friends that I lost. Yes.

Can you explain some of the ways the war changed you, mainly your attitude towards the country?

Not so much toward the country. It certainly changed your scale of what was important and not important anymore. I think that tends to happen to anybody. When you come back after that, when you know your life is at stake every day and you live so fast and when you come back things are very important to some people are no longer in your world anymore. In other words, nothing is important because it doesn’t kill you. That’s a hard adjustment because no one can relate to it. I think everyone goes through that.

What are your memories of how the nation treated Vietnam Veterans when you came back?

It was very sad. I was rather fortunate myself because I came back alone, in civilian clothes and when I came back, and I had to get ready to go to Japan for four years, so I really wasn’t exposed to a lot of it. I was kind of insulated from it because I went overseas and I wasn’t in the US for another four years.

What was your reaction when you got on the plane to leave Vietnam permanently?

Is there anything else you want to talk about that I didn’t ask you?

I don’t think so other than, I hate to get into long war stories, but if there is anything you want me to…

What is your most vivid war story?

Well, my most vivid war story was I had to peel out on the runway on one mission. We took off on a night mission…2-Strike was going into North Vietnam, took off and had a problem with the canopy so it was unlocked and I had to keep everything. It was at night and I had a full load of ordnance, which basically was six 500-pound bombs and about four thermite bombs on the center line. It was just routine landing, came back, burned off fuel. I landed and for some reason, there was a malfunction in the hydraulic system and the wheels were locked on landing and I thought everything was fine and all of a sudden there was a light, everything was kind of glowing and I looked out and there were these flames going out from both gears. Pretty soon, the airplane looked like a meteorite object going down the field because the thermite bombs which are sitting on the center line which don’t sit too high above the runway, started dragging on the runway and of course these thermite bombs just come in a canister. They are kind of the same things they dropped on Japan back in World War II. They are magnesium, so the plane just went into a ball of fire. We ejected on the runway at about something under 100knots. What is amazing about that, how they talk about how everything slows down, I can remember every fraction of a second of the ejection. I can see myself going out of the airplane and watching everything like it was in slow motion. That’s the adrenaline thing. I can remember the seats separating out and I’m looking up at the shoot to open, when the ‘chute opened, I looked down just enough to see where I was and then I hit the ground.

What happened to the plane?

The plane kind of went off on its own and exploded. It was kind of a spectacular sight for the local town to look at.

How did you get back into a plane the day after or the next time?

Well, it was about a week later. No injuries…

Actually, I was OK, really. My back-seater didn’t do a very good landing fall and he broke his knee, but that was the worst we had.

What surprised me the most how you remember the episode and I still do. I can just go through the whole thing. It was all over in about 2-3 seconds, but it seemed like a long time.

We got shot at a lot. I took probably some battle damage on a couple occasions and during linebacker 2 was sand missiles. Had to do another emergency landing at a marine base over in Thailand that night. We lost all our hydraulics.

In very short explanation is everyone you see people are angry, a great percentage of people I hang out with are still angry at something. I always like to tell them people have been dying for people, kings and whatever, for thousands of years. I’m sure the Roman heirs up in Germany back when Caesar was up there were sitting around a camp fire complaining about what are we doing here? So nothing really changes. We are what we are.

It was a war that didn’t have to be fought. There were lots of people with egos out there that thought that we were winning the war, and they were really out of touch with what was really going on. We were supporting a regime that was wasn’t really interested either. We ended up losing anyway, which we I think if you read any of the things from (Neil) Sheehan — a lot of these people, the authors, basically were reporters at the time that wrote about it. I wish they would have written about it long before now. But yeah, if you look back on it, it just kept going because they wanted to not admit they were losing. I think basically the war was probably lost, the realization of it probably being lost was by 1964 and ‘65. Most people already knew we weren’t going to win that.

Morgan is a reporter who can be contacted by calling 352-392-6397 or emailing news@wuft.org.
Previous Florida Voices: Vietnam Veterans | John Lavelle, Army, 1971 to 1972
Next Feds Put Fraudsters On Notice

Just before 11:30am, NASA Launch Director Charlie Blackwell-Thompson called off Saturday’s attempt to get the …