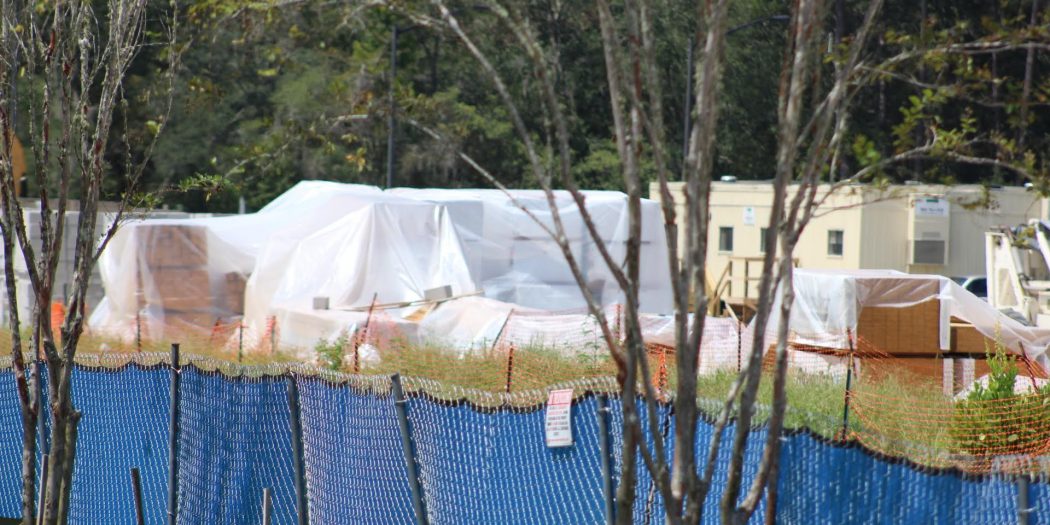 Gainesville Companies Bracing For Debris Ahead Of Irma

Living in Miami when Hurricane Katrina hit in 2005, her parents didn’t put up shutters, and the winds from the category 1 storm lifted a rock and smashed one of their windows. They spent the rest of the storm hiding in their bathroom.

So when Wilma, a category 3 storm, neared about a month and a half later, they were ready. Lacayo was in elementary school at the time, and the damage shut off her power for about four days.

“I thought it was great,” she wrote in a text message, “because my parents got work off and got to spend time with my sister and I, so we took it as a little vacation.”

But with Hurricane Irma approaching Florida, the 21-year-old University of Florida senior is more fixated on the cracked window than any possible vacation time. Because when she wakes up in the morning and walks into her living room at Gainesville’s Varsity House apartment complex, she sees a construction site covered in loose wood, concrete and rocks a sidewalk-length away from her third-story window.

If Irma brings hurricane-force winds to Gainesville, she said she and her roommates plan to stay elsewhere to avoid more cracked windows, or worse. But Brian Leslie, president of the company overseeing the construction of the Aloft hotel near Hull Road and 34th Street that Lacayo can see from her room, said as far as debris from the site, she shouldn’t be worried.

The company, Charles Perry Partners, Inc., is one of multiple construction groups in Gainesville bracing for potential damage caused by debris from Irma. Utility companies are also preparing for the same debris, but rather than trying to tie it down, they’re preparing for when tying it down fails.

Leslie said his group started preparations earlier this week at sites across the state, Gainesville included.

Extra crews have been dispatched — with eight workers sent to the hotel — to help relocate plywood, cinder blocks, portable toilets and anything else that could be picked up in a storm. Workers at the hotel near Varsity House were seen removing two-by-fours with a crane as well as placing tarps and weights on larger materials early Thursday afternoon. Leslie said crews will also remove the windscreen that covers fences at his company’s construction sites because if not, they’ll function as “a sail, when it’s all said and done.”

He added the plan was to be finished with preparations by Thursday night, but if necessary, crews could continue into Friday. On Friday morning, debris was still present and the windscreen was still up near Varsity House.

“It’s really just a lot of common sense,” he said, “and looking through the project trying to tidy everything up, strap everything down and be prepared for what’s coming.”

Crews will also work to brace the existing structure at the hotel, which currently has a ground floor surrounded by concrete and a second floor made almost entirely of wood, to try and prevent any pieces from being torn off.

University of Florida spokesman John Hines said construction crews at the school will do the same. They plan to be done with preparations for wind damage at noon Friday, and with good reason.

The National Weather Service classifies any winds of 50-60 mph or above to be “damaging winds,”  so Hurricane Irma doesn’t need to be a Category 5 in Gainesville to pick up debris or damage buildings. And if it’s going to do any damage, it’s likely to be from wind rather than rain.

Unlike Hurricane Harvey, which devastated the Texas coast with nearly 50 inches of rain in multiple places, Irma is moving too fast to have a similar effect, according to UF geography professor Corene Matyas. An expert on hurricanes said the rainfall from Harvey accumulated because Harvey was stuck in place. One day after landfall, it was measured at 2 mph.

Irma was measured at 16 mph per Thursday’s 11 p.m. advisory from the National Hurricane Center, and it isn’t expected to linger like Harvey did once it reaches Florida.

“There can still be some heavy rainfall rates as some of the bands of the storm pass over an area,” she said, “but those rain rates should then move off at a quicker speed than we saw with Harvey.”

But even with relatively little rain, if winds are tropical storm-force, she advised they can still cause damage, move debris and knock down trees. Clay Electric, which provides power to 14 counties in north Florida, is preparing for that possibility.

Mattox said once winds reach 35 mph, workers will wait out the storm to avoid accidents. Once winds drop below that threshold, they’ll begin restoring power. They’ll also have help, Mattox said, from utility companies from Alabama, Mississippi and elsewhere, who will send workers to Florida to help out.

He added that even with Irma being more powerful than storms like Hurricane Matthew and Hurricane Hermine, there hasn’t been much panic.

“Everybody knows their role,” he said. “This is not our first rodeo when it comes to dealing with a major storm.”

Ethan Bauer is a reporter with WUFT News. He can be reached at ethanandrewbauer14@gmail.com or at 305-439-5080.
@ebaueri
Previous Floridians Urged To Remain `Vigilant’ As Irma Approaches
Next Ohio Animal Rescuers Clear Florida Shelters Ahead Of Irma