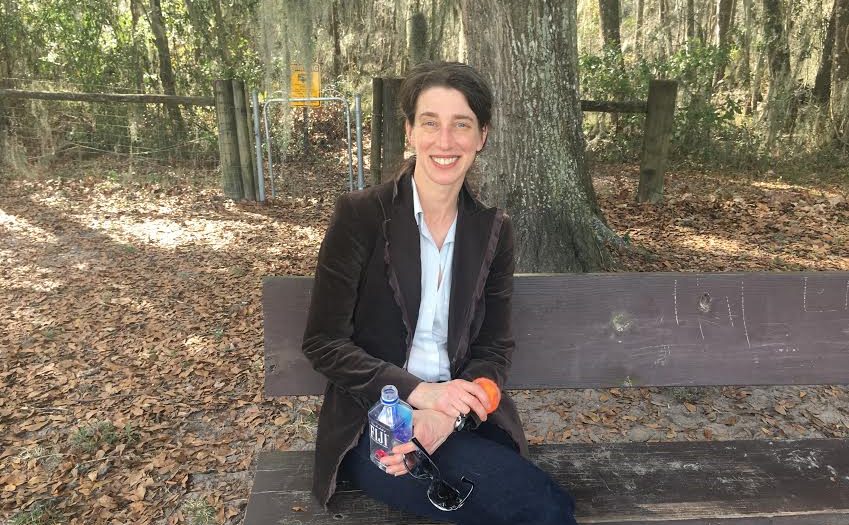 Alexandra Horowitz is a New York Times bestselling author who focuses her studies on dog cognition. She is a professor at Barnard College and operates the Horowitz Dog Cognition Lab. Horowitz helps people better understand what dogs are thinking by studying dogs in their natural settings. She also studies how they utilize the millions of olfactory receptors in their nose to “see” the world.

Horowitz was interviewed by Jessica Schein, a reporter for WUFT.

JS: What initially sparked your interest in dogs and dog cognition?

AH: Well, I had always loved dogs. I always lived with dogs. I had a sensitivity to dogs and was interested in their well-being, but I didn’t consider it something that I would pursue professionally until I got into grad school and started studying non-human animal cognition, and then dogs turned out to be a perfect subject.

JS: In your book “Inside of a Dog: What Dogs See, Smell, and Know,” you research dog behavior and the strength of a dog’s senses, particularly the nose. How does a canine’s nose impact its everyday actions?

AH: Entirely. It’s the first way in which the dogs are experiencing their environment, so instead of being wrought of things we see, it is primarily wrought of things they smell. I think it’s something we still don’t know entirely about, what that means in terms of what the scene looks like, in other words, smells like. They are sensitive to things that we might not perceive and that’s what we explain according to what we can see. That can lead to some communication problems between dogs and owners.

JS: What was your most surprising discovery in each of your books “Inside of a Dog: What Dogs See, Smell, and Know” or “Being a Dog: Following the Dog into the World of Smell” when researching and writing?

AH: I think just the way the olfactory perception can change their sense of the world is surprising to me. The example I sometimes give is that I imagine that since dogs can tell differences in very minute amount of odor concentrations, tracking dogs can tell the difference between the first and fifth footstep and tell which way someone went. They are really smelling the time that has passed in the scents that have been laid down. So, they are smelling something about time, which is hard for us to imagine, but seems really interesting.

JS: Your current research in dog cognition at the Horowitz Dog Cognition Lab at Barnard College focuses on olfaction, or the sense of smell in domestic canines. What current experiments are happening and what recent discoveries have you made in the lab?

AH: The one we just finished is the one that I described in the lecture, which was about self-recognition and whether I could use an olfactory medium, an odor, that represents the dogs smell themselves, and see what they would do with it when they run into it in a context they don’t expect and whether they notice it has been changed.

AH: One of the things which is sometimes disappointing to people is that all these attributions we make to dogs are not necessarily true. Just because we have a very strong feeling that our dog feels guilt or pride or jealousy, often we haven’t really tested that assertion. Part of my research is saying… bring some science to this and observe our dogs before we make those attributions. There is nothing that I have discovered which shows that dogs are cognitively uninteresting, but we treat dogs as though they are just versions of people and sometimes people are disappointed to discover that that is not the case, even though it seems obvious.

JS: You speak about anthropomorphisms in your book “Inside of a Dog” What are the human-like traits we have attributed to dogs?

AH: Emotions of secondary emotions. We feel like they know basically what the rules of the house are as soon as they come in and move in with us, which makes zero sense. They have the same desires as we do. They want to have a birthday party… that they want to dress up in a costume or that they need a raincoat if it goes out. We give all the feelings that we have about the world to our dogs.

Horowitz spoke at the University of Florida discussing “Inside the Mind of a Dog: Asking Dogs” on Jan. 18 and gave locals the opportunity to bring their dogs to Forest Park to play and interact on Jan. 20.

Jessica Schein is a reporter for WUFT News and can be reached at (352)-392-5551 or jschein@ufl.edu.
Previous 18 Dead Amid Reported Tornadoes, Other Storms In The South
Next Cuban Pianist Chuchito Valdes: Live on WUFT-FM’s Viernes Social