Ralph Rutledge, 61, lives with lung cancer. He used to ride the bus at least an hour each way from East Gainesville to his doctor appointments at UF Health Shands. (Briana Erickson/WUFT News)

Ralph Rutledge had four tumors on his vocal cords. Lung cancer. As a regular patient, he spent close to six hours a week on a bus. Two connecting routes – three times a week – from east Gainesville to his doctors at UF Health Shands, he said.

“It took longer than I wanted it to,” the 61-year-old scoffed, pressing an artificial stoma, an indent of pink flesh at the bottom of his neck, to talk. His doctors removed his vocal cords.

Rutledge, a 40-year resident of Gainesville who doesn’t own a car, said he now only goes to the doctor once a year. The biggest problem living on the east side is “medical, getting back and forth to the doctors,” he said.

While UF Health Shands officially opened its new emergency center in west Gainesville last weekend, the facility has left some residents questioning the availability of services on the east side of town.  The Kanapaha emergency room would mark the second on Archer Road and the third to be built in west Gainesville.

For people who live on the east side, there is one non-emergency medical center on Waldo Road, a health department and a clinic on Main Street. They all close at 5 p.m.

Another alternative, Equal Access Clinic, is open to east side residents from 6 p.m. to 9 p.m., twice a week, to help alleviate the need for primary care.

UF Health Shands officials say data shows that primary, or preventative, care is what’s critical for the east side, not emergency care. But those on the east say they need more.

Had his daughter gotten a CT scan once a month, doctors might have noticed the cancer come back, said City Commissioner Charles Goston.

His only daughter, Schorale, died last October from Squamous Cell Carcinoma, the second most common form of skin cancer. The tumorous, cancerous mass on her face had spread to her sinus cavities, Gaston said. By the time doctors caught it, it was too late to successfully treat the 40-year-old, he said.

When he ran for office in 2015, the District 1 commissioner made his platform to bring more medical services to his constituents in east Gainesville.

“There are people on the east side with serious illnesses who don’t get any priority,” Goston, 65, said. “We should have one [emergency room] right here in our neighborhood 24 hours a day.”

Goston, who grew up in east Gainesville, said the community has been deprived of services for over 50 years. While there are some primary care clinics, weekend and after-hours services are not readily available, Goston said. And, a lot of residents on the east side are without transportation.

They are forced to find a ride, take a bus to the emergency room at Shands across town, or call 911 for an ambulance, which can be costly, Goston said.

The CEO called the emergency center part of a “journey” to assess the needs of Gainesville residents and bring care closer to the community.

“Every community has a different need, there isn’t a one-brush stroke fits all,” he  said, explaining that UF Health officials often talk to folks to understand the needs of the community when it comes to new medical care facilities.

According to Jimenez, the hospital’s confidential statistics show that primary care treatment in east Gainesville would prevent the need for emergency services and named the health department, the clinic on Waldo and the Main Street locations as efforts to meet that need. The reports, he said, tell where the patients come from, when they enter the emergency centers and what services they need.

On the southwest side of town, North Florida Regional Medical Center is currently undergoing plans for a new emergency center at Newberry Road and Parker Road, scheduled to open in April 2017. After that, another is targeted for Millhopper Road and 43rd Street, according to John Gerhold, chief operating officer.

“We see a huge need, especially as you look at patients who may have complex diseases, strokes, heart attacks, things of that nature, from rural areas,” Gerhold said.

But, he said, east Gainesville is still on their radar.

“Our end goal is to make sure we serve the community, that’s what we’re here for,” he said. We’re absolutely open to looking at other options in east Gainesville.”

About a month ago, three nurses from UF Health Shands met with Commissioner Goston to talk about medical services for east Gainesville.

The nurses, managers at the hospital in their respective units, had just embarked on a year-long fellowship and community outreach project.

One of the target zones that came up as an area of need? east Gainesville, said Peggy Marker, one of the nurses involved in the project.

“It was one of the hot spots,” Marker said, referring to east Gainesville’s rate of admissions and mortality, based on the hospital’s annual statistics. Marker is manager for the 4 West Trauma Intensive Care Unit at UF Health Shands.

She got involved in the fellowship to get out of her comfort zone and pursue a project that normally wouldn’t be done in the nurses’ current roles, said Marker, who compiles data about the needs of east Gainesville residents when they arrive at the emergency room.

She reached out to Goston to see his perspective of what the needs of east Gainesville were. Come to find out, some of his constituents weren’t aware of the primary care options on their side of town, Marker said.

One of the goals of the project is to evaluate needs and raise awareness to people on the east side of what to look for in terms of recognizing signs and symptoms of a stroke, high blood pressure and weight gain. East Gainesville residents who come to the emergency center have incidents such as toothaches, STDs and fevers, which Marker said could probably be taken care of at a primary-care clinic.

At the same time, Marker said she hopes they can reduce emergency room visits by increasing awareness of primary care services within east Gainesville and eventually finding a solution that is available after normal business hours. Another goal is to keep residents healthy with preventative care, versus getting to the point where they’re sick and need to have access to emergency care, Marker said.

After Alachua General Hospital closed in 2009, Dr. Nancy Hardt, the then-professor of obstetrics, gynecology and pathology at the UF College of Medicine, started a study on health disparities in Alachua County.

The study analyzed health care outcomes by neighborhood, births to women whose pregnancy and delivery care was paid for by Medicaid, low-birth-weight births, infant mortality, rates of sexually transmitted infection, child maltreatment and death rates by selected causes, such as diabetes, heart disease, cancer and stroke.

“[Alachua General] had a really vibrant emergency room that met the needs of those who lived in east Gainesville, it was considered their go-to place for emergency services,” Hardt said. UF Health Shands tried to accommodate those needs, she said, “but that doesn’t mean the community perception is that all their needs are being met.”

The communities’ access to primary health care is directly related to whether they have insurance or not, in both east and west Gainesville, Hardt said.

“Just because there are medical facilities, it doesn’t mean that people can use them,” she said, adding that emergency rooms are not the place where primary care should be carried out.

“Once they’re directed to go to an outpatient clinic, thats where the problem arises,” Hardt said. “If they don’t have insurance, they can’t get into that clinic.”

Providing care to the underserved

On a gray Wednesday evening at the Equal Access Clinic at Bartley Temple United Methodist Church in east Gainesville, a young woman who didn’t speak English wandered inside for free primary care treatment.

Frank Alexander, 58, of east Gainesville parked his truck down the street to seek treatment for the swelling on his chest, arms and face. It was an allergic reaction to magnolia trees, he said. This was his second time at the clinic.

Cassie Hickman, 24, got her blood pressure taken as her boyfriend looked on.  She stubbed her now-bruised foot and needed a doctor’s note for the medical boot she was wearing. It was her first time at the clinic.

“She’d went to the health clinic before and they closed at 5,” said her boyfriend, Nathan Sharlaw. “By the time I’m off work and she’s off work, you know, we can’t make it,” he said of the other primary care clinics in the area.

Vishal Goswami, director of Equal Access Clinic, looked on as at least 10 patients got treated by UF medical students behind privacy curtains. Some got their temperature and blood pressure taken while children scribbled on their homework and waited for their parents.

Goswami, a fourth-year medical student, oversees the clinic on the east side, one of four in Gainesville that are strategically located in the most underserved parts of the city, he said.

Every Wednesday for the past four years, the clinic has provided services to east Gainesville from 6 p.m. to 9 p.m.. Just recently, on Tuesday nights, the clinic offered its services at the east-side clinic on Waldo Road.

The east Gainesville location was strategically chosen from state census data showing which parts of Gainesville had the highest rates of STDs and unplanned pregnancies, Goswami said, “and for that reason, we felt that this place really required care, a service that wasn’t necessarily being provided here.”

Goswami weaved through the room of the church, talking to patients and helping find the best treatment for them. Some have to be refused and referred to the emergency room, he said.

Most of the patients that come to his clinic walk or ride the bus to the location, Goswami said, which makes it especially hard when they have to be turned away. The steady flow of people sometimes means the clinic reaches capacity.

“You grow to appreciate all the different factors and challenges that our patients are going through just to get here,” Goswami said “But we know the demand is greater than what we are filling right now.”

There is a need for both primary care and emergency care on the east side of Gainesville, Goswami said of what he’s seen during his years in the clinic.

Paul Myers, health department administrator, said most patients who come to the east side location seek short-term care for illnesses, such as colds or injuries. At times, the department will address emergency care so patients don’t have to go to the emergency room, Myers said.

But sometimes patients’ blood pressures are too high and they have heart conditions that require them to go to the emergency room, which happens as often as once a week or every two weeks, he said.”

“We see them, and we take care of them, unless we don’t have the capabilities,” Myers said. “Then, we call them an ambulance.”

Myers couldn’t comment on whether an emergency center coming to those residents would be beneficial. As for building one, UF Health Shands CEO Ed Jimenez said it would be considered if annual data presents a need for an emergency service.

“We’ll continuously revisit what we know,” Jimenez said. “Maybe there’s a time and a place for an emergency facility.”

Briana is a reporter for WUFT News and can be contacted by calling 352-392-6397 or emailing bri.rose561@gmail.com.
@brianarerick
Previous Florida Begins Digging Out After Matthew
Next Podcast: East And West Gainesville’s Healthcare Divide 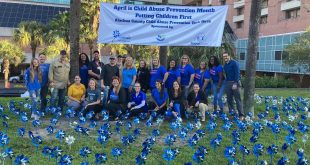