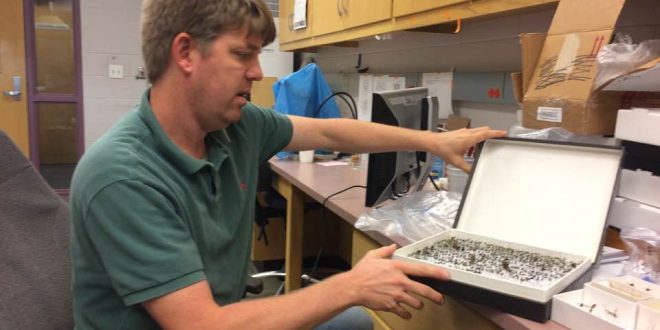 University of Florida entomology researcher Joshua Campbell examines hundreds of species of different bees on Monday in Steinmetz Hall at the university. Though protections have been been put in place for Hawaiian bees, Campbell said several of Florida's species also need protections. (Maggie Lorenz/WUFT News)

As Hawaiian Bees Go On Endangered List, Florida Struggles With Its Own

Wildlife officials and researchers are on a mission to save some of the nation’s busiest workers.

In a first for the U.S., several species of yellow-faced bee have been moved under the protections of the Endangered Species Act.

The U.S. Fish and Wildlife Service added the seven species — all in Hawaii — to its federal endangered list Friday after years of research concluded the insects are under threat.

But University of Florida entomology researcher Joshua Campbell said other bee species, including several in Florida, need to also be considered for protections under the act.

“We already have many, many rare species of bees even in Florida,” he said. “It’s just that the federal government has not put them on the actual endangered-species list. But there are other bees that are being considered.”

Possible causes of the declines include: the overuse of pesticides, parasite introduction and disease, he said.

“If you’re looking at native bees [across the U.S.], we have seen within the last 50 years a drastic decrease in a lot of their numbers and their overall range,” Campbell said.

Modifications to habitat are another problem, he said.

“About 70 percent of native bees nest in the ground,” Campbell said, “and farmers till that ground and destroy nesting structure.”

The International Union for Conservation of Nature and Natural Resources’ Red List includes “hundreds of bee species that have declined significantly in abundance or [in] their range,” he said.

“In the eastern half of the United States, there are a lot of bee species that probably should be on the endangered species list and are not,” Campbell said.

Honeybees, which aren’t native to the U.S., are also under threat. They’re continuing to die off in great numbers, with a decline over the last year of 44.1 percent of all colonies managed by beekeepers, according to preliminary results from the annual national survey of honey bee colony losses.

Third-generation beekeeper Ray Latner he has heard of colony losses among fellow Florida beekeepers to be as low as 20 percent and as high as 80.

“We’re absolutely struggling to maintain numbers, there’s no doubt about that,” said Latner, branch manager of Dadant and Sons in High Springs.

But bees’ function goes beyond what honey contributes to commercial products for humans.

Campbell noted that about 70 to 80 percent of all flowers in the world rely on bees or insects to produce seeds. And farms around North Central Florida committed to sustainability efforts also heavily depend on bees for pollination.

“We rely on the bees for pollinating pretty much all of our crops that are fruiting” to avoid the use of synthetic fertilizers, said Noah Shitama, owner of Swallowtail Farm in the city of Alachua. “Pretty much any time we’re growing anything that requires pollination, we’re counting on them.”

“That’s definitely a mechanism through which we can preserve our own future a little bit better because, ultimately, if we don’t have pollinators, we’re not going to have food,” Shitama said. “It’s as simple as that.”

In the meantime, Campbell and other UF entomologists continue to research ways to boost the number of bees and other pollinating insects, like butterflies, around the nation.

Campbell is involved with Operation Pollinator, a program that works to feed bees and promote natural pollination by planting strips of native wildflowers adjacent to crops.

Planting wildflowers “feeds native pollinators pollen and nectar,” Campbell said. “So you’re hopefully building these populations back up, and at the same time, you’re drawing in other pollinators who then stray out into other crops, spreading pollination.”

“We’re always going to use pesticides, but are there ways we can modify some of those practices to benefit bees?” Campbell asked. “That’s what I’m passionate about: finding ways that we, as humans, can co-habitate with a lot of these insects we depend on.”

Maggie is a reporter who can be contacted by calling 352-392-6397 or emailing news@wuft.org.
Previous Deputy Willcox To Be Suspended For Death Of K9 Partner
Next Florida Votes 2016: State House District 10