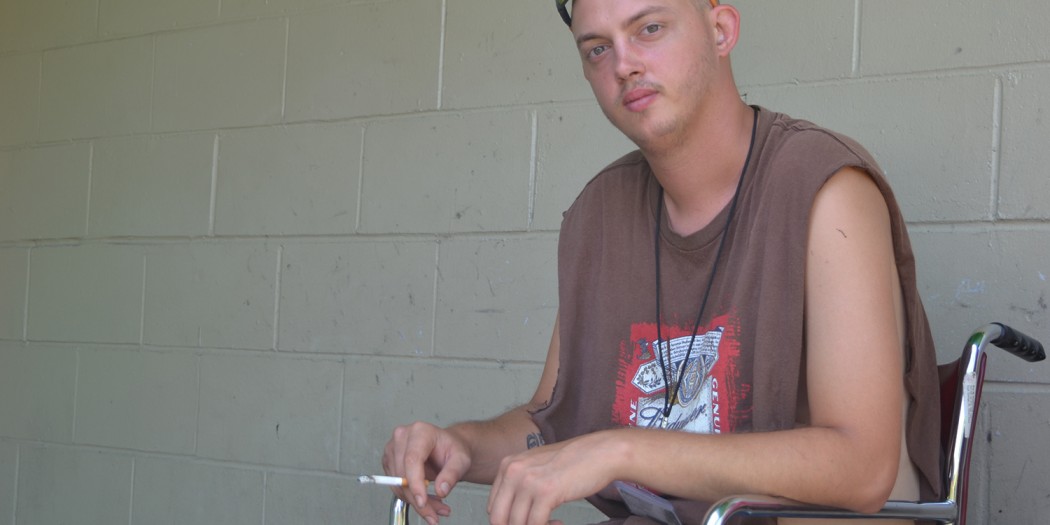 William Todd waits for lunch at GRACE Marketplace. Todd, who is 23-years-old, was discharged from the Marine Corps after sustaining an injury after being hit by a grenade. Todd was honored with a Purple Heart and a Bronze Star Medal for his services. (Lauren Johnson / WUFT News)

Ten years is a long time, but for Gainesville and Alachua County, it’s barely enough.

At the time, Long said other cities and counties around Florida were developing collaborative community plans to eradicate homelessness within a 10-year period.

Theresa Lowe, executive director of the Alachua County Coalition for the Homeless and Hungry, said the U.S. Department of Housing and Urban Development pushed for cities and counties to look at the issue of homelessness as a community and to come up with a comprehensive plan to eradicate homelessness within 10 years.

“Ten years is a short time in some ways, and a long time in other ways,” she said.

Long said about 200 people attended Gainesville and Alachua County’s first community summit meeting in 2003 to address the issue of homelessness.

At the meeting, elected officials from other communities presented active 10-year plans to assist in modeling a plan for Gainesville and Alachua County, Long said.

“You had this energy,” he said. “But you had to have the political wheel to be able to implement the recommendations.”

Volunteers identified issues presiding over homelessness by observing what was happening within the Gainesville and Alachua County communities, said Lowe.

Those who volunteered to develop the 10-year plan were aware of the issues surrounding homelessness, Lowe said, but they were unsure of the root of each issue.

Solutions to some issues were obvious; however, other solutions required more research.

“It is one thing to identify a problem,” Lowe said. “But it is another thing to figure out why (it is) a problem.”

In 2005, Gainesville and Alachua County officially adopted a 10-year plan to end homelessness.

“It’s easier to end a problem if you have a plan,” Lowe said. “Otherwise you’re just throwing things at a wall seeing if it sticks.”

The city and county decided to name the plan Gainesville Region/Alachua County Empowerment, or simply GRACE, for the homeless, according to the official plan document.

“It was good that the entire community came together,” she said. “It brought together groups that typically don’t work together.”

The 10-year plan to end homelessness is comprised of short, medium and long term goals with target dates to which goals should be reached.

Long was a visionary for the plan and said that the long-term, strategic objective in any plan handling homelessness is to find permanent housing for people.

According to the 10-year plan, Gainesville does not have a shortage of housing, but rather a lack of affordable housing.

Lowe, who became involved with the 10-year plan in 2010, said there will always be people who are or become homeless.

“The goal is to be able to locate people as they become homeless and get them back into housing as quickly as possible,” Lowe said.

Early into the 10-year plan, an implementation committee was established to monitor the execution of the plan and give quarterly reports to the city and county commission, said Long, who served as a chair on the committee for five years.

“To me, my job was done once we got the plan approved by both the city and the county, and we started moving along and monitoring the goals and the objectives,” he said.

An Office on Homelessness was also created to implement the 10-year plan. However, the office closed in 2013, according to Lowe.

The cornerstone of the 10-year plan was to increase access to services through a one-stop center. However, creating a one-stop center took nearly 10 years to complete. It did not open until 2014.

“It’s a great plan, but then you have to implement it,” Lowe said. “And a lot of it was implemented, but it took sometime to get things done.”

To begin the process of creating a one-stop center, which consolidates any sort of day-to-day services a homeless person may need into one location, Gainesville and Alachua County first needed to locate a site for the center.

“We knew it was going to be a heavy lift,” Long said. “Because no one wanted to have a one-stop facility in their neighborhood.”

Originally designed to serve as a storefront with service providers, the vision of the one-stop center grew more complex over time causing the completion of the center to be delayed, said Lowe.

The vision of the one-stop center remains the same, just expanded, said Lowe.

Securing a location also served as a cause for delaying its completion.

Long said the location of the center could have been donated or bought, but the city and county ultimately purchased the Gainesville Correctional Institution for about $1 million in 2013 with an intention to renovate.

Alachua County Commissioner Robert Hutchinson said, “In the big scheme of things, eight years is maybe not that long, but it sure seemed like a long time.”

Hutchinson became involved with the 10-year plan in 2010 and said the city and county took too long to find a location because of citizens who were oppositional toward having a one-stop center in their neighborhood.

“You could say there was a lack of courage on the part of some of the elected officials,” Hutchinson said. “That they should’ve just shoved a homeless camp down the throat of some neighborhood, but they didn’t.”

Long said he was not involved with the negotiating or purchasing of the prison because he did not agree with spending $1 million on a facility that would need renovations.

About a year after its purchase, GRACE Marketplace opened its doors in 2014 as Gainesville and Alachua County’s one-stop center.

“As the cornerstone of the plan, we’re still here…we’ve finally got it open,” Lowe said. “And now we’re starting to do what was envisioned in the plan.”

As of 2016, the up-and-coming budget for the next fiscal year estimates at a little over $2 million dollars due to an increase in people and providing additional services, Lowe said.

“We’re not expecting the city or the county to foot that entire bill,” she said.

Lowe said the city and county provide about 44 percent of GRACE Marketplace’s funding. The Alachua County Coalition for the Homeless and Hungry, which manages GRACE Marketplace, funds the additional 56 percent through grants and donations.

Though not satisfied with the cost or the near 10 years it took to complete, GRACE Marketplace is a success story, Long said.

“It is up to others now,” Long said. “To be able to take what was started by many of us and continue to improve.”

As GRACE Marketplace concludes another year of providing services to the homeless, the city and county set their sights toward moving people into permanent housing in place of shelters.

“So the focus is shifted a little bit,” Lowe said. “Although it still relates to getting people off the streets.”

The deadline of the 10-year plan to end homelessness was in 2015, but Gainesville and Alachua County only just began to experience a steady decrease in their homeless population.

Once the 10th year of the plan to end homelessness passed, the city and county transitioned to using a Continuum of Care Program to further the goals set by GRACE.

According to the U.S. Department of Housing and Urban Development, the Continuum of Care Program promotes communities coming together to end homelessness by quickly re-housing homeless individuals.

Hutchinson said the Continuum of Care Program is a system that deals with the issues a homeless person may have regardless of where they are or what they need.

“The Continuum of Care figures out where you need to be in the arc of services that we have,” Hutchinson said.

Even though most of the issues presented in the 10-year plan have been addressed, a lot of things can change in 10 years, Lowe said.

She said the 10-year plan focused on individual problems of homelessness, while the Continuum of Care Program focuses on the issue of homelessness as a system.

“So now we’re looking more at strengthening our service providers, making sure that the services they are providing are actually effective,” Lowe said. “And that they are making the best use of the dollars that they have.”

Lowe said the Continuum of Care Program solves issues based on need, rather than perception.

Gainesville and Alachua County’s Continuum of Care Program is referred to as the Alachua County Coalition for the Homeless and Hungry, said Lowe.

Gainesville City Commissioner Helen Warren, who became involved with the Alachua County Coalition for the Homeless and Hungry earlier this year, said the state would rather allocate funding toward re-housing homeless people than providing only shelter.

“It’s kind of like we had to change the direction of our drift, or the sailing of the ship,” she said.

Warren said the city and county need to reiterate to their homeless population that GRACE Marketplace and its neighboring tent city, Dignity Village, are only transitional places.

“We are not talking about setting up a permanent camp village,” Warren said.

Gainesville and Alachua County is one of the five communities in the north central region of Florida that is working under a larger Continuum of Care Program, said Warren.

She said the Alachua County Coalition for the Homeless and Hungry is in its beginning stages of moving away from utilizing temporary housing as a tool to end homelessness toward assisting people with permanent housing solutions.

“A big part at what we are looking at now is transitioning from what was the old pattern,” said Warren.

During the 10-year plan, the city and county focused on providing services to the homeless population before tackling the issue of permanent housing. The Alachua County Coalition for the Homeless and Hungry looks to establish permanent housing as its first priority.

“Everybody wants independence,” said Warren. “There’s so much dignity and confidence that’s available when people are living in a home other than on the streets.”

Hutchinson said more mature communities have found that prioritizing permanent housing above emergency shelters, like those provided at GRACE Marketplace, prove to be more effective when dealing with homelessness.

“That model is tried everywhere, and it doesn’t ultimately solve homelessness,” Hutchinson said. “Homelessness is solved by giving someone a home.”

The U.S. Department of Urban and Housing Development denied giving the county $200,000 in funding for GRACE Marketplace because it realized emergency shelters do not end homelessness, said Hutchinson.

Warren said it cost about $50,000 per year for every homeless person in Gainesville.

The city and county could save hundreds of thousands of dollars if both can assist with transitioning homeless people into permanent housing, according to Warren.

The key to transitioning homeless people into housing is to identify landlords who are willing to provide affordable housing, Warren said.

“We’ve got to get more affordable housing,” she said. “And help them connect with resources if they are eligible, or with a job so that they can pay for it and have that independence.”

“Even with the 10-year plan, we were working in a fragmented way,” she said. “We weren’t really looking at the whole bigger picture.”

“It was a good plan, but it was still looking at the pieces,” Lowe said. “So now were trying to take more of a global look at what we are doing.”

Previous Tesla Releases Statement As Car Accident Is Still Under Investigation
Next July 4, 2016: News In 90