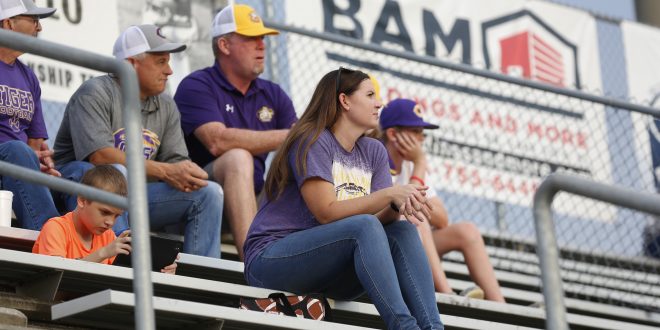 Lynsey Edge, a Columbia County resident, sits in the stands before a Columbia High School football game in Lake City, Fla. Friday, Sept. 17, 2021. Edge, whose son is a wide receiver for the team, said that it was scary for her to think about what could have happened at games before the county implemented new safety measures at all sporting events. (Julia Cooper/WUFT News)

Alongside tumbling cheerleaders and the distant sound of rolling drums, an increased number of Columbia County Sheriff’s Office deputies and signs that read “No Backpacks Allowed” were present as the Columbia High Tigers played the Englewood Rams on Sept. 17.

New safety measures for all Columbia County School District athletic events went into effect on Sept. 10, following a spate of gun violence in Lake City. The Columbia County Office of Safe Schools, along with the superintendent and members of the sheriff’s department, began drafting plans for increased safety over the summer when community members became aware of the spike in gun violence.

Those safety measures were kicked into gear after the second Columbia High School football game on Sept. 3, when a 14-year-old and a 15-year-old brought three guns, one of which was stolen out of Marion County, to the stadium. After a game attendee approached deputies with information that someone might be armed, the two teenagers were stopped at one of the stadium’s entrance gates because officers could see bulges in their waistbands that were confirmed to be firearms during pat down searches. The teenagers were arrested with no complications and the football game went on, according to Steven Khachigan, the sergeant public information officer for the Columbia County Sheriff’s Office.

All students are now required to show their school IDs upon arrival at events, backpacks are prohibited and all children in eighth grade and under must be accompanied by an adult at events starting after 5 p.m. The number of sheriff’s deputies acting as security has also increased at all sporting events.

This represents the first of three phases of protocols the district is prepared to establish, according to Judy Tatem, the Columbia County director of school safety.

The second phase of security measures might include checking all guests in with security wands and metal detectors and requiring that all handbags are see-through. The third would only allow the parents of players to attend.

She said that she does not anticipate initiating phases two and three as they hope the current first phase will be effective enough. However, Tatem said that she and her team have spoken to companies about acquiring metal detectors if gun violence in the community escalates.

“If we feel like our procedures aren’t strong enough, that we’re still getting pushback,” Tatem said, “then we could initiate it today.”

The Columbia County Office of Safe Schools, which was implemented through the Marjory Stoneman Douglas High School Public Safety Act in 2018, employs case managers that track and trace safety threats involving students. This includes keeping a database of information on students that have committed crimes and informing the principal and guidance counselors of those instances. The office also provides mental health and mentoring services to kids that are flagged for requiring counseling, including a program called Take Stock In Children. Tatem says they are always looking ahead to how schools can be made more secure.

The community is on edge in terms of public and school safety after the threats, said Steven Khachigan, the sergeant public information officer for the Columbia County Sheriff’s Office.

“We can assure people that we as the sheriff’s office have worked very closely and have a good relationship with our school district,” Khachigan said. “And we’re very vigilant.”

The Lake City Police Department experienced a 19.6% increase in their violent crime rate from 2019 to 2020, according to a Florida Department of Law Enforcement Uniform Crime Report. From Jan. 1 to Sept. 23 of this year, Lake City police responded to 102 calls about discharged firearms in the city. Of which, 25 were verified to be actual gunfire. That’s a rise from 96 for the whole year of 2020 and only 9 cases of verified gunfire.

Khachigan said that he believes it requires cooperation from the community for law enforcement to properly respond to cases of gun violence.

“We certainly are in tune with our community,” he said, “We would just encourage people to, you know, continue to have that relationship. For the most part, our citizens and our deputies have a very good, positive relationship.”

Parents of Columbia High School students, like Rolando Dominguez, are concerned with how the increase in gun violence affects young people. Not only does he worry about it on the football field, where his son is the kicker for the team, but also at work.

Dominguez, who is also the medical director for the Lake City Medical Center, said the hospital went into a lockdown on Sept. 10 when a 22-year-old was shot near Young’s Park and later passed away from his injuries.

He doesn’t want situations like this to be the reason he isn’t able to see his son play at the stadium.

“This should be a place where everyone comes to enjoy and there shouldn’t be a threat of violence,” Dominguez said. “But there is.”

Julia is a reporter for WUFT News who can be reached by calling 352-392-6397 or emailing news@wuft.org.
Previous Marion County Coach Led Track Athletes To 2020 Tokyo Paralympics
Next Alachua County Legislative Delegation Hearing Hears 2022 Session Requests From Politicians And Constituents