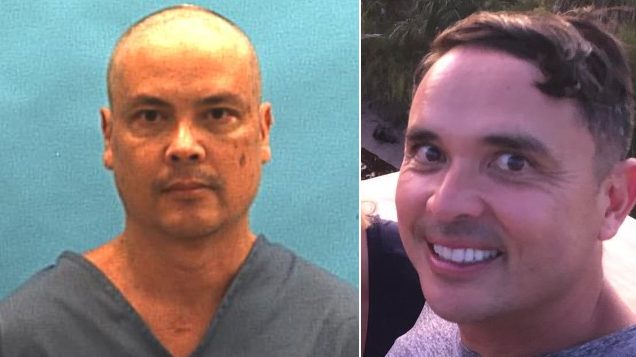 On the right, Paul O. Reinhart, 46, of Gainesville, Florida, is seen in this selfie he posted to his Facebook account on Sept. 13, 2019. Reinhart is suspected of killing his two young sons and himself on May 4, 2021, in his family's burning vacation home near Suwannee, Florida. On the left is Reinhart's older brother, Erick Von Reinhart, 49, as seen in this undated photograph from the Florida Department of Corrections after he was sent to prison in December 2018. Erick Reinhart pleaded guilty in November 2018 to second-degree murder in Pasco County, Florida, in the stabbing of his ex-wife's new boyfriend.

Editor’s note: This story includes descriptions of suicide. If you or someone you know is considering suicide, contact the National Suicide Prevention Lifeline at 1-800-273-8255.

TAMPA, Fla. – The father suspected of killing his two young sons and himself this week inside a burning luxury vacation home in western Florida is the younger brother of a convicted murderer who also tried to take his own life in a similarly violent household attack seven years ago.

Paul Otto Reinhart, 46, was a successful executive of a medical device sales firm and living in a $900,000 home in Gainesville until his world began unraveling: He lost his job as president of his namesake company, Reinhart Medical LLC, and he was recently separated from his wife of nearly 20 years, Minde Reinhart, 42.

Now, authorities say, Reinhart is suspected of killing his sons, Brody, 11, and Rex, 14, early Tuesday at the family’s waterfront home near Suwannee on Florida’s west coast, 50 miles from Gainesville, before setting it on fire and killing himself. The case is still under investigation.

Meanwhile, Paul’s older brother Erick Von Reinhart, 49, sits in a Florida prison as a convicted murderer in a crime with eerie parallels: Erick was arrested in 2014 after fatally stabbing his ex-wife’s new boyfriend – just one week after their divorce – then trying to take his own life with a large kitchen knife. Paul’s former sister-in-law, Amy Reinhart of Lutz, hid inside her family’s home during the attack and called 911.

Amy Reinhart was stunned by the news of Paul’s actions when a reporter visited her home north of Tampa. She said she wasn’t ready to discuss the crimes.

Erick Reinhart was sent 29 months ago to Calhoun Correctional Institution west of Tallahassee after he pleaded guilty to second-degree murder in Pasco County, near Tampa. His brother Paul financed Erick’s legal defense, said Regine Iliff, the mother of Alex Iliff, 33, who died in the attack. She remains in touch with Erick’s ex-wife, who confirmed to her the two were brothers.

Iliff said she had heard news reports this week about the father suspected of killing his children and himself but did not know until a reporter told her that the suspected killer was Paul, the younger brother of the man sentenced to 40 years in prison for killing her own son.

“That sounds so much like Erick,” Iliff said, her voice trembling. She said she still struggles to discuss her son’s death.

“My heart is broken, aches all the time,” she wrote in a letter to the judge in August 2014. “His loss has turned my life upside down, and the world as I knew it will never be the same.”

In prison, Erick did not immediately respond to a reporter’s message asking him to discuss his brother. In court papers, Erick described himself as diagnosed with a “major depressive disorder and severe anxiety.”

In the stabbing in 2014, deputies found Erick bleeding from his neck and stomach from self-inflicted stab wounds on the bathroom floor after he had killed Iliff. Amy Reinhart was not hurt in the attack. The Pasco County sheriff, Chris Nocco, said Erick pleaded with deputies, “Kill me, kill me,” but he was hospitalized and pleaded guilty in November 2018.

Erick left his own children, then 5 and 6, home alone during the attack, authorities said.

After he was sentenced, Erick complained to the judge that his defense lawyer had been ineffective, saying his brother had uncovered important information she had missed during the discovery phase of the court case. He said he would have agreed to a 25-year prison sentence.  The judge in December denied his request for a shorter prison term, but a new request is under consideration. Erick’s lawyer, Lisa Baker McLean of Tampa, declined to discuss the case because there was a pending motion in court.

Erick is expected to be released from prison in September 2053.

This story was produced by Fresh Take Florida, a news service of the University of Florida College of Journalism and Communications. The reporter can be reached at thomasweber@ufl.edu

Thomas is a reporter for WUFT News who can be reached by calling 352-392-6397 or emailing news@wuft.org.
Previous Pop-Up Offerings At Paynes Prairie? Temporary Food Trend Reaches Gainesville
Next The Point, May 7, 2021: Middle Schools in Alachua County Could Soon Become Vaccination Sites