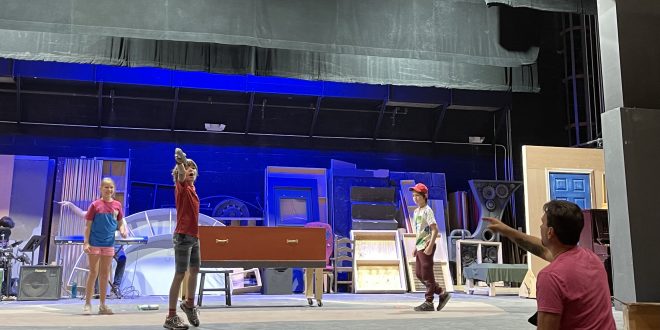 Charlotte Curtis, Noah Preble and Kenna Blackburn practice “Come to the Fun Home” while director Dan Christophy reviews the choreography. The musical number is a homemade commercial for the Bechdel Funeral Home made by the Bechdel children. (Grace Banahan/WUFT News)

‘The World Isn’t Against You:’ Gainesville Community Playhouse Returns To Musicals With ‘Fun Home’

After more than a year, the Gainesville Community Playhouse is putting on its first musical since the start of the pandemic.

Its show, “Fun Home,” will run from April 8 to 25. It follows the life of cartoonist Alison Bechdel as she comes to terms with her sexuality and her relationship with her closeted father. The cast features nine actors, with three of them playing Bechdel at different points in her life.

The show’s director, Dan Christophy, has been involved with the playhouse since 2000 and has directed over a dozen shows in that time.

Christophy says that masks will be required for audience members and they will be socially distanced of six feet in all directions in the theater.

“We are going to keep the audience as safe as possible,” he said. “They should be able to come out, have a good time and feel safe.”

Other precautions have been taken by the theater, including holding virtual auditions and requiring temperature checks and masks for rehearsals.

The playhouse in March 2020 canceled the remainder of its theater season, which included the shows “Oliver” and “the Odd Couple.”

Christophy said the theater plans to instead produce “the Odd Couple” this June and will attempt to start a season in September if safety protocols are lifted.

If a season does occur, the playhouse will recover two of last year’s canceled shows.

“Two of the shows would be the same, ‘Oliver’ and ‘the Producers,’ and the rest of the season would be chosen after that,” Christophy said.

Christophy said the thing he missed most about live theater was getting to interact with other people.

“Fun Home” discusses feelings of repression and dealing with trauma. Christophy hopes the audience will take away a little understanding and compassion from the production.

“Just because someone presents a certain side of themselves that doesn’t mean that there’s not a lot going on inside,” he said.

Georgina Vitola will be making her Gainesville Community Playhouse debut as Alison Bechdel.

This is the 21-year-old psychology major’s first theater performance since 2016, although she is a member of the University of Florida’s acapella group Tone Def Acapella.

Vitola plays Bechdel at 43 years old while she is writing her graphic novel memoir. She thinks of her character as headstrong and honest.

“At its core, the show is about how [Bechdel] and her dad deal with the same set of circumstances,” Vitola said. “Her dad is very repressed, but she is very open and honest about herself.”

Vitola said she’s learned through playing Bechdel the importance of being honest about who you are and being proud of it.

“The theme of the show is about being true to yourself,” she said. “I think everyone can take away something from watching it.”

Listen Below: “Fun Home” cast member Georgina Vitola discusses the theme of the show as it relates to the relationship between Alison Bechdel and her father.

Kaplan, 17, plays medium Alison, who is a college freshman coming to terms with her sexuality.

Kaplan, a Gainesville High School student, said that being a part of this coming-of-age production was an exciting change from the junior productions she participates in at school.

Her favorite part of the show is her solo, “Changing My Major,” which comes after Alison has her first sexual experience with a woman.

“It’s like an ‘Aha!’ moment for her,” Kaplan said. “She’s really discovering who she is.”

Kaplan wants the audience to know that coming to terms with your sexuality isn’t isolating.

“I hope the audience, especially people who are struggling with coming out, learns that it’s okay and you’re always going to have someone to support you, even if it doesn’t feel like that in the moment,” she said. “The world isn’t against you. You can be who you are and it’s OK.”

Kaplan hopes this show marks a beginning to more mature productions at the playhouse. A show she would like to see done in the future is “Heathers: The Musical.”

“I think that a lot of people don’t realize how deep the meaning is,” Kaplan said. “There’s been a lot of experiences with domestic terrorism and safety in schools in recent years. I think Heathers would be a good show to do because people don’t think about the heavy topics that the show stands for.”

Performances will be held Thursday to Saturday at 8 p.m. and Sunday at 2 p.m. from this Thursday through April 25.

Grace is a reporter for WUFT News who can be reached by calling 352-392-6397 or emailing news@wuft.org.
Previous An Accident Took A Boy’s Ability To Walk. A Community In Ocala Wants To Give It Back.
Next Gainesville And Duhok Students Design Sister City Sculpture As Potential Confederate Statue Replacement