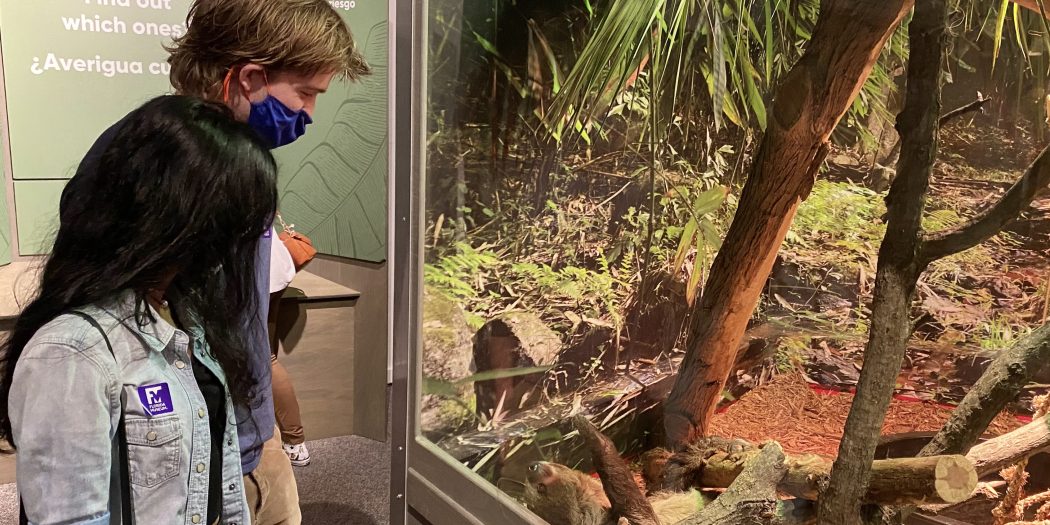 Neha Mathew (front), 18, and Connor Haley (back), 19, admire Flash through the enclosure wall. Tickets to the “Survival of the Slowest” exhibit are free for UF students who show a valid Gator1 card. (Hannah Shelton/WUFT News)

The sloth at the Florida Museum of Natural History’s new exhibit is far outpaced by the urgent enthusiasm attendees have shown during its opening week.

Starting Saturday, visitors got a first look at the museum’s newest exhibit, which features 16 live animals that have utilized their seemingly disadvantageous characteristics to stand evolution’s test of time.

The exhibit will run through Sept. 12. During its nearly eight months, the entry doors will welcome guests in a socially-distant fashion from Monday through Saturday from 10 a.m. to 5 p.m. and 1 p.m. to 5 p.m. on Sunday.

According to Julie Waters, the Exhibit Coordinator at the Florida Museum of Natural History, over 900 people visited the exhibit on opening day.

She said the museum staff anticipated a spike in visitation during opening weekend, so employees took extra precautions in planning measures to keep the guests, animals and staff members safe during the pandemic.

“We’re able to keep track of how many people attend through a crowd-control system, and we’re doing everything we can to make sure people are having a good time… but also make sure everyone is doing it safely,” Waters said.

The same health guidelines will be followed until its closure in order to “be inclusive and give everyone the same experience, regardless of what day they come.”

Waters said safety was important at the exhibit because it was first intended to debut in September, but was “absolutely impacted by coronavirus.”

“As you can imagine, museums across the globe all had to make major changes, and ours was no exception,” she said. “We’ve been planning this exhibit for two years now… and we are really excited to finally be opening it.”

To keep people safe and the exhibit open, attendees must wait in a socially-distant line and be admitted one at a time.

Once inside the venue, everyone is required to wear a mask at all times. There are also socially-distant markers and hand sanitizer stations scattered throughout the exhibition room.

These caretakers, animals and exhibit are supplied by Little Ray’s Nature Center, an exotic animal rescue based in Canada that provides educational programs and traveling shows in North America.

“The keepers are animal care experts,” Waters said. “They are constantly monitoring the animals to make sure they’re safe and their needs are taken care of. They’re also at the exhibit to interact with our visitors to answer questions and give presentations about the animals.”

Keaton Hannen, one of the two onsite animal caretakers, started his first day as an animal interpreter at the grand opening.

“I’m excited to show guests animals they don’t get to see as often,” he said.

Hannen spent the day educating visitors about the characteristics and survival strategies of animals at the exhibit. He talked in particular about Fred, a bearded dragon that spent the day relaxing on Hannen’s arm and soaking in the attention of guests.

“Fred is a super funky critter,” Hannen said. “He used to be a pet until his owner couldn’t take care of him anymore. Now, Fred is a teacher at exhibits like this.”

In addition to Fred the Bearded Dragon, the exhibit also features turtles, frogs, snakes and a sloth.

Flash, a five-year-old Linnaeus’s Two-toed Sloth, is the focal point of the exhibit who garnered much attention despite being asleep for most of the grand opening.

According to Delivis Niedzialek, the other onsite animal caretaker, Flash’s sloth species typically sleeps for 15 hours per day, remains motionless for 20 hours per day, and they are “the slowest and weakest mammal on Earth.”

Despite his lack of movement and need for speed, Flash inspired guests like Claudia Brown to visit the museum for the first time.

Brown, a 28-year-old Gainesville resident, said she learned about the exhibit through Facebook and wanted to see her favorite animal in person.

Connor Haley, a 19-year-old mechanical engineering student at the University of Florida, said he frequently visits the museum but stumbled across the exhibit as “an unintentional happy accident.”

“I usually go to the Butterfly Museum next door because it’s free and good for my mental health,” he said, “but when I parked and saw this exhibit was going on, I just had to check it out.”

Haley explored the museum’s “Megalodon” exhibit in September 2020, but he said he preferred the “Survival of the Slowest” exhibit because of the live animals.

Waters said she was also the most excited about the live animals aspect of the exhibit, especially because they are slow-moving creatures that “challenge visitors to think about what it takes to survive.”

“When you hear things about survival of the fittest, you automatically assume that means strong and fast,” she said. “In featuring animals that use survival strategies that aren’t generally considered the ‘best,’ we teach our visitors about the relationship between animals and the environment.”

Hannah is a reporter for WUFT News who can be reached by calling 352-392-6397 or emailing news@wuft.org.
Previous The Point, Jan. 28, 2021: ‘Two Masks Do Work Better Than One’: Experts’ New Advice For Stopping COVID-19 Spread
Next DeSantis Rolls Out $96.6 Billion Budget Plan