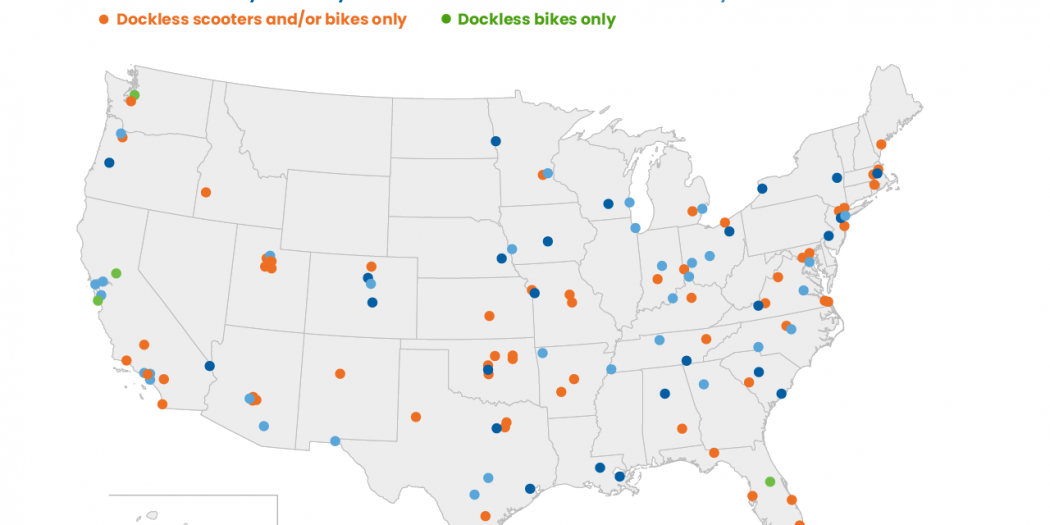 The map, compiled by NACTO, shows the number of shared micromobility programs across the United States.

The Gainesville City Commission is nearing approval of an ordinance regulating the use of a new e-scooter sharing program nearly two years after it was first proposed.

In early March, before COVID-19 fully wedged its way into people’s lives and minds, commissioners approved the e-scooter ordinance on first reading. A second reading was canceled due to the pandemic, subsequently pushing it to the back burner.

But on Thursday night, the ordinance got another chance when city commissioners voted unanimously to approve it on a re-advertised first reading. A second reading is set for Dec. 3. If it is approved — and it likely will be — micromobility services like Bird, Lime, Razor or Spin can begin submitting applications for a yearlong permit as early as January.

Deborah Leistner, the city’s public works planning manager, said that, in coordination with the University of Florida, Gainesville could expect deployment of scooters by late April or early May. She noted that this end-of-the-semester date would allow the city to gradually ease into the program.

The proposed e-scooters look like the Razor scooters of decades past, but they’re sleeker, faster, and motorized. And they’re being used in over 100 cities nationwide. Gainesville could be among the next.

Throughout the world, micromobility is being hailed as the smarter, more sustainable future of public transportation. And dockless, battery-powered scooters, which are largely accessible and intuitively easy to use, are at the heart of this trend.

But the proposed ordinance on dockless scooters, devices that allow users to begin and end their trips at any authorized location, could remedy this issue.

The ordinance itself does not look much different than it did in March. It still states that no more than three micromobility services will be permitted to operate within the city at any time. Each vendor can bring an initial fleet of 100 to 200 scooters.

It requires potential vendors to have an operation plan including information about maintenance and staffing as well as an education plan to inform users of scooter safety, parking rules and Florida law.

Though ride prices will ultimately be dependent on the vendor whose permit is approved by the city, the average cost is $1 to unlock a scooter and 15 cents for every minute the scooter is used. The ordinance also requires a 15 cent per ride fee paid by the vendors to cover the costs of the regulatory program.

Scooters will be limited to a maximum speed of 15 miles per hour and will operate between 6 a.m. and 10 p.m. Program staff will be responsible for collecting and redistributing the scooters afterwards in an effort to ensure they are not strewn haphazardly around the city.

The one potential modification of the ordinance came from Commissioner Adrian Hayes-Santos, who motioned to expand the scooters’ hours of operation to 24 hours a day.

“If you’re able to scoot around a little faster than walking when it’s late at night, I think it’s safer,” he said.

However, the motion failed, with commissioners Saco, Simmons, Johnson and Mayor Poe voting against it. They agreed that implementing the pilot program as written in the ordinance, with set hours in place, allowed for the city to more subtly and easily adjust to it.

After the community gets used to seeing the scooters around, Poe adds, then the city can decide to expand in hours, locations and number of devices available.

“I think philosophically I agree with you Commissioner Hayes-Santos, but what I want to do is just get this thing out and operating,” Poe said. “It’s a lot easier to expand than contract”

Commissioner Simmons agreed with Poe, saying she is not interested in expanding the program to 24 hours when it hasn’t yet been piloted.

What she is interested in is making sure the program is affordable and accessible to everyone in the community.

“Once we have the vendors in place and have all the policies in place, we make sure that the vendors offer this at a reasonable cost for folks that can’t afford it,” she said.

Her concern is not uncommon. In cities across the country, e-scooters tend to be placed in downtowns and near tourist destinations to increase ridership. Unfortunately, this means that people with limited access to mass cost-effective transportation are not able to reap the benefits of public-use scooters as easily.

The ordinance addresses this issue. It aims to promote equity goals by requiring that at least 10% of the scooter fleet be placed in a low-income zone. It also states that micromobility services should have a variety of options to ensure accessibility for unbanked users, like cash payment or waivers for initial rental deposit.

Micromobility at the macro level

Some people might say that Gainesville is arriving late to the micromobility party. In fact, there were 136 million shared micromobility trips in the United States in 2019, according to a report by the National Association of City Transportation Officials (NACTO). Eighty-six millions of those trips occurred on scooters.

Over the last few years, dockless, e-scooter sharing programs have been sprouting in cities as far as San Francisco and as close as Orlando, Tampa and Tallahassee. Pre-COVID, Americans’ use of shared electric scooters was up 60% from 2018.

But then the pandemic came, and the world stopped moving. It threatened the financial stability of shared micromobility services.

Despite this jarring halt – and the dramatic drop in public transport use that came with it – e-scooter programs in Florida cities have had quiet success.

Orlando launched its scooter share pilot program in January 2020 and is currently averaging about 50,000 scooter trips per month, according to Samantha Holsten, the city’s public information officer.

And although Lime and Bird drastically reduced their fleets and for a time this year stopped operating in Tampa, the city deemed e-scooter businesses essential. Though concerns about sanitation remain, Spin still operates there and sanitizes scooters as often as possible. The scooters are seen as an alternative mode to public transportation that allows for social distancing.

So, although the pandemic rages on, it has not completely deterred the micromobility movement.

Gainesville is gearing up.

Hannah is a reporter for WUFT News who can be reached by calling 352-392-6397 or emailing news@wuft.org.
Previous Reopening of Gainesville Fine Arts Association Helps Struggling Local Artists
Next The Lede || Season II Episode XVIII: Looking Towards a Positive Future