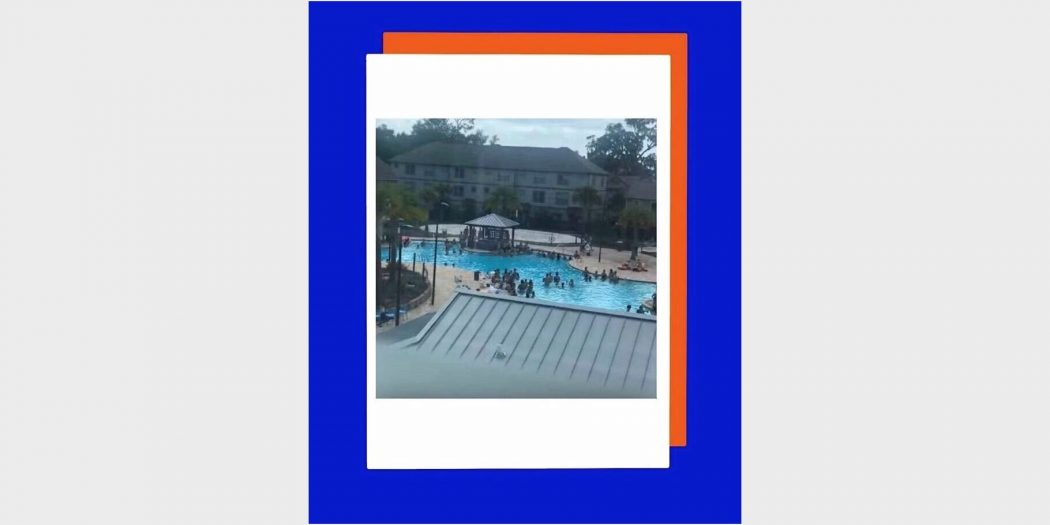 Students without masks crowd into a pool at a Gainesville apartment complex. The image was captured and shared with a now-defunct Instagram account to highlight the behavior of students as COVID-19 transmission continues in the community. (Photo courtesy of @maskoffuf)

Holly Donohue didn’t find @maskoffuf on Instagram. It found her.

The 20-year-old elementary education junior opened her inbox in early September to see a follow request from an account she wasn’t familiar with — complete with a profile picture of a cartoon alligator wearing a mask.

And when she clicked on the account, photo after photo of students packed into a tight shot at parties or clustering on the side of the street appeared. Fascinated, Donohue followed back immediately, she said.

Just two weeks later, though, the account would be shut down for violating Instagram’s guidelines, burying its photos and 1,100 followers. Its creators say they are still fighting to get the account back online — and have created a replacement in the meantime.

“There are students who really don’t get it”: The account’s life, death and rebirth

@Maskoffuf was created by two UF students, but both of them wish it didn’t have to exist.

During the summer, the two said they went through months of walking around town, watching others not wearing their masks correctly — whether it be tucked under their chin in the middle of a packed grocery store or removed entirely to talk to someone.

“We felt uncomfortable with the upcoming semester, not knowing how UF was going to handle all the students that just won’t comply correctly if it inconveniences them in the slightest,” they wrote in an emailed statement to WUFT. “So we started this account to hold people accountable.”

Since Aug. 24, @maskoffuf had posted over 10 photos and videos, most of them anonymous submissions from other Instagram users. The account creators themselves have remained anonymous. Pictures of students packed into pools, clumped together in the middle of sidewalks and posing shoulder-to-shoulder at parties came flooding into their inbox.

Some were taken sneakily from behind the cover of a car, or from a distance. Others were ripped directly from students’ Instagram accounts. In all of the photos, not a single person was wearing a mask.

The account’s managers were surprised by what they saw. Even summer’s experiences couldn’t prepare them for the photos they would receive, they said.

“We still thought, ‘Well, we go to UF, the top 7 public university. We should be doing better than other schools,” they wrote. “But there are students who really don’t get it.”

In the comment section, other students raged. Some tagged Greek organizations whose members were pictured, or the establishment where the packed event happened. Gainesville City Commissioner David Arreola joined in, asking his followers to submit photos to the page.

Still, others criticized the page, calling it unnecessary.

One of them was John Corlazzoli, a Florida State University student who commented on the UF-themed account. He found it after a similar account for FSU named @maskofffsu began to interact with @maskoffuf in the comment sections.

“Are you guys benefiting from trying to call people out? No,” the sophomore marketing major said. “All you are doing is causing conflict.”

Following the pattern, the UF students made a second account called @masksupuf while it bids for the original to be restored.

It only has a few dozen followers so far, compared to the 1,100 the previous one garnered.

Suspension to expulsion: The consequences of ignoring mask rules

The university itself has made it clear on where it stands with students who don’t follow mask procedures. These policies are outlined in UF’s Policy Hub, — that masks must be worn indoors at all times and outdoors if the space does not allow for six-foot social distancing.

The rules don’t just apply on campus. In an email to students and faculty, Vice President for Student Affairs D’Andra Mull said that the university has worked with city and county officials to “develop consistent expectations on campus and in the Gainesville community.”

If those rules are breached, a student could be subject to anything from suspension and fines to misdemeanors, arrest and expulsion.

WUFT reached out to Mull for comment about the account, but she did not respond as of publication time.

UF’s GATORSAFE app, a cell phone tool that connects students with police, has also added a function similar to @maskoffuf — students can anonymously report on others who are not wearing masks on campus, along with other COVID-19 concerns.

But GATORSAFE doesn’t have to worry about legal concerns like @maskoffuf does.

@Maskoffuf has been shut down once, and it could happen again.

According to Clay Calvert, director of UF’s Marion B. Brechner First Amendment Project, Instagram is not forced to follow the First Amendment’s free speech guidelines because it is a private company. Its own guidelines act as its laws.

That doesn’t mean other problems aren’t in play.

The first is where the photo was taken, he said. In court, people in public spaces don’t have any expectation of privacy. They can generally be filmed or photographed without worry.

But photos taken in private places like houses or businesses — especially without permission — can be questionable under the law. Both kinds of photos are present on @maskoffuf.

The source of the photos could also be a concern. Instagram’s guidelines demand that an account must have the rights to the photos they post — and copyright is established as soon as someone takes a photo, Calvert said. If that photo is posted somewhere else without the photographer’s permission, they could file a copyright claim with Instagram.

But @maskoffuf plans to post photos as long as people aren’t wearing masks — and as long as students like Donohue are there to support their cause of accountability.

“[The] reasoning for not wanting to wear a mask is so minuscule in comparison to the reasons to wear a mask,” Donohue said. “It’s a tiny piece of fabric over your face. It will cause you no inconvenience to just put the mask on and shut up.”

Florida Says It Will Give More Scrutiny To COVID-19 Deaths

The bonus is designed to reimburse teachers for the extra work and stress from new COVID-19 safety measures and from the required in-class and online options.